Cooper Landing told to be ready for quick evacuation 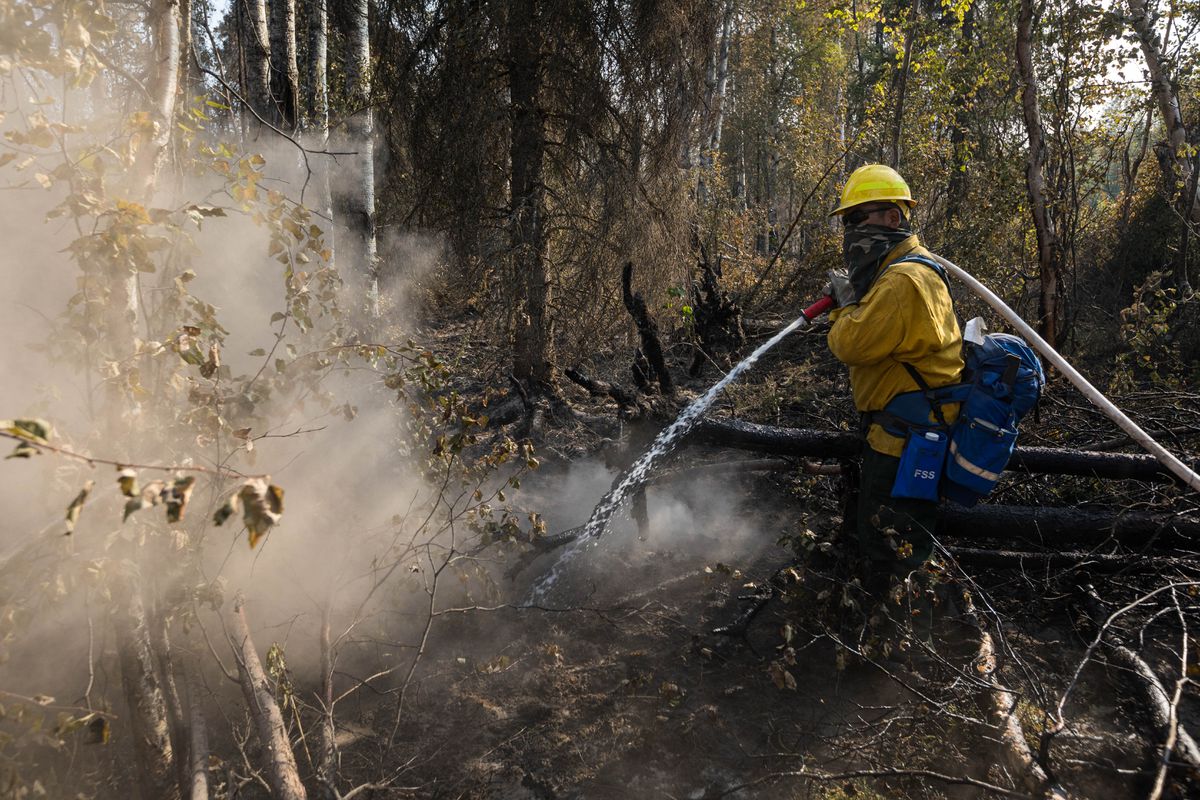 People in Cooper Landing were told Monday evening to be prepared to evacuate at a moment’s notice, a higher alert level than the area has seen over the past week as the Swan Lake fire on the Kenai Peninsula has grown.

Travel was not advised on the Sterling Highway between the Seward Highway and Watson Lake, from Mile 36 to Mile 71, the Alaska Department of Transportation and the Kenai Peninsula Borough said Tuesday morning.

On Monday, a motorist posted a video on YouTube showing flames roaring alongside the highway.

The upgraded evacuation status for Cooper Landing means people need to make sure they are prepared to leave with the things that are important to them — “the pets, the pills, photos, computers, anything they want to take with them,” Sexton said.

“This is a very dynamic situation," he said, and things can change quickly.

In the Susitna Valley to the north, people who evacuated their homes last week due to the McKinley fire north of Willow were allowed to re-enter their properties Monday, according to the Alaska Wildland Fire Information website. Evacuation notices that were in place along a stretch of the Parks Highway from about Mile 79 to Mile 92 because of that fire have been lowered.

Depending on the area, people there should still be prepared to leave within minutes of an evacuation notice or be on “ready” alert for a potential evacuation, the website said. The “ready" status for people in the area of Mile 76 to Mile 79 of the highway has been removed.

People should be aware of hazards including fire-weakened trees that can fall without warning days or weeks after a fire, ash pits that are hard to see and can cause severe burns, and downed power lines, the Alaska Division of Forestry said.

Crews made progress over the weekend on containing the 3,332-acre McKinley fire and another nearby blaze, and a state agency on Monday officially extended Alaska’s wildfire season a month longer than usual.

The wildfires burning in Southcentral Alaska come at an unusually dry, hot time for the region. Parts of the area are in an “extreme drought” for the first time, according to the U.S. Drought Monitor, and this summer has brought record-breaking high temperatures.

The Alaska Department of Natural Resources on Monday extended the end of Alaska’s statutory wildfire season to Sept. 30. The season usually runs from April 1 through Aug. 31. The extension means that small- and large-scale burn permits will be required for open debris burning or the use of burn barrels through the end of September, DNR said in a written statement.

The action marks the first time the season has been extended since 2006 legislation shifted the five-month fire season to start and finish one month earlier, DNR said. Feige “determined the one-month extension was necessary to ensure public safety.”

A post on the wildfire information site Monday said that “several firefighters on the McKinley fire and some community members have received severe injuries,” but that information was incorrect, acting Alaska Division of Forestry spokeswoman Liv Stecker said. Five firefighters have been injured in that fire, but those were minor burn injuries, Stecker said. There were also civilian injuries Sunday, she said, when people returned to evacuated homes before the evacuation order was lifted, but she did not have details on the number or degree of those injuries.

Matanuska-Susitna Borough School District schools that were closed for several days due to the fire will be back in session Tuesday, the district said Monday. Those include Talkeetna Elementary, Trapper Creek Elementary, Willow Elementary, Su Valley Jr/Sr High School and Beryozova School.

Some light rain fell this weekend on the Swan Lake fire, said forestry division spokesman Tim Mowry, but it wasn’t enough to make a difference in efforts to tame the blaze.

As winds shifted to northerly on Monday, fire crews started conducting backburn operations along a several mile stretch of the Sterling Highway “to reduce fire and smoke along the the highway," said Tim Jones, a public information official. The backburn would continue as long as winds allowed, he said.

The status of the highway is “subject to change at any time,” the state’s wildfire information website said Monday. Road closure information is available through the state’s 511 service. Sterling neighborhoods east of Feuding Lane and east of Adkins Road remain on “ready” notice, meaning people there should be prepared for a potential evacuation.

A state-ordered emergency burn closure for the Kenai Peninsula and Mat-Su boroughs remains in place. Gov. Mike Dunleavy on Friday issued a disaster declaration for those boroughs to provide help to people affected by the fires.

The North Fork fire northwest of Homer is 100% contained, Mowry said. The Caribou Lake fire, to the northeast of Homer, is 20% contained.