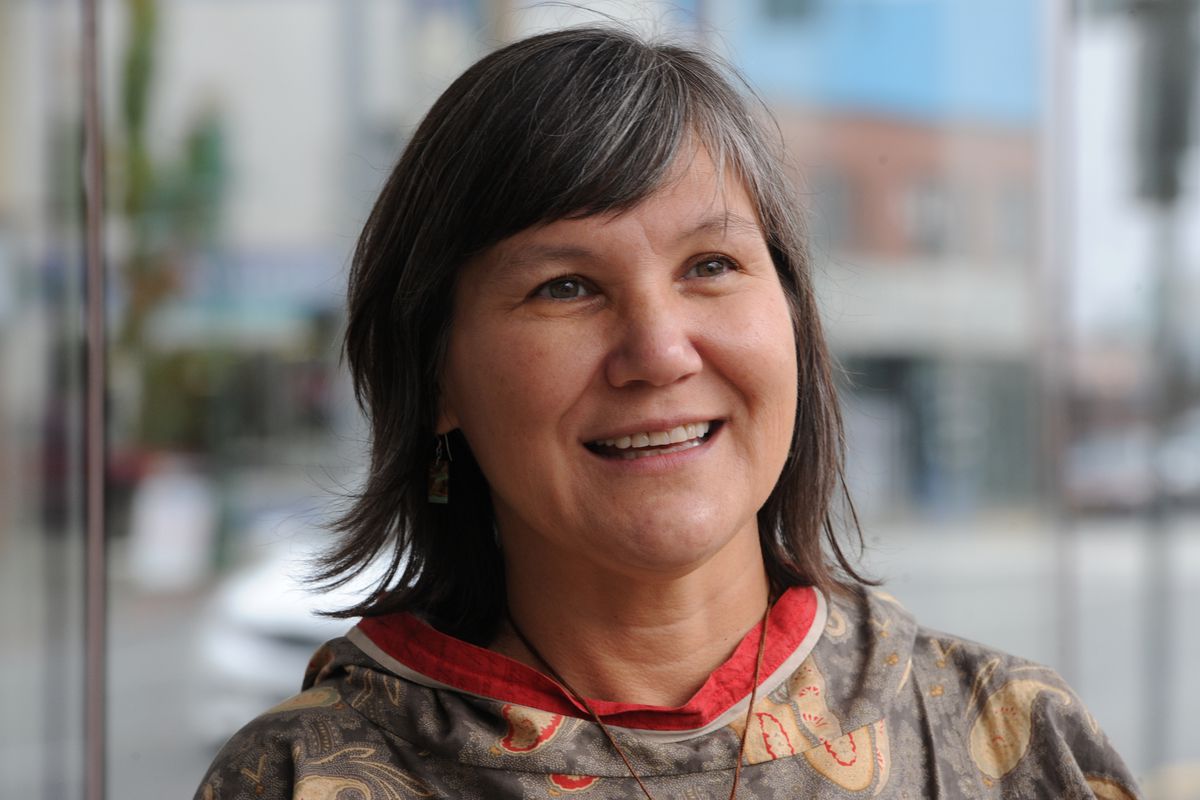 Language is at the center of this year’s 36th annual Elders & Youth Conference. That’s reflected in the conference theme of Qaneryararput Yugtun Piniqerput, in Yup’ik, and Qaneryararput Cugtun Kayuq-erput, in Cup’ik. Roughly translated into English, it means language is our superpower.

Davidson spoke to the audience on the first full day of Elders & Youth, which is hosted by First Alaskans Institute. The conference at the Carlson Center in Fairbanks started Monday and ends Wednesday. Davidson has attended the conference since its inception and said she was happy to see how many people were in attendance this year.

“I was young and fresh at 15 and was then elected to be the first youth council president. And so, over 30 years ago, at the time there were only 52 youth participants and look at what we have today,” she said.

To the youth in the audience, she told a story about the importance of language. Davidson is a native Yup’ik speaker from Bethel.

“When our family moved away, I no longer was a fluent Yup’ik speaker,” she said. “But I practiced every chance I got.”

It can be intimidating to practice a language you don’t speak fluently and Davidson told learners in the audience to speak as much as they can, even when it’s hard.

She acknowledged that sometimes people get teased for saying a word wrong, but told learners not to give up. After all, good humor is a value and being teased is how you know you’re part of a community — how you’re welcomed home, she said.

“For those of you who are the proficient speakers, the experts, and our young people ... when those folks are practicing, show them love, show them kindness, encourage them to keep trying, to keep doing, to keep coming to you with questions about the nuances of our exquisite languages,” said Davidson.

With that, she led the audience in learning to correctly pronounce and say the theme in both Yup’ik and Cup’ik. She went through it slowly, syllable by syllable, and then said it at a normal pace.

The audience spoke loudly and clearly and worked their way through the sometimes unfamiliar words in order to learn. By the end, many in the audience were smiling and laughing and speaking with more confidence than when they’d started.

This is the second year Elders & Youth has had a conference theme in an indigenous language, said First Alaskans’ Karla Gatgyedm Hana’ax Booth (Ts’msyen), one of the event emcees.

Booth said she stopped in her tracks the first time she heard her grandmother speak her Native language.

“I didn’t understand what she was saying, but I knew it was special,” Booth said.

Fellow emcee Ayyu Qassataq (Iñupiaq) said three years ago she wasn’t able to introduce herself in her language. Now, she can do it with confidence.

“It was after the last time we were here in Fairbanks I realized if I’m ever going to get to a place where I could speak my language, I had to start somewhere,” Qassataq said.

Over the past few years, she pushed herself to speak it whenever she could, even when it was hard.

“Sometimes my cheeks would get hot and my throat would get tight because I (felt) like I wasn’t doing it right,” she said.

But she kept practicing and now, is proud to be able to introduce herself in Iñupiatun.

“When I introduce myself, when I say who I am, who I'm named for, who my family is and where we come from, not only does it connect me to my family and my community and our beautiful place in the world,” she said, it gives others an opportunity to open up a dialogue with her, especially at events like these.

People tell her they know her grandparents or her hometown and share stories. It’s a doorway, she said, to connect her with others.

“That really is a superpower,” Qassataq said. "If you’re like me and you are starting at a point where you don’t have your language yet or it’s starting to wake up within you, I want to encourage you. It’s so important and beautiful. Keep practicing. Keep saying it.”

In the end, she said, it’s in spaces like these, where Elders and youth can share their knowledge and experiences and languages, that the magic truly begins.