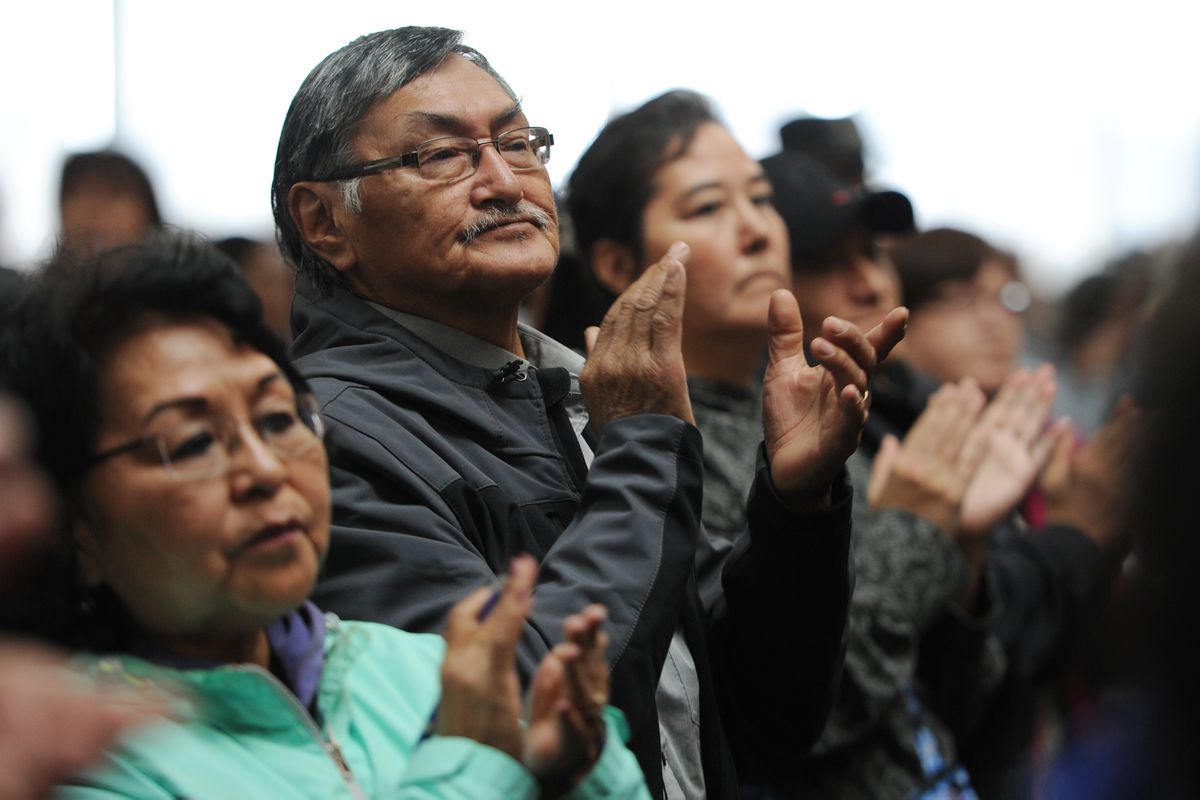 One of the nation’s biggest annual gatherings of indigenous people will convene next week in Fairbanks when the Alaska Federation of Natives convention starts Thursday, with a focus on improving government after a tumultuous year in Alaska politics.

The three-day event will cap a busy week of Alaska Native events.

The Elders and Youth Conference, uniting young and old to preserve traditions and tackle today’s problems, runs Sunday through Wednesday.

The meetings, held in Anchorage the last two years as they rotate between the cities, are expected to attract more than 5,000 Native people from across Alaska.

They should pump about $5 million into hotels, restaurants and stores, officials said.

An army of 300 Fairbanks volunteers will help with traffic, registration and providing free shuttle service between hotels and the Carlson Center where the gatherings will be held, said Helen Renfrew, with Explore Fairbanks, the convention and visitors bureau for the area.

Convention-goers will be met with welcome signs and greeters. An AFN kick-off potlatch open to the public will be held Wednesday evening. Moose soup, salmon dishes and fry bread will be on the menu at the Big Dipper Ice Arena.

“We are rolling out the red carpet,” Renfrew said. “When AFN and Elders and Youth come to Fairbanks, they are Fairbanks. Everything will be about (them) this week."

The gatherings are like big family reunions, bringing together old friends to tackle serious issues, with plenty of time for socializing and entertainment.

Julie Kitka, AFN president, said she’s looking forward to Fairbanks’ hospitality. “They always give AFN an extremely warm welcome, and our delegates love being there," she said.

The Grammy-winning and Alaska-grown band -- Portugal. The Man -- will be recognized at both events for calling attention to urgent indigenous concerns, including high rates of missing and murdered Native women.

Tragically, the recent murder of Kathleen Jo Henry, a Native woman from Eek, will be on many minds. An AFN panel Thursday afternoon will discuss violence against Native women and children shortly before the band is honored.

Early Monday, the youth keynote speakers will be Oliver and Wilson Hoogendorn, Native brothers from Nome and the first people to summit Denali this year. Early Tuesday, the elder keynote speaker will be Sally Swetzof, who has worked to preserve traditional language and culture on Atka in the Aleutian Islands.

The conference theme is “Language is our Superpower,” loosely translated from the Yup’ik words, “Qaneryararput Yugtun Piniqerput.”

In workshops, hundreds of young Alaska Natives will work beside elder mentors as they fillet and pickle salmon, prepare a moose head for eating, and make hide drums for dancing. In those and other events, they’ll learn skills to become community leaders in their villages.

“There’s nothing better than listening to our elders’ wisdom,” Medicine Crow said.

As for the marquee AFN convention, it began in 1966 when more than 400 Natives gathered in Anchorage to fight for ownership of lands they’d long occupied. It led to a federal settlement act in 1971 that made Native corporations the state’s largest private landowners.

Delegates still gather each October to chart the social and political course for AFN, the state’s largest Native organization. The convention today features a sprawling Native arts market and two nights of traditional dancing by a colorful array of village groups.

This year’s AFN theme, “Good Government, Alaskan Driven," is part of a two-year plan by the 38-member AFN board to focus on the need for “good government” at the tribal, state and federal level, with increased Native involvement, Kitka said.

In an unusual move this year, Kitka said the board already set next year’s convention theme, “Good Government, Alaskans Decide.”

“We’re looking at how to strengthen Alaska and see how we can really be a vibrant state where everyone is thriving,” Kitka said.

Attorney General William Barr, who declared a law enforcement emergency in rural Alaska during a visit to the state this summer, will deliver remarks live by video on Thursday, addressing a panel on public safety challenges in villages. Panelists will include Amanda Price, state Public Safety commissioner and Bryan Schroeder, U.S. attorney for Alaska.

Some of the panels will consider ways to improve state services, after AFN this year tangled with the governor over large cuts to programs as he sought to close a $1.6 billion budget deficit without reducing the Permanent Fund dividend or raising taxes.

[Alaska governor fires back at AFN over criticism of his budget]

Some AFN panel descriptions in the agenda raise questions about the governor’s performance.

“ ‘Good government’ refers to how well the state’s meeting the needs of Alaskans,” the agenda says. “In 2019, the Dunleavy administration tested the bounds of this principle."

A panel Friday morning on improving public education will include Jim Johnsen, University of Alaska president, and Sandra Kowalski, with the Alaska Board of Education. “Governor Dunleavy’s last budget calls the state’s commitment to educating Alaskan children ... into question," the agenda asserts.

Another panel early Friday featuring economists will discuss the need for “a sensible reduction of state government with new, sustainable revenues." In part, it will consider the future role of the $64 billion Alaska Permanent Fund, used this past year to pay for unprecedented levels of state services, atop its traditional role of paying annual dividend checks.

Kitka said the point of those panels is sending a clear message to convention-goers that Alaska, with the permanent fund and other savings, is not a poor state that must dramatically slash services.

“We are in a fiscal situation where we need to set the correct priorities for the state," Kitka said. “If we need to tighten our belt in some areas, we are perfectly willing to address some of those issues, but not from a position that we are poor state.”

Asked about the agenda’s comments, a spokesman for the governor said that as a former teacher in rural Alaska, Dunleavy is pleased to participate in AFN.

“He and the First Lady, an Alaska Native from the Northwest Arctic region, are well versed in the challenges facing Native communities throughout our state,” Jeff Turner said in an email. “The governor looks forward to sharing his experience, knowledge and perspective with the delegates and other attendees in Fairbanks.”

Kitka said another important panel will focus on strengthening ties between Alaska Native organizations and the military in Alaska. Military leaders such as Lt. Gen. Thomas Bussiere, commander of the Alaskan North American Aerospace Defense Command Region, will discuss military efforts in the state.

“There is an unprecedented military buildup in our state,” Kitka said. “As people who are the largest private landowners in Alaska, we need to align ourselves with some of the things they are doing.”