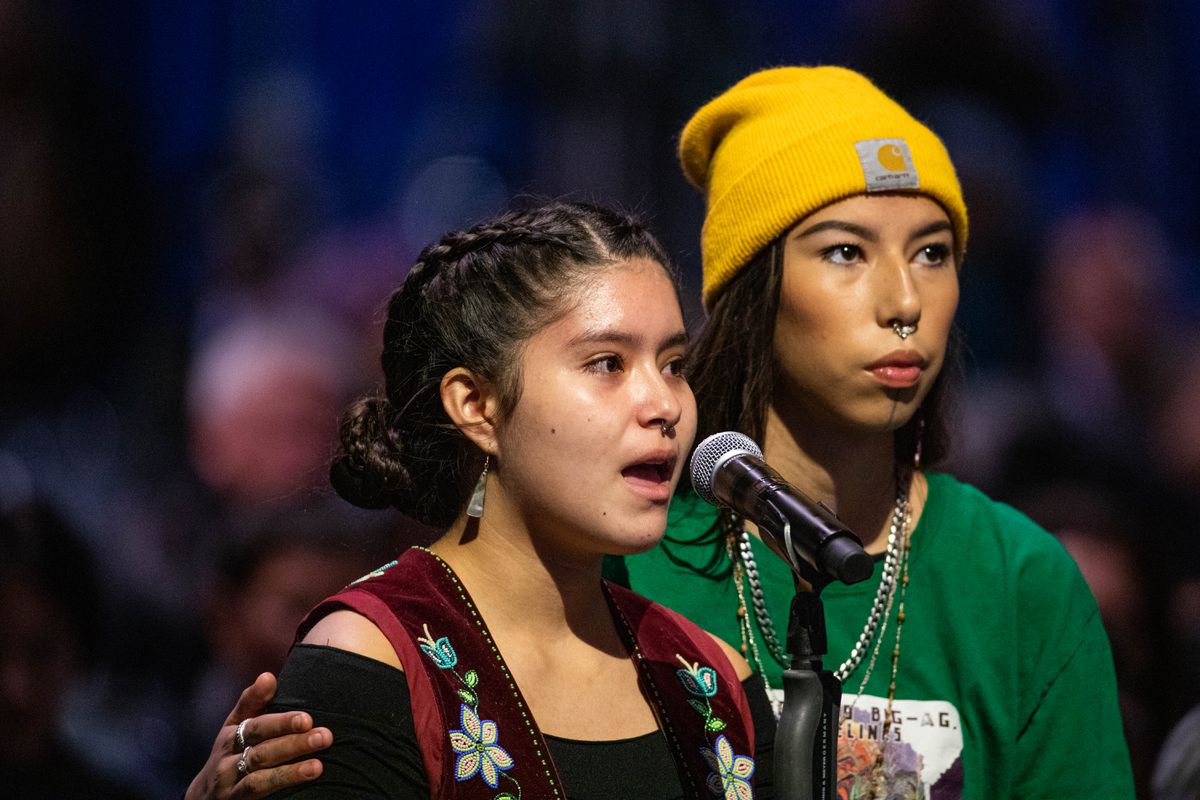 Nanieezh Peter, 15, and Quannah Chasing Horse Potts, 17, speak in support of a resolution reinstating a climate action leadership task force and declaring a state of emergency on climate change, on Saturday, Oct. 19, 2019 during the Alaska Federation of Natives convention at the Carlson Center in Fairbanks. (Loren Holmes / ADN)

Nanieezh Peter, 15, and Quannah Chasing Horse Potts, 17, speak in support of a resolution reinstating a climate action leadership task force and declaring a state of emergency on climate change, on Saturday, Oct. 19, 2019 during the Alaska Federation of Natives convention at the Carlson Center in Fairbanks. (Loren Holmes / ADN)

FAIRBANKS — An emotional dispute over climate change and resource development divided the Alaska Federation convention floor for an hour on Saturday, but in the end, AFN approved a resolution that declared a climate change emergency.

The disagreement highlighted generational differences, as mostly young people concerned about thawing permafrost and eroding villages faced off against older counterparts fearful of losing access to oil and mineral resources, and even the whales and seals they hunt.

Nanieezh Peter, 15, and junior Quannah Chasing Horse Potts, 17, argued passionately for the nonbinding measure, which calls on AFN to reinstate a task force that would advocate for strong climate policies, develop indigenous voices and declare a state of emergency on climate change.

They spoke about dangerous and unsafe traveling conditions on ice that’s no longer solid, and of deaths and disease of seals, salmon, migratory birds and other animals. The resolution was part of a batch of measures approved at the Elders and Youth Conference, a pre-cursor event to AFN.

“I’m worried for our generation,” said Potts, speaking to the AFN crowd. “We are crying up here, we should not have to come to you worrying about future generations.”

They opposed an effort by Crawford Patkotak, chair of the Native corporation for an oil-rich region, Arctic Slope Regional Corp., to add a line to the resolution designed to protect resource extraction on Native land.

He argued that federal regulations aimed at controlling climate change could lead to restrictions against economic development that are critical to Alaska and Native corporations. They could limit people’s ability to hunt whales, seals and other animals as conservation groups calls for hunting restrictions.

Peter argued the proposed addition was unacceptable, since it would help protect the oil and coal that contributes to global warming.

Victor Joseph, chair of the Tanana Chiefs Conference representing Interior tribes, drew a standing ovation when he argued in favor of the youth, leading to passage of their measure without the addition.

“We should not be scared of that! We’re stewards of the land!" Joseph said.

A non-Native man who long ago organized an important traditional dance festival, and who helped launch a Native mask exhibit and a youth job program, received one AFN’s top honors on Saturday.

The AFN on Saturday gave Tim Troll its Denali Award, for his years of work supporting Alaska Natives.

Troll is executive director of the Bristol Bay Heritage Land Trust, a group he helped create that works to protect fish and wildlife habitat in the Southwest Alaska region.

Troll moved to Alaska in 1978, working as a VISTA volunteer attorney in Bethel in Southwest Alaska, and later took city positions in rural villages.

As city manager of St. Mary’s in 1982, Troll organized the first Yup’ik Dance Festival, a dance event in the Southwest region, AFN said.

In 1996, he helped organize a nationally acclaimed exhibit of Yup’ik masks that traveled to the Smithsonian.

Later, Troll moved to the Bristol Bay region. His “most exemplary leadership” there was helping create the Bristol Bay River Academy that gives Native youth summer jobs and a career path to keep them in their villages, AFN said.

The Alaska Native leader who successfully fought to give Vietnam-era Native veterans another shot to apply for a prized land allotment used his platform at AFN Saturday to urge the federal government to provide resources to properly implement the program.

Nelson Angapak called on Sens. Lisa Murkowski and Dan Sullivan, R-Alaska, to ensure there is adequate funding for the Bureau of Land Management and the Bureau of Indian Affairs to properly support the new allotment program.

Angapak wore a camouflage-pattered kuspuk, made by his wife using cloth from uniforms from veterans of the War in Afghanistan in 2001, a gift from a former military leader, said Julie Kitka, AFN president.

Congress in March passed a major lands bill that opens the door for Native veterans who served in the military from Aug. 5, 1964 to the end of 1971 to apply for tracts of land of up to 160 acres. Their heirs can also apply.

It follows a more limited application period in 1998, an opportunity that many veterans said wasn’t enough.

The application period this time will be five years. The BLM must finalize the rules and begin accepting applications by September 2020.

“We must insist that (Department of Interior) will provide consultation (with Natives) and receive input from us to make sure the intents of this law will be carried out,” Angapak said.

“The challenge we’re faced with is implementation, we must be involved,” he said.

A group of state lawmakers, including Rep. Josh Revak, R-Anchorage, presented Angapak on Saturday with a framed legislative citation honoring his efforts.

“I’m honored to call Nelson my friend and my brother in arms,” said Revak, an Iraq war veteran. “I have watched him work tirelessly ... for decades, testifying to every Congress since the ’90s, and his work finally paid off."

AFN was well behind schedule when it finally reached one of the most special moments of the convention late Saturday, giving awards to Alaska Natives for upstanding actions and lives. They are:

Parents of the Year

Ulric and Mary Ulroan, public school teachers in the Southwest village of Chevak, were honored as AFN’s Parents of the Year.

With their kids, they once picked 95 gallons of salmon berries to share with elders and families in their community.

The couple have instilled in their six children and three grandchildren traditional ways, such as living off the land, AFN said. They take a 10-hour boat ride up the Yukon River each summer to catch, cut and smoke salmon.

They also push their children to study hard, like they did. In 2000, with three children in tow, they began attending the University of Alaska Fairbanks together. They graduated in 2006.

“Just do it,” is Ulric’s advice to young people -- take the first step though it’s the hardest.

Mary tells students “get things over and done with" -- accomplish what you set out to do.

Dorcus Rock is a traditional healer, a wife, and mother to nine.

Those duties haven’t stopped her from helping her community in Point Hope.

After studying education at the University of Alaska Fairbanks, she returned to her community to serve as an Iñupiat language teacher. She also served many years on the board of the Tikigak Corp., the village corporation.

The Healing Hands award goes to a tribal healer or health care provider.

Gary Harrison, chief of the tribal government in Chickaloon, has fought decades to improve life for Alaska Natives, by improving access to health services and promoting community and economic development projects, AFN said.

After joining the council in 1984, he is its longest serving member. He laid the groundwork for the group’s development, and made it a model for indigenous communities worldwide, the group said.

Benjamin Young of Hydaburg in Southeast Alaska taught his first language class when he was just a teenager, at Sealaska Heritage Institute’s Latseen Leadership Academy.

He learned Xaad Kíl, the Haida language, from his grandfather, Claude Morrison Kúng Skíis, a respected elder who lived to 100.

Young graduated from Butler University with a degree in secondary education and began teaching in 2014.

At last year’s convention in Anchorage, she displayed her creation, a six-foot-tall qaspeq, the traditional hooded overshirt also called a kuspuk. Usually decorated with floral patterns, this one featured the faces of 47 missing and murdered Alaska Native women.

With a grant from the Rasmuson Foundation, she’s now working on 12-foot-high version that will feature over 200 Alaskan, Canadian, and Native American portraits or murdered and missing indigenous women.

“Amber creates apparel that celebrates the Yup’ik language and subsistence activities, and is a strong advocate for social justice and water protection,” AFN said.

The “Warriors of Light” award is named for the late Dr. Soboleff, and recognizes individuals who uplift Native people or enrich their lives.

When Caitlynn Hanna graduated from South High School with a GPA over 3.0 not long ago, she made a statement with her clothing.

To highlight her roots, she wore the mukluk boots used by her ancestors, and an atikluk, the Inupiat word for the qaspeq, or kuspuk.

A counselor at the high school asked Hanna to design a logo, now worn on school shirts.

Now she’s a civil engineering student at the University of Alaska Fairbanks, and worked last summer at Teck Alaska at the Red Dog Mine, gaining experience in engineering.

Elder of the Year

She lost her father at age 4, and attended school only twice, after her mother needed her help at camp, AFN said.

She still harvests subsistence food, after she and her family moved to the village of Kobuk in 1955 to build a cabin.

“They were unable to finish it, her brother and uncle built a place to live under a fish rack,” AFN said. “They collected logs, peeled bark off trees held by rocks and wood. The walls were branches and leaves. They had no light, kerosene, coffee, sugar, or tea. Her sister sewed isiktuuqs (caribou mukluks) by the light of the wood stove. The family had only fish and berries."

“Nina said it was a hard life, but they had everything they needed, especially each other,” AFN said.