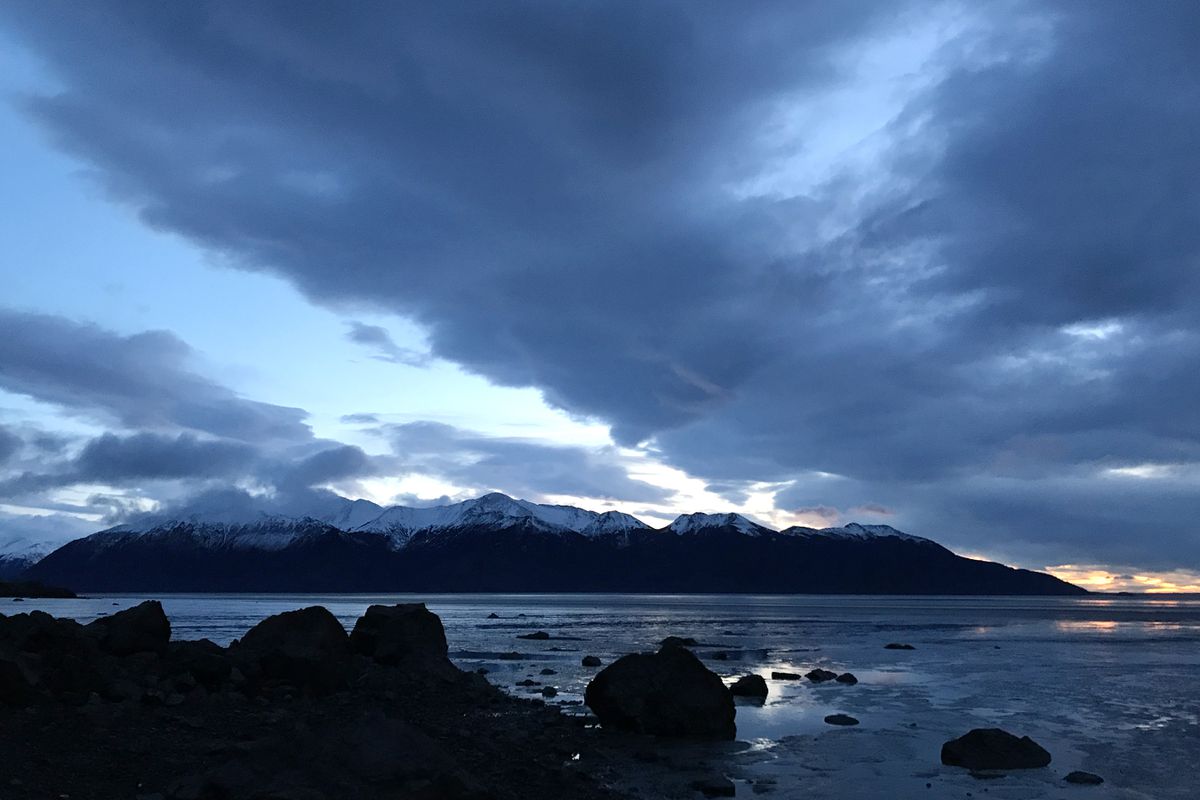 Darkness begins to settle in along Turnagain Arm after sunset on Monday afternoon, Dec. 16, 2019, less than a week from winter solstice. (Bill Roth / ADN)

Darkness begins to settle in along Turnagain Arm after sunset on Monday afternoon, Dec. 16, 2019, less than a week from winter solstice. (Bill Roth / ADN)

Jennifer Thorsteinson of Juneau said she has been diagnosed with mild depression but felt like it got worse this November.

The lack of snow this season made matters worse, said Thorsteinson, 37. The Juneau days are not only short but also lack the usual brightness that accompanies fresh snowfall.

“It’s just monotone,” she said. “It feels like we’re in a grayscale movie.”

In sunny and equatorial places, only about 1% of the population experiences what’s called seasonal affective disorder, a type of depression. In populations living in far northern parts of the world like Alaska, that number is closer to 10%, according to Lisa Lindquist, chair of psychiatry at Providence Alaska Medical Center.

Symptoms of seasonal affective disorder and the less severe “winter blues” start in late fall or early winter and resolve when the sun comes back in spring, according to Lindquist. In rare cases, some people might experience SAD during the summer.

[The darkest days of winter are here. Happy lights might help.]

SAD can make tasks once easy amid long summer days feel difficult. Lindquist said it’s common for people with SAD to be haunted by lethargy, cravings, lack of sleep and dark thoughts throughout winter.

But the condition is treatable, according to Lindquist, with a mix of therapy, medication and the use of what have been dubbed “happy lights” or “SAD lamps.”

[Hello darkness, my old friend. I will play outside to survive you.]

SAD tends to affect women more than men, Lindquist said, at a ratio of four to one, according to some studies. Symptoms can include a depressed mood that persists for most days of the week and a lack of interest in things the affected person once enjoyed. It can make concentrating difficult and lead to all-around sluggishness.

The condition can also disrupt sleep. People who show SAD symptoms might get too much sleep or too little, Lindquist said. Changes in appetite are also part of SAD, she said.

“And then some people even feel fairly hopeless, like things aren’t going to get better for them,” Lindquist said. “And some people also experience thoughts of suicide.”

If these thoughts are present, Lindquist said talking with a health care provider is critical.

[Chemistry, not laziness, is why your couch beckons to you during the dark days of December]

There are multiple theories about SAD’s suspected causes, according to James McLaughlin, a grant program manager at the Alaska Department of Health and Social Services, but they mainly have to do with the lack of sunlight, he said.

Without the sun, circadian rhythms, which regulate your internal clock, can be affected, McLaughlin said.

In terms of vitamin deficiency as a potential cause, it’s still unknown how vitamin D and SAD are connected, McLaughlin said.

"But the reality is that people in Alaska, by and large, are vitamin D deficient,” he said.

SAD first appeared in medical journals during the 1980s, after researcher and current psychiatry professor at Georgetown Medical School Norman E. Rosenthal and his colleagues studied the condition in Maryland. They discovered that cases tended to appear in areas with rainy and dark winters, and that light therapy could be helpful in treating people who showed symptoms of SAD.

“Winter blues” are the less severe feelings people might have during the dark months. One study noted that between 10 and 20% of Alaskans experience those feelings in the darker months, McLaughlin said.

Light therapy can be helpful in those cases as well. Lindquist stressed that the winter blues might be mild, but if someone is feeling low or hopeless, they should seek out their doctor.

In all areas, Lindquist said eating healthy and getting exercise are key.

“I understand it’s very hard sometimes when you’re not feeling well to try to be more engaged,” Lindquist said. “But actually, being social, exercising, eating well, those things can all be really helpful for mood.”

[Finding light in the darkness]

Thornstein said the activities she usually enjoys during the colder months, like sledding with her nine-year-old son and going ice skating, aren’t possible with the recent weather in Juneau. The drab forecast lacks the holiday cheer and active fun of years past, she said.

She talked with her doctor when her SAD symptoms grew worse. The doctor recommended taking a vitamin D supplement and buying a light therapy lamp to help with her symptoms. She’s also trying to get regular exercise and take walks when the sun is out. She said she hasn’t felt a marked change and still has difficult days.