Finding light in the darkness 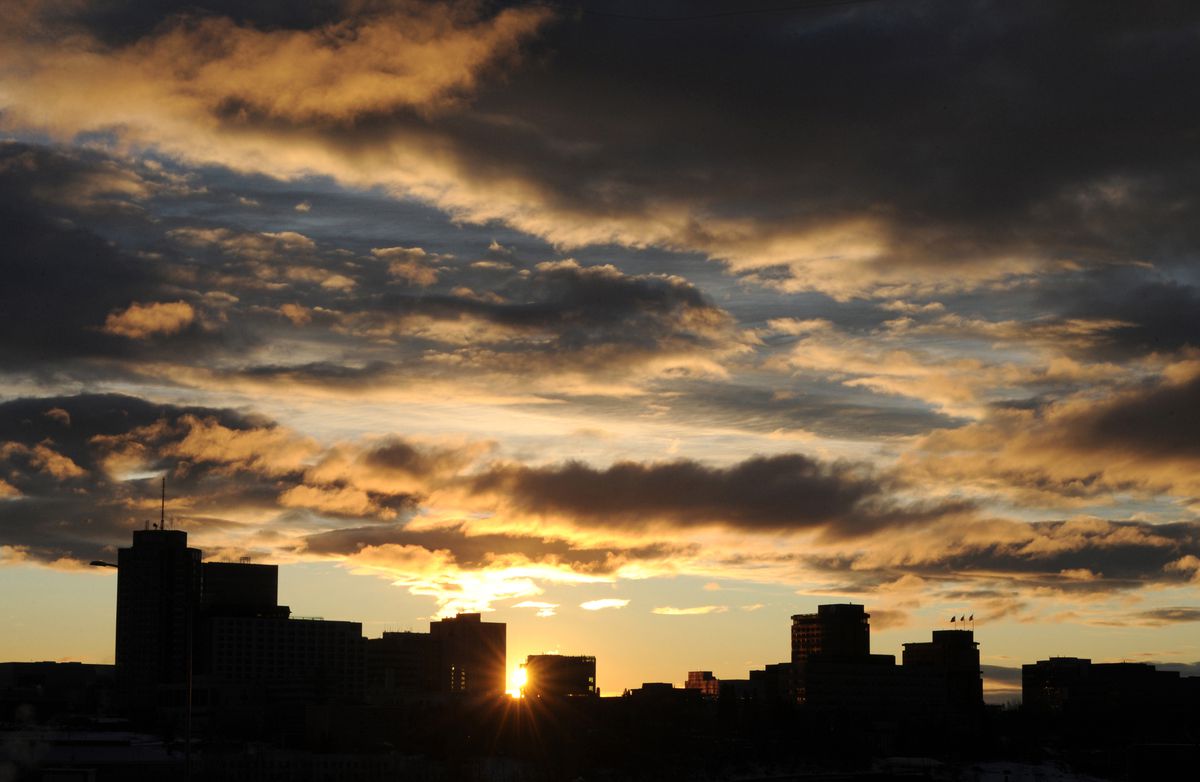 Showing up in ones and twos to the church where we rehearse, members of the Anchorage Concert Chorus are momentarily illuminated by headlights as others pull in. It’s now mid-December, and the sun has been down for nearly three hours by the time our Monday night begins. Except for 23 minutes of the first session with our holiday concert music, it’s been dark outside for all of our rehearsals since mid-October. The 150 chorus members filling the chairs inside aren’t exactly huddled around a shared fire, but sometimes it can feel that way.

Though the mid-afternoon sunsets have often been beautiful, it’s been a hard, dark winter so far. Each time there’s been new snow, we fool ourselves into thinking maybe this will be the time it sticks for good. Then the rain comes again, and our rendition of “White Christmas” takes on a more desperate tone.

Events outside our rehearsals have a way of sneaking in, too. Chorus director Grant Cochran’s day job is as an associate professor in the University of Alaska Anchorage music department; he spent the summer watching the state budget process in horror, contemplating UAA’s share of a massive $135 million funding cut. The blow to the university was softened in August, when Gov. Mike Dunleavy signed an agreement with the university’s Board of Regents to reduce the cut to $70 million and spread it over three years — still a major hit, but not one that would eliminate the entire music department. At least not this year.

Always present in the background, too, are the signs of our increasingly tattered republic. For years, our ability to talk to and empathize with those on the other side of the political fence has been diminishing, coarsening, growing ever more strained. Instead of trying to build bridges ourselves or elect representatives who do, we’ve convinced ourselves that those we don’t agree with are misguided, stupid, malicious or some combination of the three. And we elect leaders who believe that, too. Each day, the bar seems to get lower.

But once a week, we all shuffle in to the church sanctuary and sing Christmas music for three hours. Whoever we are on the outside of that room — Republicans, Democrats, nonpartisans, doctors, lawyers, social workers, teachers, soldiers, businesswomen — inside, we’re only sopranos, altos, tenors and basses. And it’s surprising, coming back to that music every year amid the ice and dark. Even though it sometimes feels like everything outside is going wrong, the well-worn music we’ve all heard hundreds of times before has somehow lost none of its optimism and brightness in the year since we last rehearsed it.

One time, I read something that stuck with me — an assertion that all of the light and warmth and love we can find in the world exists solely because of the hard work of ourselves and other people, and that without that conscious effort, we would be lost. Whether or not you agree with the premise that we’re the only sources of those things that make life worth living — at the very least, I would include dogs and other animals as our compatriots in that effort — there is a grain of essential truth in it. This can be a cold, dark world if we let it be that way, and making it a brighter one takes work — lots of it.

And that’s what brings us back each year, I think, to sing the music of our darkest season. In its utter lack of cynicism, holiday music reminds us that we can be good, that the world can be a better place, even if the intervening year has done its best to make us forget that. All that better world requires is that we give it more light, warmth and love.

When our performance begins at the Performing Arts Center on Sunday, we’ll still be singing in the dark. The sun will have been down for 18 minutes by the time the curtain goes up, even without any allowance for the audience tendency toward “Alaska time."

But we’ll have two whole seconds more light that day than the one before. And we’ll get 15 more seconds the next.

The light is coming back. All we have to do is work for it.

Tom Hewitt is the opinion editor for the Anchorage Daily News.