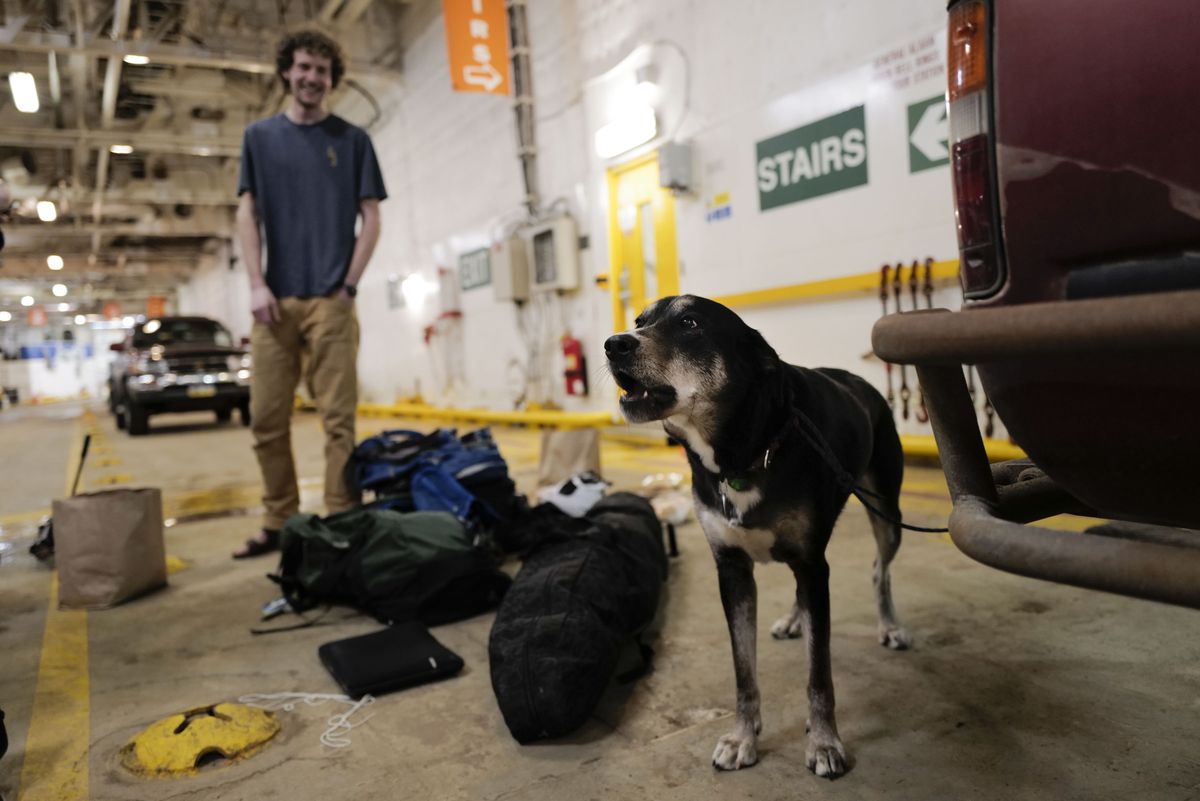 Keegan Krantz, with his pet dog Nootka, works on repacking his truck aboard the Alaska Marine Highway's Matanuska as it is tied up at the Auke Bay Terminal in Juneau with engine problems on Friday. (Michael Penn)

Keegan Krantz, with his pet dog Nootka, works on repacking his truck aboard the Alaska Marine Highway's Matanuska as it is tied up at the Auke Bay Terminal in Juneau with engine problems on Friday. (Michael Penn)

JUNEAU — On the 10th day of a three-day ferry trip, Nootka the dog was restless. He tugged on his lead, barked and eagerly licked the hands of a stranger.

His owner, Keegan Krantz, was restless too. For more than a week, Nootka and Krantz have been living aboard the Alaska Marine Highway System ferry Matanuska, which has been tied up in Juneau since Sunday because of a mechanical failure.

According to state officials, the 21 passengers remaining aboard the ship will have to wait at least a week more before the problem is fixed. A planned three-day trip will turn into something closer to three weeks.

Their experience has exposed something else: Alaska no longer has any functioning mainline ferries.

Among the state’s fleet of 11 ships, only the small Lituya, dedicated to short runs between Ketchikan and Metlakatla, is still operating. All the others have either been laid up for lack of operating funds, lack of maintenance funds or because of prior planned work.

Until this year, the Alaska Marine Highway could shift stranded passengers onto other ships. Budget cuts last year reduced the ferry system’s schedule so much that in this stretch of winter, “there’s only one boat, and that’s us,” said the Matanuska’s chief engineer, Eric Downer.

The recent breakdown was caused by a problem in a new piece of equipment installed when the Matanuska’s engines were replaced during a two-year shipyard stay that ended just before Thanksgiving.

The component is under warranty, and Downer said technicians from the manufacturer arrived this week.

Spare parts are on their way as well. Downer said they’ll arrive by air.

When the Matanuska partially broke down north of Ketchikan last week and limped into Juneau on one engine, Krantz was moving from Prince of Wales Island to Palmer with his pickup, his dog and his possessions.

[Your support makes stories like this possible. Buy a digital subscription to adn.com for as little as $2.99 a month]

While living in one of the ferry’s staterooms, he debated whether to leave his truck behind.

“It’s been really frustrating,” he said.

Ferry officials have offered refunds, free accommodations and free meals, and all of the stranded passengers commended the service, if not the situation.

By Friday, Krantz had decided to use part of his refund to fly to Palmer with his dog and some of his bags, then return once his car reaches Haines. Other passengers said they had done or were doing the same. Many boarded a boat chartered by the Marine Highway System.

That vessel carried 99 passengers north to Haines and Skagway, said Sam Dapcevich, a spokesman for the ferry service.

Others have remained onboard, either by choice or because they have no other options. Many are members of the military who have been reassigned to bases in Fairbanks or Anchorage. Their refunds will go to the federal government, meaning they may not have the cash for another travel option.

Each declined to be interviewed by name, saying they couldn’t speak publicly without going through a public affairs officer.

Individually, they said individual crewmen have “gone above and beyond what our expectations were.”

Dogs are normally confined to ferries’ car decks, but with the prolonged stay in Juneau, the Matanuska’s crew created an impromptu kennel in the space formerly occupied by the ship’s bar. (The ferry system’s bars were closed in 2015 by budget cuts.)

Passengers with cars have been allowed to take them freely on and off the ship, enabling them to shop, use the laundromat or simply sightsee.

Those who rely on the ferry system for regular transportation were less complimentary.

While communities elsewhere in Alaska have coped without ferry service, coastal residents say they have built their lives and towns around the certainty the ferries provided. Now, the ferries are promising certainty and delivering uncertainty.

Adrianne Milos of Haines used to work as a bartender for the ferry system but found herself among the passengers stuck onboard the Matanuska. On Friday, she was the last passenger to drop her car off at the terminal of Alaska Marine Lines, which operates a barge service in Southeast Alaska.

Sending one passenger and a 2004 Subaru Outback from Juneau to Haines with one month’s notice costs $198 aboard a ferry, according to the Marine Highway System’s online reservation service.

She was preparing to board a flight to Haines on Saturday, assuming good weather.

“The state’s going to have to do something,” she said of the ferry system. “They can’t just say, ‘We can’t afford it.’ ”