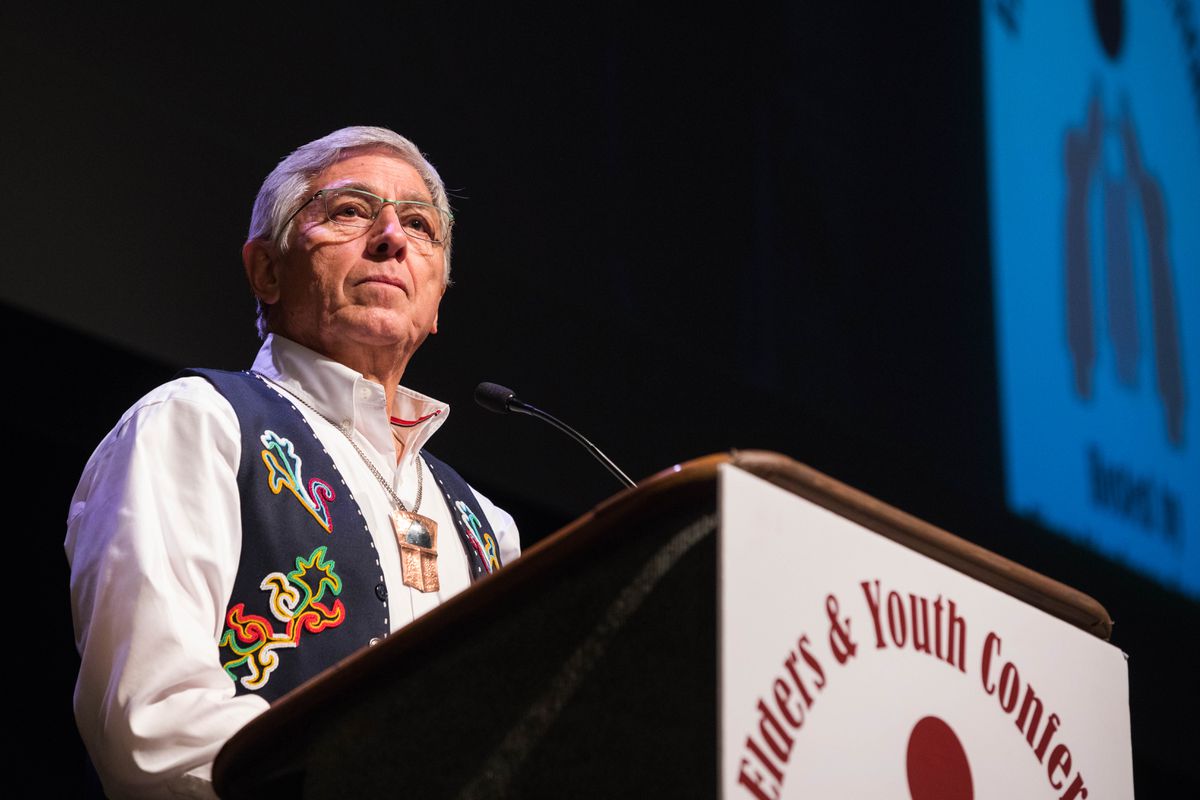 Mallott was known as known as Dux̱ da neiḵ, K’oo del ta’ in Tlingit, or “a person who would lead us into the future.”

According to a friend, Mallott suffered a heart attack Thursday night and was flown to Anchorage for treatment. The friend, Richard Petersen, president of the Central Council Tlingit and Haida Indian Tribes of Alaska, said he learned of Mallott’s death Friday morning.

Mallott’s family did not return phone calls on Friday.

Peterson said he considered Mallott a close friend and said he’s still in shock about the news.

“I will miss him greatly,” said former Gov. Bill Walker, who with Mallott created the winning “unity ticket” during Alaska’s 2014 gubernatorial election. Mallott served for most of a term before resigning amid unclear circumstances just before the 2018 election. Details of what led to his resignation have never been made public, but were described at the time as involving inappropriate comments and overtures to a woman.

“He was an incredible, life-changing experience for me,” Walker said.

Today I lost a dear friend, Byron Mallott, whose love for Alaska and Alaskans knew no bounds. We started out as rivals and soon became close friends. I will miss him greatly. To Toni Mallott and family, our hearts are breaking with yours. Farewell, dear friend, farewell. pic.twitter.com/9NLUdNjYbs

Gov. Mike Dunleavy has ordered state flags to be flown at half-staff for one week to honor Mallott, who was a prominent figure in Native politics, statewide politics, and Alaska business for almost 60 years.

Mallott “fought for what he believed in, and he has a long record of service in Alaska, across business, politics and a whole host of other endeavors as well,” Dunleavy said.

Petersen, who was a small-town Southeast Alaska mayor like Mallott, called him an “icon” for the Tlingit people. Mallott was clan leader of the Kwaashk’i Kwáan of the raven/humpback salmon people in Yakutat and kept his cultural heritage close throughout his life. Alaska’s second lieutenant governor with Native heritage, Mallott attended his inaugural ceremony in traditional regalia.

Peterson said the ending of Mallott’s political career should not overshadow his work.

“I think the work that he did outweighed any of the mistakes he may have made, and I hope people will remember him for just the tireless work he put in serving his people, the greater community of Alaska. He believed in our state and wanted the best for our state, and he did his best to see that happen,” Peterson said.

He said Mallott could come across as stern in public, but in private, he allowed his sense of humor to emerge. Peterson said that on his desk he keeps a series of silly photos — taken in a photo booth — of himself and Mallott.

Claire Richardson, who served as Mallott’s chief of staff during his term as lieutenant governor, said he “had the uncanny ability to speak eloquently and passionately without the use of notes or cue cards. He told me that he developed a stutter while attending boarding school as a child. So he learned to think of what he was going to say ahead of time, as if there was a teleprompter in his head. It was hard to explain to reporters asking for an advance copy of a speech he was scheduled to make that there wasn’t one available. We would be transcribing his remarks as fast as we could to get the transcripts out the door.”

Mallott, born in Yakutat, was married to Toni Mallott and had five children, 10 grandchildren and two great-grandchildren.

Born during World War II, Mallott was elected mayor of Yakutat in 1965 at age 22, according to a University of Alaska biography, and unsuccessfully ran for the Alaska Legislature in 1968, losing by 23 votes. He was named to the staff of U.S. Sen Mike Gravel, serving as the senator’s top aide on the Alaska Native Claims Settlement Act, then became director of the Rural Alaska Community Action Program, today known as RurAL CAP.

He served as a director, chairman, and president and chief executive officer of Sealaska Corp., the regional Native corporation for Southeast Alaska, while also working for the village corporation of Yakutat. In 1976, he was named president of the Alaska Federation of Natives.

“We are shocked to hear about the sudden death of Byron Mallott. Our deepest condolences go to his wife Toni, his grown children and many grandkids. His family made many sacrifices to allow Byron to contribute to building up the state and Native institutions for many decades. His contributions are numerous and lasting," she said.

Foreshadowing his later life, Mallott said he considered running for lieutenant governor in 1978 as an independent alongside Jay Hammond, a Republican who was considering a gubernatorial bid as an independent.

“I thought that was a rather attractive possibility,” Mallott told the Daily News in 1978.

Hammond subsequently appointed Mallott to a commission planning to move the state Capitol from Juneau. Mallott served, then resigned, saying at the time that the capital move was “fiscally irresponsible and public policy insanity.”

Hammond then named Mallott to the board redrawing the state’s political boundaries after the 1980 census and in 1982 picked him for a slot on the Alaska Permanent Fund Corp. board of trustees, replacing Elmer Rasmuson.

Mallott became chairman of the Alaska Permanent Fund Corp. board in 1985 and served until 1991, when he was removed by Gov. Wally Hickel.

Mallott was elected mayor of Alaska’s capital city in 1994 but resigned the following year when he was hired as executive director of the Permanent Fund Corp.

While working as the corporation’s director, a job he held until 1999, he was a director of the Seattle branch of the Federal Reserve Bank of San Francisco for six years and served on the San Francisco bank’s board.

He subsequently became president of the First Alaskans Foundation, a Native advocacy organization. In 2003, while on a trip to New Zealand, suffered a blood clot in his brain but recovered after emergency surgery. In 2010, he was co-chair of the successful write-in campaign for U.S. Sen. Lisa Murkowski’s re-election bid.

In 2013, he decided to run for governor as a Democrat out of a sense of public duty, he said at the time. He resigned from Sealaska’s board of directors for the campaign.

“I was born and raised in this state, in a village,” he said shortly after he announced. “I have held many positions both in public service and government, business, and the nonprofit sector over the years, and I’ve just come to sense after all of that service that maybe there is something I can give back in a way that moves Alaska down the road in a positive way."

“We’re going to help Alaskans understand that it’s OK to work together. It’s OK to both be pulling on the same end of the rope,” Walker said after their election.