Seward, ‘at the precipice’ of a major COVID-19 outbreak, cancels Fourth of July celebration 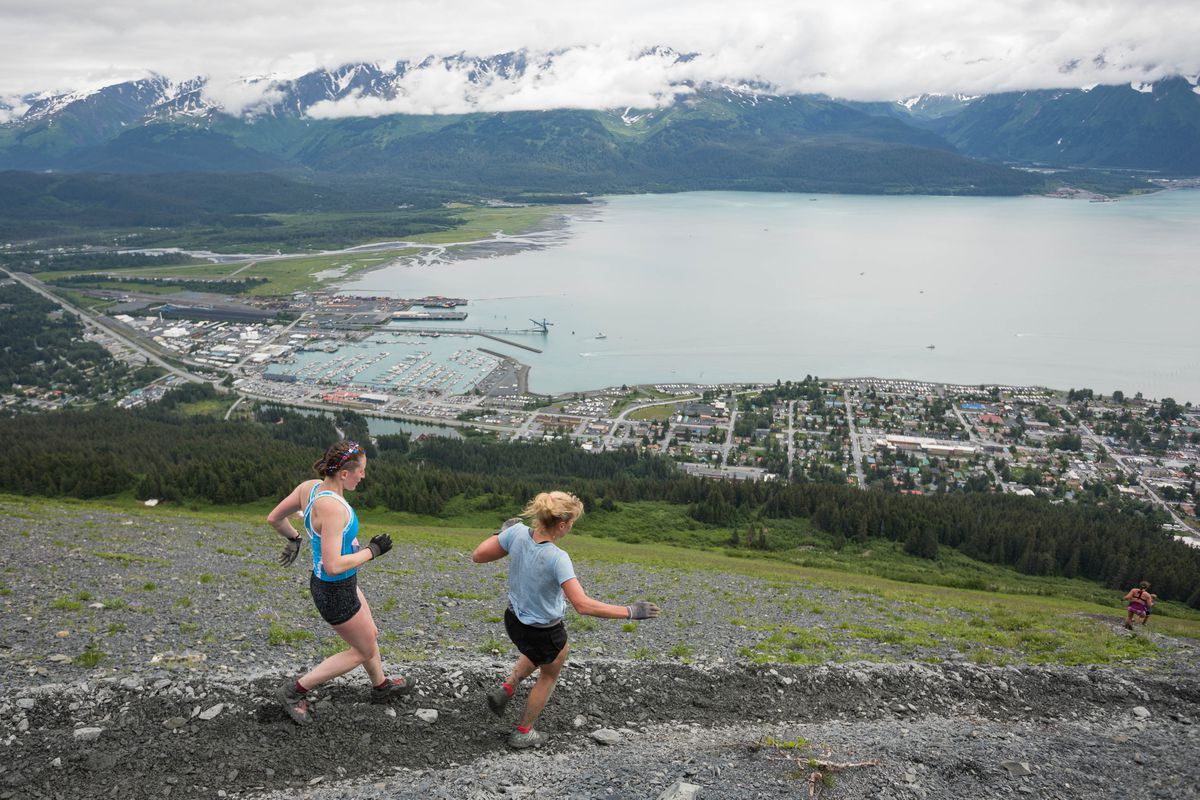 Competitors in the women's race run down the mountain during the Mount Marathon race in Seward, July 4, 2017. Seward and Resurrection Bay are in the background. (Loren Holmes / ADN)

Competitors in the women's race run down the mountain during the Mount Marathon race in Seward, July 4, 2017. Seward and Resurrection Bay are in the background. (Loren Holmes / ADN)

Amid spiking coronavirus cases in the scenic city on Resurrection Bay, Seward chamber of commerce officials on Monday canceled Fourth of July events this coming weekend.

The cancellation includes fireworks and vendors in addition to the already canceled Mount Marathon Race and parade. The events annually draw thousands of visitors from a wide part of the state, tripling Seward’s 2,750 year-round population.

As of Monday evening, a total of 24 Seward residents had tested positive for COVID-19, most of them in the past few days.

The state on Monday reported eight new cases that were confirmed on Sunday, according to the Alaska Department of Health and Social Services COVID-19 dashboard. Two new cases were reported in nonresidents. The new cases Monday will appear in state data on Tuesday.

The new cases were among 25 new ones reported around the state as Alaska’s level of COVID-19 infections continues to rise, hitting another new high Monday with nearly 500 active cases around the state. The state reported no new deaths or hospitalizations, however, and hospital statistics indicate health-care capacity remains stable.

Two staff members at the nonprofit mental health agency SeaView Community Services are among the Seward positive cases, according to a statement SeaView issued Monday afternoon. The staffers are in quarantine and won’t come back to work until released to do so, based on directives from state public health officials and SeaView policy.

The city last week advised anyone who had visited the Seward Alehouse and Yukon Bar earlier in the week they should be tested for the virus. A Seward Alehouse employee tested positive for COVID-19 and the restaurant posted it would close for cleaning and to monitor employee health. Hundreds of tests were performed over the weekend.

Many restaurants and bars downtown were closed Monday and numerous people were waiting to get tested, according to Kat Sorensen, a chamber spokeswoman.

Sorensen said she hoped no one was planning any kind of alternative activities to make up for the loss of the annual festivities.

“We are at the precipice of our COVID outbreak,” she said Monday.

The Seward Chamber of Commerce had originally hoped to proceed with the holiday events using mitigation measures such as social distancing, face coverings handed out to participants, hand sanitizer stations and street closures to give people more room to spread out.

But the chamber, in collaboration with the city of Seward, state and local health care providers, and the chamber board and members decided instead to cancel given the recent and dramatic increase in COVID-19 cases there, according to a statement issued Monday.

“We’re seeing cases across businesses and in different sectors,” Sorensen said. “At this point, if our downtown is closed due to coronavirus concerns, there’s no reason we should be inviting visitors to our town.”

Several entities in town said they were awaiting word of additional city restrictions based on the rising numbers of cases. As of late Monday, none had been announced.

Officials at the Alaska Sealife Center in Seward said they were operating as usual, albeit with about a quarter of the usual visitors during the peak summer season because of the pandemic. Along with the marine residents on display, the center is looking after six stranded harbor seal pups and an adult otter found with a zip tie binding his paw.

A number of center employees got COVID-19 tested, according to Tara Riemer, center president and CEO. The results aren’t in yet.

“We are keeping in touch with lots of staff,” Riemer said.

At SeaView, the state is working with the agency to identify staff, clients or vendors who may have come into close contact with the infected staffers. Starting Monday, SeaView started delivering outpatient services via tele-health platforms, the agency said. “(E)ssential behavioral health services will remain available to the community without interruption and staff will be working with clients to help them connect to their providers through Zoom or telephone.”

The agency will continue to operate residential programs, SeaView said, but staff will be isolated to the facility they serve and screened daily, among other state protocols.

SeaView will continue to accept new clients and anyone in need of services will be able to access a provider through tele-health platforms, officials there say. To access services, call 907-224-5257. For people experiencing a behavioral health crisis, a Master’s Level Clinician is available at 907-224-3027.

Statewide, another 21 residents and four nonresidents tested positive for the coronavirus on Sunday, according to the Alaska Department of Health and Social Services COVID-19 dashboard.

Along with the Seward cases, there were six new cases reported in Anchorage, two in Willow, and one each in Eagle River, Fairbanks, North Pole, Wasilla and a community in the Nome area, according to state data. The two remaining nonresident cases were located in unspecified travelers in Anchorage and Mat-Su.

The new cases bring the state’s number of infected people not considered recovered -- the active-case count -- to nearly 500: 365 residents and 133 nonresidents. It’s not clear how many of those people are showing symptoms or if so, how sick they are.

There have been a total of 1,087 cases confirmed in Alaska since the pandemic began in March, 904 in residents and another 183 in nonresidents, many in the seafood industry where testing is required. State travel mandates involving testing have also increased the number of people getting tested for the virus.

The number of people hospitalized with COVID-19 didn’t change between Sunday and Monday.

As of Monday, 67 Alaskans had been hospitalized with coronavirus since March. Fourteen Alaskans have died with the virus, including four out of state.

There was a 1.27 % positivity rate in a 3-day average of test results, according to state data. That’s the highest those numbers have been since late April.

State officials have warned that Alaska’s numbers are tricky to compare to other states because our total number of tests includes residents and nonresidents but our population numbers used for per capita calculations are based only on residents.