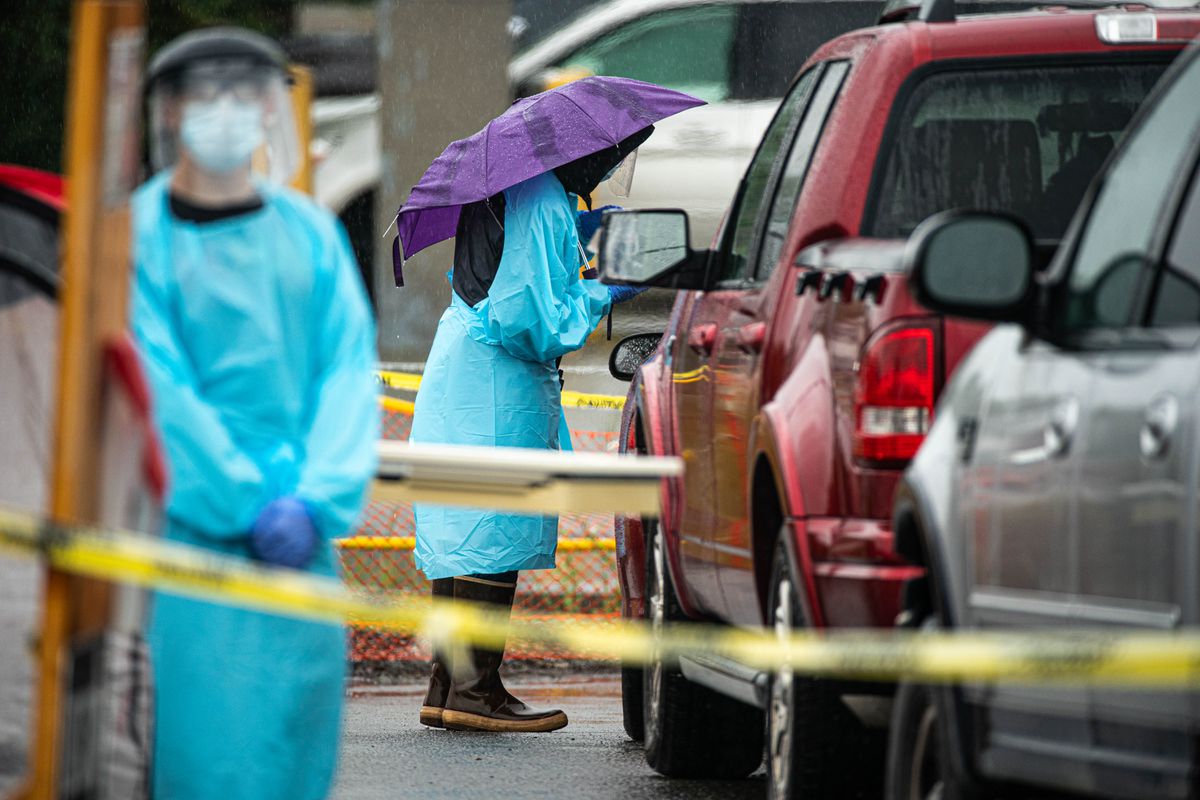 Medical workers take samples for COVID-19 in a mobile testing location in East Anchorage on July 8, 2020.

Medical workers take samples for COVID-19 in a mobile testing location in East Anchorage on July 8, 2020.

A total of 116 new COVID-19 cases were reported across Alaska on Sunday, the highest daily increase so far in the state. There was one new hospitalization and no new deaths.

Ninety-three of the new cases involved Alaska residents and 23 were in non-residents, according to data from the state Department of Health and Social Services.

The new cases reported Sunday — from midnight Friday night to 11:59 p.m. Saturday — break a previous record set just the day before, when the state reported 77 cases on Saturday.

In Alaska residents there were 29 new cases in Anchorage, 19 in Fairbanks, seven in Palmer, six in the Yukon-Koyukuk Census area, four each in Soldotna, Cordova and Wasilla, three each in Eagle River, Kenai and Juneau, two each in Chugiak, North Pole and the Nome Census Area and one each in Seward, Kodiak, Nome, Bethel Census area and the Matanuska-Susitna Borough.

In the non-resident cases there were 11 in Valdez, two in Fairbanks and one each in Anchorage, Seward and Prudhoe Bay. Seven of the cases are classified as “unknown” on the DHSS COVID-19 dashboard.

It wasn’t immediately clear what accounted for the increase in cases Sunday, if people were showing symptoms at the time of testing or how sick they were.

Alaska has reported a total of 1,774 cases of COVID-19 statewide, with 847 cases are currently active. Eighty-six people have been hospitalized since March due to COVID-19. Seventeen Alaskans have died related to the virus.

The state’s case numbers have risen sharply over the last month. Dr. Anne Zink, the state’s chief medical officer, wrote on social media Saturday that almost 30% of the state’s total cases have been reported during the past week.

There have been 145,475 tests processed statewide since the beginning of the pandemic. During the last three days, 1.54% of the tests conducted were positive.

Alaska is conducting about four tests per 1,000 people, according to data from the John Hopkins University of Medicine.

The number of Alaskans hospitalized related to COVID-19 remains relatively low in comparison to the number of people infected, which state health officials say could be because many of the more recent infections were found in younger people. Older people or those with underlying health conditions are affected the most by the virus and also have a higher rate of death.

Officials in Alaska warn that the rising case counts have maxed out the state’s ability to contact trace, which could lead to more cases in the future.

Health officials recommend using a mask or face covering in public spaces. Some cities, including Anchorage, now have mandates requiring them in public places. Officials also say people should maintain a 6-foot distance from each other outside of their households, frequently wash their hands and sanitize surfaces. Anyone feeling ill should stay at home.