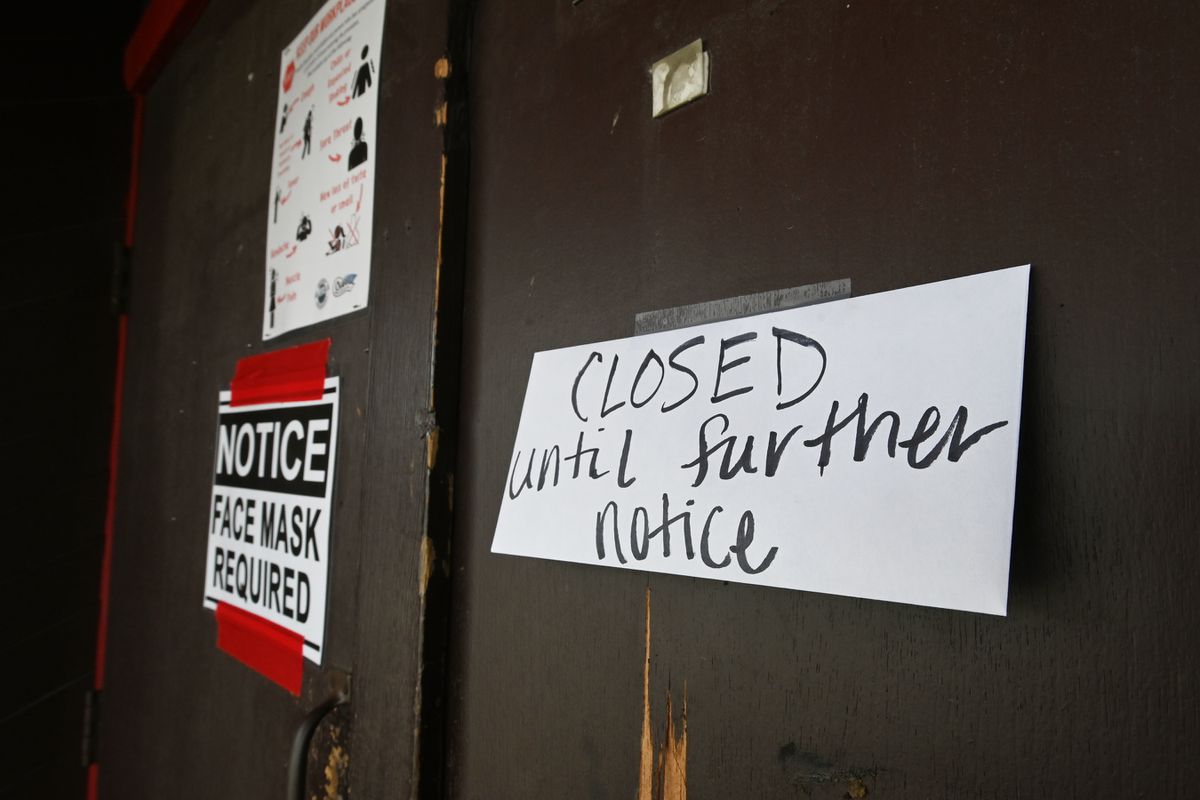 The Cross Roads bar has a sign posted on their door stating "CLOSED until further notice" on Monday, July 20, 2020. (Bill Roth / ADN)

The Cross Roads bar has a sign posted on their door stating "CLOSED until further notice" on Monday, July 20, 2020. (Bill Roth / ADN)

Two months after a committee of the Alaska Legislature approved the key elements of Gov. Mike Dunleavy’s plan to spend coronavirus aid, much of the federal government’s $1.5 billion assistance package remains unspent.

Many of the state’s cities and boroughs have only recently approved spending plans for their share of the money, which accounts for a third of the federal aid. The state’s $290 million small-business aid program was challenged in court, has been slow to approve grants and has been hampered by restrictions on who can apply. The National Oceanic and Atmospheric Administration hasn’t begun to give out $50 million in fisheries aid.

Money has also gone unspent because of good news: The state hasn’t needed to spend all of the $331.4 million it set aside for pandemic-related health care costs.

Some smaller programs are going quicker. A $10 million lottery for housing aid is on track to distribute payments to about 8,000 renters and homeowners by the end of next month. The Alaska Community Foundation is giving $35 million in grants to nonprofits in a partnership with the state Department of Health and Social Services.

Millions of dollars has gone to school districts for coronavirus-related expenses and for student lunch programs. State airports and the Whittier tunnel have received tens of millions, and municipal airports are receiving major assistance as well.

“Despite multiple lawsuits and significant legislative delays, the governor has overseen disbursement of over $550 million in CARES Act funds. Efforts are underway to further streamline relief spending, and the administration expects to significantly ramp up high-priority payments such as AK CARES small business grants in the coming weeks. Of the remaining funds, a significant portion is being held in reserve to address unforeseen pandemic-related expenses,” Jeff Turner, Dunleavy’s deputy communications director, said in a written statement.

When Congress passed the CARES Act in April, it funded specific programs within states and gave each state at least $1.25 billion for things that “are necessary expenditures incurred due to the public health crisis with respect to the Coronavirus Disease 2019 (COVID-19).”

Dunleavy directed $568.6 million of that to municipal governments, to be paid in multiple installments throughout the year. As of June 30, a bit over half of that money — $298.4 million — had been sent to cities and boroughs.

Critically, 90 of the state’s 228 local governments haven’t yet signed grant agreements with the state. Without those agreements, they can’t receive money.

As for the governments that have received money, reports submitted to the Office of Management and Budget show only $3.4 million spent through June 30. That’s almost certainly an underestimate — local governments have until the end of July to report June spending.

The Municipality of Anchorage, for example, formally allocated $23 million for business and rental relief, rental assistance, childcare relief, and an “administration flexibility fund” on June 23. That money doesn’t show up in OMB reporting.

That spending is a fraction of the $156.7 million the municipality will receive, and the Assembly has been holding a series of meetings to consider next steps.

The governor also ordered $290 million of CARES Act money to be set aside for a small-business grant program. That program has had to overcome legal challenges, and through July 13 had distributed only $11.4 million to applicants, according to a briefing given to state lawmakers.

The Department of Commerce is expected to announce additional speed-up efforts later this week.

In May, the governor set aside more than $331 million to cover health care costs, but officials at the Alaska Department of Health and Social Services said they can’t be certain how much of that money remains.

Because the COVID-19 pandemic is a federal emergency, many health care costs are reimbursable by the federal government. That means some spending doesn’t need to use the CARES Act money, but because reimbursements aren’t certain, the state won’t know the details until the paperwork is processed.

The state is also keeping some of the CARES money in reserve as a contingency. With case counts rising, officials aren’t certain what will be needed in the coming months.