Efforts underway in Alaska to remove statues of colonialists 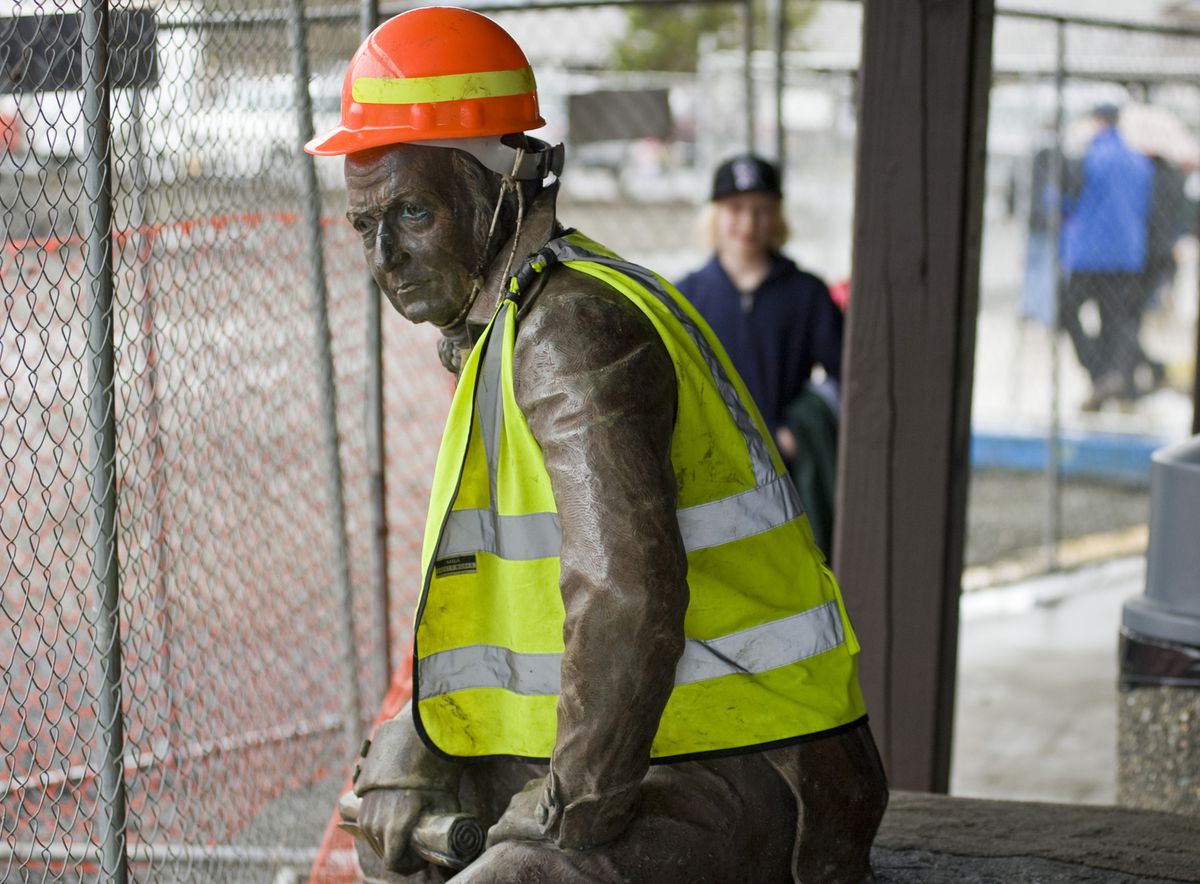 FILE - In this file photo taken Feb. 1, 2013, the bronze statue of 19th century Russian America Governor Alexander Baranov sports a hard hat and a reflective vest, after being moved from its original site in front of Centennial Hall in Sitka (James Poulson/Daily Sitka Sentinel via AP, File)

FILE - In this file photo taken Feb. 1, 2013, the bronze statue of 19th century Russian America Governor Alexander Baranov sports a hard hat and a reflective vest, after being moved from its original site in front of Centennial Hall in Sitka (James Poulson/Daily Sitka Sentinel via AP, File)

As many in the Lower 48 call for statues of Confederate leaders to be removed amid a national reckoning on race, some Alaska residents are conducting a similar movement demanding statues tied to colonization be eliminated or relocated.

A statue of Russian colonialist Alexander Baranov will be taken out of public view in one city and petitions are circulating calling for the removal of statues dedicated to former U.S. Secretary of State and Alaska purchase architect William Seward and Capt. James Cook, who has been credited with discovering land already inhabited by Indigenous people.

Indigenous people and others who signed petitions to remove those statues perceive them as symbols of colonialism, oppression and white supremacy, said Rosita Worl, president of the Sealaska Heritage Institute, a nonprofit organization promoting Native cultures in Southeast Alaska including the Tlingit, Haida and Tsimshian tribes.

“The history of their legacies with the expropriation of Indigenous lands and resources, the suppression and eradication of Native cultures and societies, and the resulting damage and intergenerational trauma experienced by Native Peoples are ignored and not recounted in history,” Worl said.

The Sitka Assembly voted July 14 to relocate the statue of Baranov, who founded the city in 1804 — on a site already inhabited by Alaska Natives — while serving as chief manager of the fur trading Russian-American Co. During his time as the governor of Russian America, Baranov was known as a brutal colonialist who murdered and enslaved Alaska Native people before the United States purchased Alaska from Russia in 1867.

The statue was vandalized just before its dedication in 1989 and has been criticized in newspaper letters and online posts for years.

The life-sized sculpture will move 40 yards from its outdoor, seated perch to the museum inside the Harrigan Centennial Hall, according Sitka Historical Society Museum Executive Director Hal Spackman. He said the relocation “promotes a respectful compromise in a difficult, somewhat divisive discussion.”

The Sitka Tribe of Alaska Tribal Council passed a July 1 resolution backing the relocation while stressing public spaces should exemplify the city’s diversity. Sitka “should lead with our nationally recognized voice as a leader in wellness, reconciliation and healing,” the resolution said.

Louise Brady, a 64-year-old Tlingit and one of more than 4,400 members of the Sitka Tribe, believes citizens should decide which statues are erected in communities. Brady said colonialism is the “root cause of historical trauma found throughout the tribes in Alaska” and underlies many social issues facing Alaska Native communities.

Joel Davidson, editor of Alaska Watchman, a conservative online news website, said the removal of historic monuments is “part of a much larger movement to deface and eliminate references to white European men who have contributed to the historic, scientific and cultural past of America.”

“No one claims they were perfect,” said Davidson, of Wasilla, about 40 miles north of Anchorage. “They were men of their times and could scarcely comprehend our rapidly changing contemporary views about sexuality, gender, race and multiculturalism. ... There are no perfect heroes – on the left or the right.”

Davidson said the statues should remain in place, perhaps with signs providing historical context or more monuments nearby.

Installing signs with Alaska Native place names is one measure toward recognition, but Worl noted the state Legislature’s refusal to accept proposed changes such as an update to the state logo she said “represents colonialism at its height” – the seal depicts sailing ships approaching the shoreline – indicates the need for continued social equity efforts.

Jen LaRoe, who started an online petition to remove the Seward statue in Juneau, wants the monument removed from “a place of distinction” without relocation elsewhere to continue its endorsement of colonialism.

“My issue is not with the person of William H. Seward, or his actions so to speak, but lie more directly with the current-day group of white people who decided it was a good idea to put up a symbol of this colonization that is so disrespectful to Alaska Native tribes and people,” said LaRoe, an art education program manager at the Sealaska Heritage Institute.

In Anchorage, Cook is memorialized with a statue overlooking the large inlet named for him.

Anchorage Mayor Ethan Berkowitz said he will let the nearby Native Village of Eklutna decide the fate of the Cook statue. Eklutna is a Dena’ina village, the sole Alaska Native community within the Municipality of Anchorage.

Berkowitz and Eklutna President Aaron Leggett, who is Dena’ina Athabascan, released a joint statement June 23 saying the process “should encompass deference to the names of places as they were called preceding the arrival of Captain Cook, and recognition of the history and stewardship of Alaska’s Indigenous peoples.”

Cook statues have also sparked petitions and protests in Hawaii and Australia, both places where the British naval officer made the first recorded European contact with Indigenous people.

Nicholas Galanin, who is a Tlingit and Unangax visual artist in Alaska, has an installation in Sydney that includes a burial plot dug in the shape of the city’s larger-than-life statue of Cook.

“This is part of a larger conversation. The statue and monument that many are afraid to remove is not the actual issue, the issue is systematic and often an ideology of change and truth,” Galanin said. “Explain to me why you feel the need to honor those who have raped women and children, stole land, held slaves and trafficked humans.”

Galanin signed the petition to remove the Baranov statue in Sitka.

“Remove the statue, destroy white supremacy, melt it down and make a statue of someone worthy of the bronze,” Galanin said.