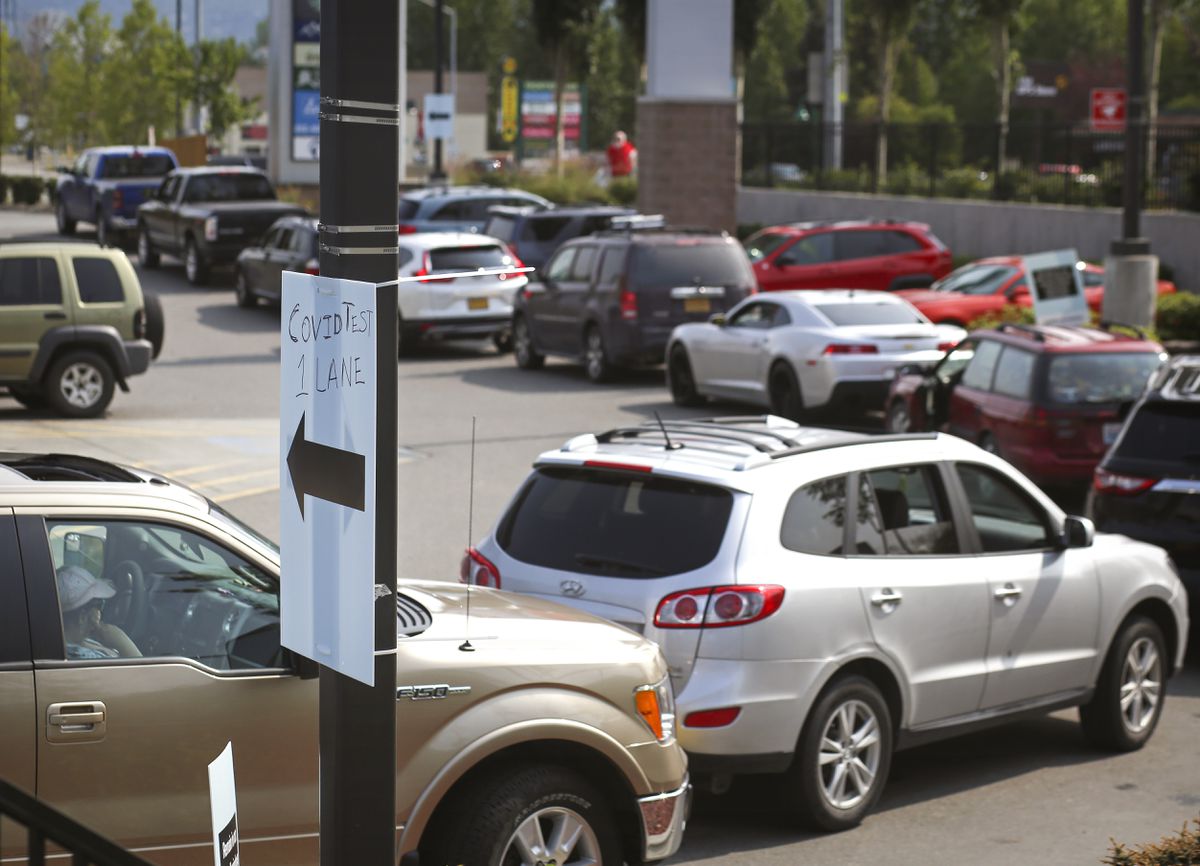 Vehicles line the parking lot and driveway of Walgreens on the corner of Lake Otis Parkway and E Tudor Road for COVID-19 testing as signs direct traffic through the site in Anchorage on July 28, 2020. (Emily Mesner / ADN)

Vehicles line the parking lot and driveway of Walgreens on the corner of Lake Otis Parkway and E Tudor Road for COVID-19 testing as signs direct traffic through the site in Anchorage on July 28, 2020. (Emily Mesner / ADN)

Alaska on Monday reported another death tied to COVID-19, an Anchorage man in his 70s. He is the 25th Alaskan to die with the virus.

That’s a drop from record daily highs reported recently in Anchorage: On July 26, the city reported 158 new resident cases; on Sunday, there were 111; and on Saturday, 110. Anchorage last week experienced the “worst week of the epidemic, in terms of new cases, active cases and cases per day,” Anchorage Health Department Director Natasha Pineda said at a community briefing Friday.

Two reported cases were workers at a North Slope oil field, said ConocoPhillips spokesperson Natalie Lowman. Both workers have been flown from the Alpine camp to Anchorage, and contact tracing has been completed, she said in an email on Monday.

“Those who were in contact with the positive cases on the Slope have either been moved to Anchorage or are currently being quarantined at a geographically separate camp at Alpine,” Lowman said. She said she wasn’t able to confirm whether the two workers were symptomatic or what condition they were in.

Lowman said ConocoPhillips had been “prepared for this eventuality since spring.” She said the company is working closely with the state and remains “committed to protecting the health and well being of our workforce and their families.”

All Slope personnel continue to following social distancing guidelines, wear masks, and avoid close contact as much as possible while at work, Lowman said. Slope workers receive temperature checks and are required to wear masks when they board any aircraft headed to the Slope.

One new hospitalization was reported in the state Monday, for a current total of 28 people sick enough with COVID-19 to require admission, along with 10 others who were under investigation for the disease. Since March, 138 people in Alaska with the virus have required hospitalization.

Monday’s newly reported cases have increased the number of active resident and nonresident cases statewide to 2,924, with 1,115 people considered recovered. Since March, 4,064 Alaskans and visitors have tested positive for COVID-19.

A total of 245,807 tests have been conducted. The average percentage of daily positive tests for the previous three days is 2.27%.

[Coronavirus vaccine will not change world right away]

Dr. Anne Zink, the state’s chief medical officer, in a series of tweets Sunday encouraged Alaskans to continue taking social distancing seriously, acknowledging that while “people are tired” of the virus, “now is NOT the time for parties or social gatherings.”

People are tired of COVID-19 we all want to spend time with friends and family. But with cases sharply rising in Alaska, now is NOT the time for parties or social gatherings. Consider the risks of the activities you're choosing.

Nonresident cases reported Monday include five in Seward, seven in Kodiak, one in Juneau, and three each in Bristol Bay and an unknown region. All but three were in the seafood industry, according to the state. Two cases were confirmed in North Slope workers.

The largest outbreaks in the state so far have involved seafood industry workers, and more than 250 are in quarantine or isolation in Anchorage after testing positive for the virus or being in close contact with someone who has.

In Anchorage, new restrictions on restaurants, bars and gathering sizes went into effect on Monday. They will continue until Aug. 30 in an attempt to curb the spread of COVID-19, according to city officials. Restaurant and bar owners told the Daily News on Friday they are worried about the strain the latest emergency order will place on them and their industry.

Health officials have repeatedly expressed concern about the potential for hospital beds and health care capacity in Anchorage and statewide to become overwhelmed in just weeks if cases continue at the current rate. Mayor Ethan Berkowitz said Friday the latest order was a necessary step to curb the latest outbreaks.

Last week, Gov. Mike Dunleavy announced a tightening of travel restrictions: Beginning Aug. 11th, nonresidents traveling into the state will be required to provide a negative test results before entering. Quarantining will no longer be an option, and airport testing will be reserved for returning Alaska residents.