‘I can’t afford to shut the doors again’: Anchorage restaurants and bars face another round of COVID-19 restrictions 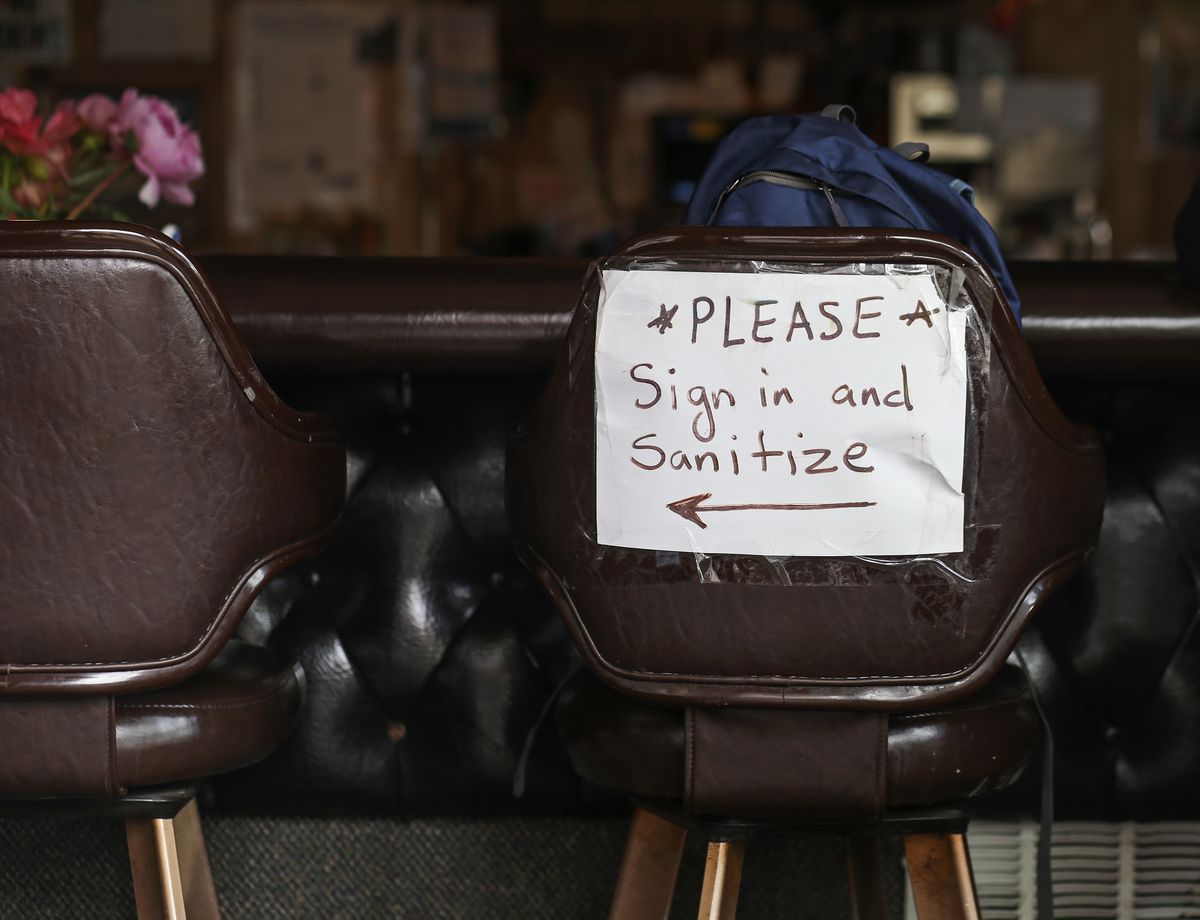 A sign directing customers to a sign-in and sanitizing station is taped to the back of a bar stool at Darwin's Theory in Anchorage on July 31, 2020. (Emily Mesner / ADN)

A sign directing customers to a sign-in and sanitizing station is taped to the back of a bar stool at Darwin's Theory in Anchorage on July 31, 2020. (Emily Mesner / ADN)

The new emergency order issued Friday by Anchorage Mayor Ethan Berkowitz, intended to curb the rise of COVID-19 in the municipality, will once again place significant restrictions on the city’s bars and restaurants.

In the hours after the emergency order was released, several Anchorage bar and restaurant owners reached by the Daily News said they are worried the coming shutdown of indoor service will cause irreparable harm to their industry.

The order takes effect Monday and will shut down bars and nightclubs except for takeout, curbside and delivery service. Dine-in service at restaurants and breweries will be restricted to outdoor areas, and tables must be spaced 10 feet apart. The order is set to last through Aug. 30.

“It’s going to hurt a lot of people and a lot of independent restaurants,” said Nancy Alip, owner of Jens’ Restaurant in Midtown. “I can’t afford to shut the doors again.”

Coronavirus cases have been rising rapidly in the municipality. Berkowitz said Friday at a community briefing that it is an “unfortunate” consequence that bars and restaurants will be so heavily impacted by the order.

COVID-19 is “particularly susceptible to spreading in those kind of close environments where people aren’t able to stay masked, where their social inhibitions might be relaxed a little,” the mayor said.

The city took several steps in July to address the risk of COVID-19 spreading in bars and restaurants, like releasing the names of establishments where there was virus exposure and enacting an emergency order limiting capacity. The city has said that releasing the names of businesses, a list initially made up of mostly bars and restaurants, was necessary because of limited contact tracing abilities and that other types of establishments such as churches could also be named.

The municipality is looking for ways to help businesses affected by the stricter new order, Berkowitz said.

“We have to use the blunt force instruments that we have at this point, and unfortunately it places a significant burden unfairly for a lot of reasons, but necessary nonetheless,” he said.

Anchorage hospitality businesses have been slow to recover since they initially had to halt dine-in service in mid-March and weren’t able to reopen at full capacity until late May. Some have closed permanently and few, if any, have returned to typical revenue levels, according to Bill Popp, Anchorage Economic Development Corp. CEO.

For Jens', a fine dining establishment and wine bar with an outdoor seating area of just four tables, future survival is uncertain. The restaurant has been bringing in about 50% of its usual revenue this summer. Alip tried running takeout during the first shutdown, but said it didn’t make sense with her style of food. Now, she has no choice but to try again, she said.

She’s also worried about her wait staff and how they’ll make ends meet in the meantime, she said.

Popp said that during the spring shutdown, about 4,000 workers lost jobs of the about 11,200 in the Anchorage food and drink service industry. By June, about 2,000 jobs had been recovered.

Because of ongoing negotiations between Congress and the White House, the federal boost to unemployment benefits remains uncertain and many workers in Anchorage could stand to suffer, Popp said.

Several bar and restaurant owners reached by the Daily News on Friday said they think the order places a burden on a single industry that should be the responsibility of the entire community.

“To say that this puts an uneven burden on our businesses is a serious understatement,” said Alaska Cabaret, Hotel, Restaurant and Retailers Association President Sarah Oates.

CHARR recently called on officials to mandate more health precautions in businesses and avoid a shutdown.

Oates said the municipality didn’t give the order it issued earlier this month limiting bar and restaurant capacity enough time to see an impact.

Daniel Wansor, owner of The Blue Fox, a cocktail lounge and restaurant, said his business has done “everything that we can possibly do” to keep customers and employees safe.

He’s purchased masks for employees and customers, doubled down on sanitation, implemented social distancing, canceled music events and shut down the karaoke machine, pool table and video games, he said.

“I have done everything that the city wants, and here we are again,” Wansor said.

Wansor said he has stopped doing almost all group activities like attending church since March to do his part in containing the virus. But he sees many other people in the community not doing so, and now his bar is paying the price, he said.

He lost four employees in the first shutdown and has been operating with a “skeleton crew.” Business has been down by about half. Now, he has no other option but to shut down for the coming month, he said.

“I don’t have an option of outdoor dining or takeout here. It’s just not possible. You have a choice of sitting in a parking lot or by a dumpster,” he said.

Oates said that outdoor dining is not an option for many other Anchorage businesses.

Turnagain Brewing owner Ted Rosenzweig said his business survived the first shutdown running takeout and filling to-go growlers. At the 10-foot space requirement in the new mandate, he can fit just about five tables in the outdoor seating area.

It’s not enough, he said.

Also hit by the lack of tourists, the business’s last quarter wasn’t profitable, he said. As summer wanes, its seasonal business winds down and the mandate takes effect, he worries that the restrictions will make a bad situation worse.

“What the future holds is a little bit terrifying,” Rosenzweig said.

Berkowitz on Friday said that he is “hopeful” that there will soon be more federal support for bars and restaurants, but said there’s a possibility that the municipal government may step in with “some measure of support” if that does not come through.

Oates said she feels heartbroken for the businesses and the community.

“The municipality and the public should be prepared to see a significant number of permanent closures of our local bars and restaurants over the next year,” she said.