Many Alaska families are eligible for $458 per child in COVID-19 aid, but the program has been plagued with difficulties 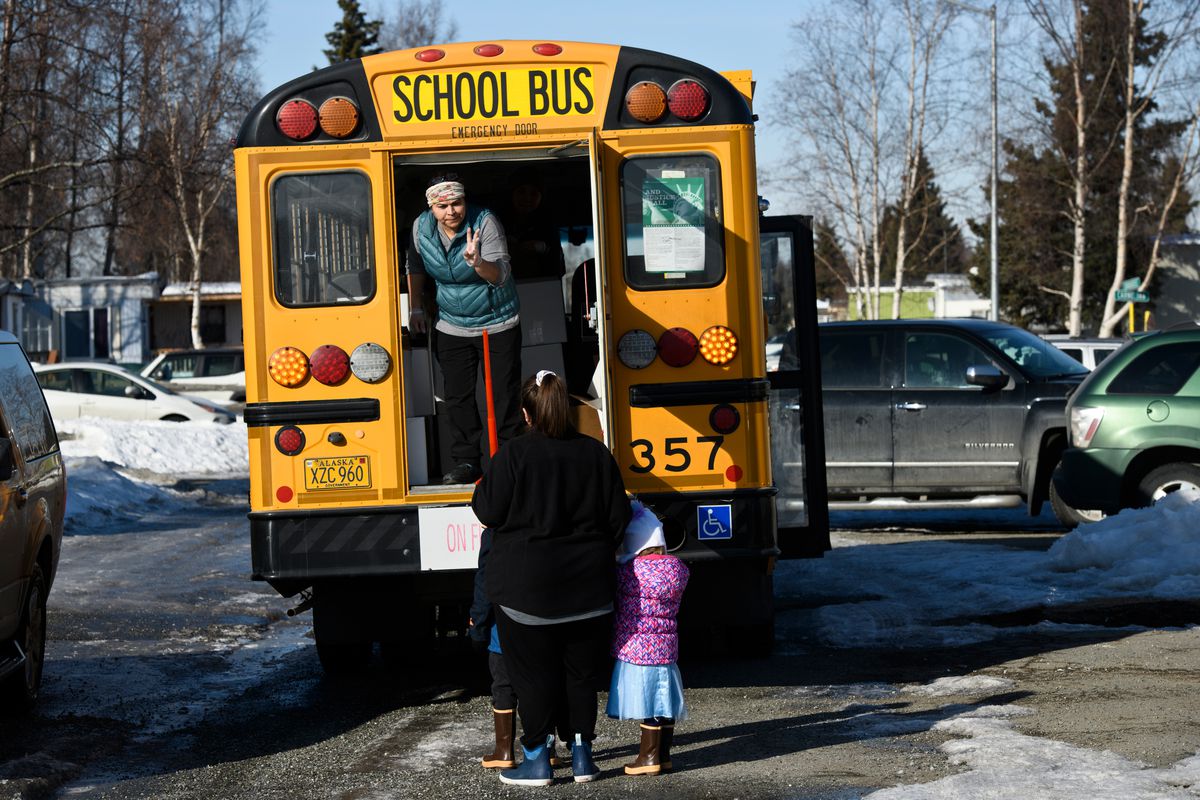 Rosa Edwards served a family at the Dimond Estates mobile home park on March 31, 2020, when the Anchorage School District buses delivered sack lunches and breakfasts to students while schools were closed due to COVID-19. (Marc Lester / ADN)

Rosa Edwards served a family at the Dimond Estates mobile home park on March 31, 2020, when the Anchorage School District buses delivered sack lunches and breakfasts to students while schools were closed due to COVID-19. (Marc Lester / ADN)

A program administered by the state will give hundreds of dollars of federal money to eligible families to help feed their children. The state just extended the deadline to enroll from the end of August to the end of September.

But a lack of information, mail delays, phone and internet access issues and a slowed program rollout with a tight original deadline have led to challenges in connecting families to the benefits, especially in rural Alaska.

The Pandemic-Electronic Benefits Transfer Program is to help reimburse families for unexpected expenses from when they lost access to school meals during pandemic-related school closures this spring, according to the Food Bank of Alaska. The Food Bank is partnering with the state to help enroll families.

Eligible families can get up to $458 for food for each child. Children must have been enrolled in the spring in a free or reduced-price lunch program or they must have attended a school with a free lunch program.

“This is a tremendous resource for families,” said Cara Durr, the Food Bank of Alaska’s director of public engagement. “...That’s some substantial money to help with groceries and help families that are struggling.”

The extra benefits come as part of the federal Families First Coronavirus Response Act, and the money will be disbursed through the Alaska Department of Health and Human Services’ Division of Public Assistance.

How the benefit works

About 73,000 Alaskan children were eligible for free or reduced-price lunch in the last school year, according to the U.S. Department of Agriculture. The aid amounts to about $31 million for Alaska families, the state estimates.

Money will be automatically disbursed at the end of August to qualifying families who are already enrolled in food stamp benefits, or SNAP.

But families on the free or reduced-price lunch program who aren’t enrolled in SNAP must opt in to get the benefits by submitting a form that’s been mailed to them by the state.

About 27,000 letters have been sent so far to the families that need to opt in to the benefits, according to Shawnda O’Brien, director of the state Division of Public Assistance.

The letters state that the deadline for families to enroll was set for Aug. 31. But due to concerns with mail delays, that deadline was extended Thursday to Sept. 30 to help give rural families more time to return the form, according to O’Brien.

The Food Bank of Alaska is also partnering with the state to help enroll families through a text or call-in service that allows families to use an online form instead of mail.

As of Friday, there is also an online screening form followed by an online application for eligible families on the Food Bank’s website, Durr said.

Many eligible families do not know about the program.

“There has not been an organized effort to really get the word out and to really ensure that there’s broad public messaging around the fact that these benefits are available,” said Rep. Tiffany Zulkosky, D-Bethel.

Many rural families might not have internet access or the ability to call or text the Food Bank — and that’s if they even know of the program, Zulkosky said.

“There’s already, under ideal circumstances, such difficulty in getting timely access to public information in getting access to typical services,” she said.

Then add in a pandemic, a fraught Postal Service and families who are now struggling with big changes to schools and economic hardship, she said.

When Bethel mother Melanie Fredericks received the letter on Monday from the division, she thought it was a scam, she said.

“I thought, ‘Huh, that’s quite strange. I don’t get mail from them and I don’t qualify for any of their benefits,’” Fredericks said.

She scoured the Division of Public Assistance website and found no information on the program. Fredericks decided to post on social media to see if anyone else had gotten a similar letter.

Immediately she heard from parents who also thought it was a scam or that they didn’t qualify, she said. Some parents threw the letter away as soon as they received it, she said.

Durr said many eligible families began receiving mailed letters with applications notifying them of the program just this week, and that letter now has the wrong deadline date.

Other eligible families have not yet received a letter, she said. Some won’t get one at all because the state could not acquire their addresses.

The state sent out another batch of letters to some of the families that were missed in the first batch with a new deadline date of Sept. 15, Durr said.

O’Brien has now said the state will accept applications until Sept. 30. The state is being “flexible about that deadline because we do recognize that there is a lot of delay in the mail system,” coupled with confusion from families that are unfamiliar with the public assistance division, she said.

But the division is up against a federal deadline — the aid must be disbursed by Sept. 30, she said. That means the sooner the division receives the enrollment forms, the better it can ensure families get the benefit, she said.

Whether the division can disburse money to families whose forms arrive in the last few days of September “will depend on how many are received up to the deadline and how fast staff can get the work done,” O’Brien said.

The state had received approval from USDA for the program in early June, according to a federal document.

But its rollout has been slowed by several issues, according to O’Brien.

The Division of Public Assistance first had to wait for information from the state education department on which families qualify. Then a computer system crashed for a week at the division, swallowing its information technology resources, she said.

“There were some competing priorities at the time,” O’Brien said.

Still, it’s working to get the program out “as quickly as possible,” she said. Her office is up against the federal deadline and will have to process all 27,000-plus forms, she said.

The Food Bank is working to help gather applications, but there’s been a deluge of requests from families.

Since Tuesday they had more than 650 voicemails and almost 5,000 texts. They have already processed more than 2,700 applications, she said.

The initial August deadline sent the Food Bank into a “bit of a triage mode,” and sparked concerns that families in rural areas would miss out on the benefits, Durr said. The forms to opt-in are often being mailed both ways and it only gave about 10 or 11 days for that back-and-forth delivery to occur, she said.

The Food Bank has been conducting information outreach to help alert families, Durr said. There is also some information on the division’s website.

The USDA recently authorized states to offer the benefits for school closures in August and September, but the money would also need to be issued by the Sept. 30 deadline, Durr said.

That’s almost impossible because there will be a new set of students, school district enrollment data for the new school year is not available until October and school districts all have different COVID-19 mitigation plans with varying levels of shutdowns.

“We are exploring what options might be available,” Durr said. “But there are some very serious barriers.”