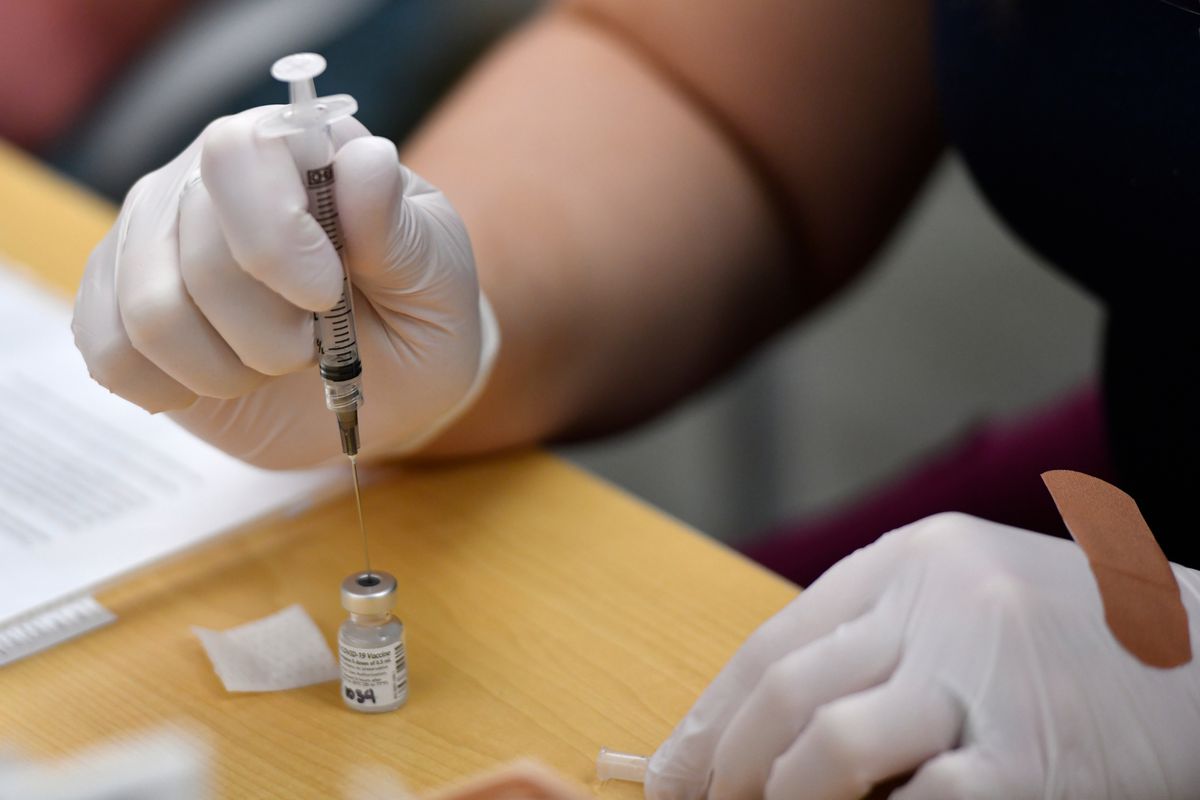 This story has been updated. Read our latest coverage of COVID-19 vaccine developments in Alaska here.

Wednesday evening, hospital officials reported that another worker who received a vaccine at the hospital that day received brief emergency treatment as well, but did not experience anaphylaxis, or what’s known as a life-threatening allergic reaction.

Multiple health care workers and officials on Wednesday were adamant about the importance of people continuing to receive the vaccine, and the state’s top health official said no changes to the vaccination plan were expected.

The Juneau worker felt flush and took an antihistamine around 10 minutes after receiving the vaccine Tuesday afternoon, authorities said. She felt short of breath and was transferred to the emergency room, said Dr. Lindy Jones, emergency room medical director at Bartlett Regional Hospital in Juneau.

Upon arriving at the emergency room, where Jones was the attending physician, the worker had an elevated heart rate and a red rash on her face and torso, he said. Jones began treating her for anaphylaxis with epinephrine and more antihistamines, which she responded to.

But her symptoms began to re-emerge, he said, and she was treated with more epinephrine as well as steroids. When providers tried to wean the worker off the epinephrine, her symptoms re-emerged before resolving once again, Jones said, and she was then moved to the intensive care unit for observation overnight, he said. She was in stable condition “and doing well” on Wednesday, Jones said.

“She was still enthusiastic that she got the vaccine and the benefits that it would give her in the future,” Jones said.

The worker, who was described as middle age, had a positive attitude throughout, Jones said, and was disappointed she won’t be able to get the second dose of the vaccine.

“She encouraged all us to press on,” Jones said.

The worker did not have a history of allergic reactions and is not allergic to certain vaccines, Jones said.

The worker was staying over night Wednesday for observation, according to Kathryn Bausler, a hospital spokesperson.

At Bartlett in Juneau, vaccinations began Tuesday and nearly 100 frontline hospital staff there have been vaccinated so far, Bausler said.

The second hospital staff member “experienced eye puffiness, light headedness, and scratchy throat ten minutes after being injected with the vaccine,” on Wednesday, according to a release from City and Borough of Juneau officials and the hospital.

Though the reaction wasn’t considered anaphylaxis, the worker was taken to the emergency department and administered epinephrine and other drugs, the release said.

“He felt completely back to normal within an hour and was released,” officials said. “He too does not want his experience to have a negative impact on his colleagues lining up for the vaccine.”

The federal Centers for Disease Control and Prevention considers having a history of severe allergic reaction to some other vaccine as a “precaution,” but doesn’t see it as a reason to avoid the COVID-19 vaccine, Dr. Jay Butler, deputy director for infectious diseases at the CDC, said Wednesday in a video call with reporters.

The CDC recommends that the vaccine be administered in facilities that have supplies for a potential severe allergic reaction and can monitor those who do have a history of such reactions for 30 minutes after vaccination instead of the standard 15 minutes, said Butler, who is also the former Alaska chief medical officer.

The safety of a COVID-19 vaccine is a “top priority,” Butler said, and is balanced against its risks. The Juneau worker’s reaction is the only such case reported so far in the United States.

Butler also encouraged anyone who received the vaccine to enroll in a federal program in which vaccine recipients receive daily check-in texts for the first week after vaccination. Butler said he want to continue transparent communication with the public.

“It’s important that people understand what’s happening, and what’s not happening — what we know and what we don’t,” Butler said.

The Alaska worker’s plight made national and international news Wednesday.

Two health workers in Britain had anaphylactic reactions and recovered after receiving the vaccine when that country began vaccinating people last week. Trials in the United States did not find serious complications among participants, though many had mild side effects including aches and fevers, the New York Times reported.

Alaska received a shipment of the vaccines, developed by Pfizer and BioNTech, on Sunday night and began vaccinating this week. Those prioritized the first shots include frontline health care workers, people giving the vaccines, community health aides, long-term care facility residents and staff as well as emergency personnel.

There are no plans to change the state’s vaccine schedule or dosing, the state’s chief medical, Dr. Anne Zink said Wednesday.

Multiple healthcare workers vaccinated Wednesday expressed continued confidence in the vaccine as a key tool to help bring the pandemic to an end.

”I’m worried that people are going to take that as an extra risk,” said Dr. David Scordino, medical director of emergency services at Alaska Regional Hospital. “It’s the same risk we take when we take any vaccination, when we take any medication. There’s always a small, small chance of something happening.

And while it was still quite early to understand exactly what happened in Juneau, Dr. Benjamin Westley, an Anchorage infectious disease specialist who treats some of the sickest COVID-19 patients in the city, noted that such reactions happen every year with flu shots.

And given the scale at which vaccinations are being distributed — to thousands of people daily — there are going to be reactions but it’s not surprising. To be sure, it might feel a bit surprising that the incident happened “in our own backyard,” Westley said, but he said it won’t be the last of such situations reported in the country or world. And it doesn’t change what was already known and understood about the vaccine, he said.

“I mean getting COVID is so, so bad and can lead to so many deaths,” Westley said. “I’m very confident that the vaccine is clearly way safer than getting COVID.”

Pfizer responded to questions about the incident saying it was aware of the Alaska incident but did not have all the details yet. Participants in the third phase of its drug trial were excluded if they had historically experienced severe reactions to vaccines or ingredients in the Pfizer vaccines, officials from the drugmaker said in a prepared statement.

“Overall, there were no safety signals of concern identified in our clinical trials, including no signal of serious allergic reactions associated with vaccine,” they wrote. “However, reports of adverse events outside of clinical studies are a very important component to our pharmacovigilance activities and we will review all available information on this case and all reports of adverse events following vaccination.”

Editor’s note: This story has been updated with additional information and context, including a statement from Pfizer, and that on Wednesday evening, hospital officials in Juneau reported another health care worker received brief emergency treatment after receiving the vaccine.