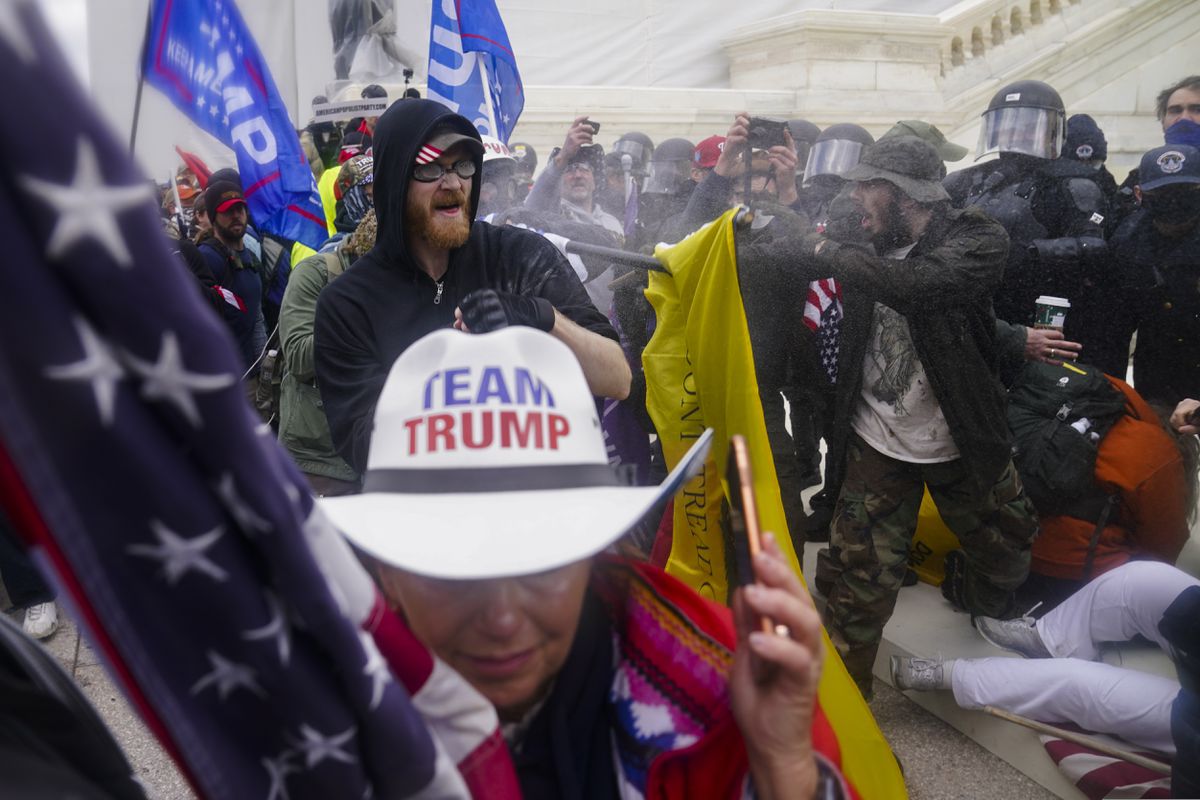 In this Jan. 6, 2021 photo, Trump supporters try to break through a police barrier at the Capitol in Washington. (AP Photo/John Minchillo, File)

In this Jan. 6, 2021 photo, Trump supporters try to break through a police barrier at the Capitol in Washington. (AP Photo/John Minchillo, File)

An Alaska state lawmaker who traveled to Washington, D.C., for the rally in support of President Donald Trump this week has floated a debunked theory that undercover antifa agents, not Trump supporters, bear responsibility for violently storming the U.S. Capitol on Wednesday.

On Thursday, state Rep. David Eastman, R-Wasilla, posted several links on Facebook to articles and videos explaining the insurrection at the U.S. Capitol on Wednesday as an elaborate plot by antifa, a loosely knit coalition of antifascism activists.

In a brief interview Thursday as he waited to board a plane back to Alaska, Eastman said he posted the videos because the idea that antifa bore responsibility “was just coming from some of the folks that were there, what they saw and heard personally.”

“And they seem genuine,” he said.

There is no evidence antifa orchestrated the riot, nor that the occupation of the Capitol was a “false flag event,” the nonprofit fact-checking website PolitiFact reported (along with a number of other accounts). Photos of some participants, such as Anchorage’s own Tim “Baked Alaska” Gionet have, however, revealed ties to far-right groups.

Despite a lack of evidence, the blame-shifting narrative that left-wing activists are responsible for storming the U.S. Capitol has been repeated by Republican politicians including Rep. Mo Brooks of Alabama and Rep. Matt Gaetz of Florida, and posited by Trump supporters such as attorney Lin Wood.

Former Alaska Gov. Sarah Palin also asserted on Fox News that the violence was due to antifa, saying she had “been sent pictures” that led her to believe “a lot of it is the antifa folks.”

Eastman says he believes he was the only Alaska legislator to travel across the country to attend what was billed as a pro-Trump “Save America March” that drew tens of thousands.

In a long statement on Facebook, Eastman denied that Trump had incited the crowd to violence and said he wasn’t nearby when the rally devolved into chaos, with hundreds rushing past police barriers and breaking windows to breach the U.S. Capitol building, where Congress was meeting for a final certification of election results.

Other legislators said Eastman had the right to participate in the rally, even if they disagreed with him.

Eastman “has the right to participate in any event he chooses,” said Rep. Bryce Edgmon, I-Dillingham, interviewed Wednesday as the events unfolded. “His stance certainly doesn’t reflect my values and the values of hundreds of millions of other Americans, regardless of their political affiliation, who support the Constitution and the process that will be followed.”

Asked about feedback from his constituents on his participation in the D.C. rally, Eastman said he’d heard both positive and negative, but “mostly positive.”

“They’re just grateful I took the time to go to D.C., and I appreciate that,” he said.

That support was not altogether evident on Eastman’s Facebook page Thursday. Under his posts about antifa and attending the rally, some commenters accused him of sedition and a half-dozen or more suggested he resign.