Alaska rises to No. 1 among states for per-capita coronavirus vaccinations 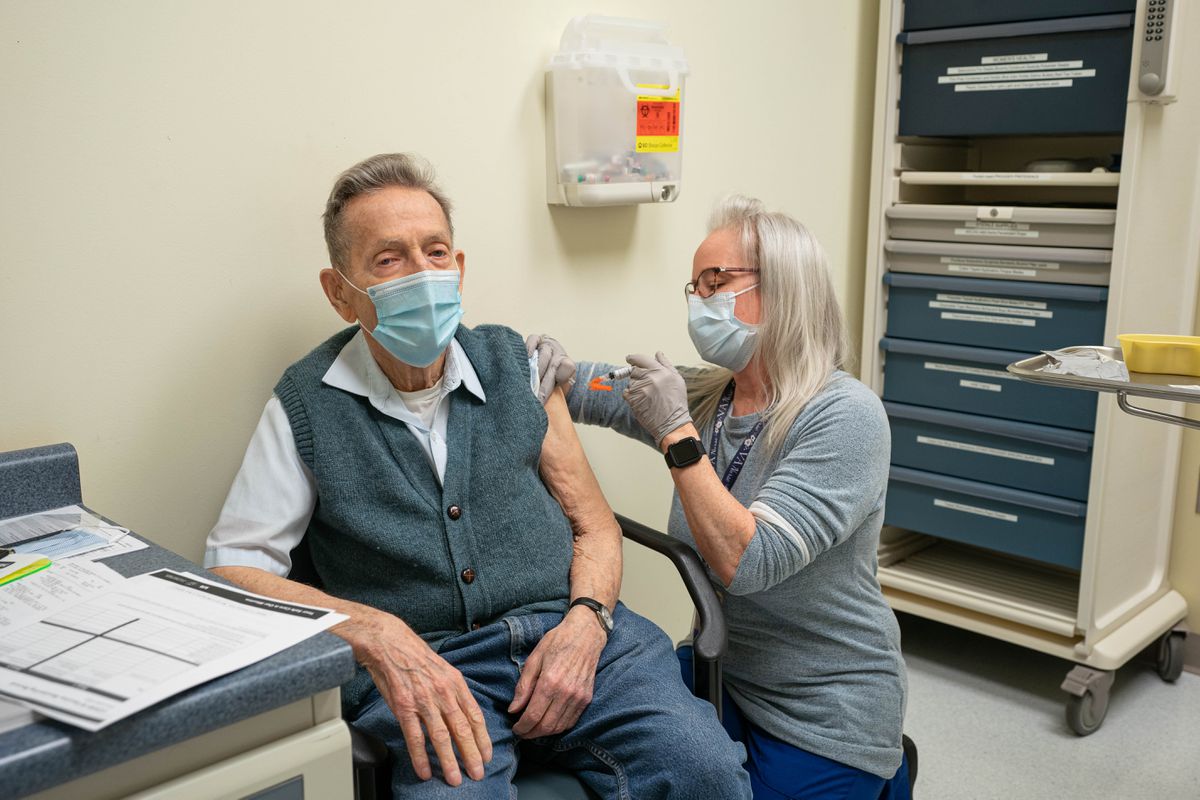 Alaska last week was administering more COVID-19 shots per capita than any other state in the nation, a striking statistic given the challenge of getting vaccine across rugged roadless terrain to far-flung communities in the nation’s only Arctic state.

Nearly 11% of the state’s population was at least partially vaccinated by Monday.

Still, Alaska’s rollout has hit rough spots, especially for seniors. And Alaska’s ranking isn’t nearly as high when it comes to shots administered out of the total received, where the state falls closer to the middle of the national picture, according to data from the CDC.

West Virginia, which relied on the National Guard and mostly local pharmacies to help administer vaccine, had used 83% of its vaccine by Sunday, and previously held the top spot for most residents vaccinated per capita.

By Monday, at least one dose of vaccine had gone into the arms of 80,300 Alaskans, and nearly 18,000 had received two doses. That means that just under 70% of the total vaccine the state had received in December and January had so far been used. That number does not include doses administered through the Department of Defense or the Veterans Affairs system in Alaska.

Health officials here say a number of factors helped push Alaska at least temporarily to the top of the list in terms of vaccine doses given per capita nationwide through January, according to a CDC tracker.

For one, Alaska received a high number of doses through the Indian Health Service for distribution through tribal health organizations on faster distribution timelines. In some rural communities, teenagers are already getting vaccinated.

Health officials here also decided to make Alaska the only state to get monthly — rather than weekly — shipments of vaccine, which they say added efficiency and predictable supplies to the process.

There are also numerous Alaska entities getting vaccines, the state’s chief medical officer, Dr. Anne Zink, said last week. Shipments of doses specifically for veterans and members of the military mean more vaccine is getting out overall, though the CDC doesn’t track those in the state’s total administered doses.

State officials say another reason for Alaska’s success is that declining COVID-19 cases allowed public health workers and health care providers to put most of their energy into getting vaccine out quickly, a trend seen across the country in states without surging numbers.

Coronavirus infections in Alaska declined over the past month following a surge in November and early December. As of Friday, hospitalizations were less than a third the numbers seen during the fall and winter, and test positivity had fallen from a high of 9% in November to just over 3%.

Alaska’s ranking is also relative: Other states are really struggling to get vaccine out. In Florida, vaccine websites crashed, call centers were overwhelmed, and many eligible people were turned away due to limited supply. In California, supply chain bottlenecks, limited federal guidance and stretched resources led to one of the slowest vaccine rollouts in the country.

Zink championed Alaska’s vaccine status on Twitter last week, pointing out that more people are vaccinated now than have been diagnosed with the virus since the pandemic arrived in Alaska in March.

Hey #Alaska - we moved into #1 for most people vaccinated/capita:https://t.co/8d1w49E3wR

and we have more people are vaccinated in Alaska than diagnosed with COVID-19 since the start of the pandemic.

I think our high vaccination has to do with 4 major things:

The state’s rollout has not gone entirely smoothly. Immediately, issues surfaced — as they did nationwide — in getting vaccine into long-term care centers. Some health workers declined to get shots.

Then frustration and confusion followed an accelerated eligibility period for people over 65 in early January. The crush of interest maxed out most appointments in less than an hour and overtopped the state’s supply of vaccine.

[‘Things came at everybody really fast’: Inside the sometimes rocky path of Alaska’s COVID-19 vaccine rollout]

State officials have acknowledged that the pace and process of coronavirus vaccination in the state has been slower and rockier than they had hoped. They say it could take all of February just to get through the categories of people that are open for vaccine now: health workers, care centers and that large group of people 65 and older.

The state also faces difficult decisions about who’s next.

Officials last week said they’re considering moving up teachers as schools return to in-person learning. Other groups including the seafood and transport industries are pressing for prioritization in future vaccination tiers, a large demographic that includes inmates and people staying in shelters as well as people with underlying health conditions.

A key factor that puts Alaska ahead of other states in terms of vaccine allotment is the high number of vaccinations designated for the Indian Health Service — so far, nearly 37,000 doses for the state’s 229 sovereign tribes in addition to the per capita allotment of 78,000.

Zink told reporters at a recent briefing that Alaska is likely unique in including a high number of IHS-provided doses in statewide vaccination counts and per capita calculation.

Nearly all other states with access for tribal allocations of vaccine opted to distribute that vaccine through federal rather than state channels, Zink explained. So those numbers aren’t included in the state-by-state tallies the way Alaska’s are.

Health officials here, however, can’t say just how many of the vaccinations completed so far were Indian Health Services doses.

“That’s a really hard number for us to track,” Matt Bobo, the director of the state’s immunization program, said Thursday.

Overall, tribal health organizations have been able to move more quickly through their vaccine shipments.

Beginning this month, in Bethel and surrounding villages in the Yukon-Kuskokwim region, anyone 16 and older became eligible for vaccination. By Friday morning, the region’s health corporation had vaccinated 5,233 people with at least one dose of vaccine - about a fifth of the region’s population.

The Maniilaq Association, a tribal health organization that serves around 8,000 people in Northwest Alaska, had so far vaccinated over 1,700 people with their first dose of vaccine and given over 800 second doses by Wednesday, spokeswoman Kelli Shroyer said.

Several teams are traveling by charter flight to different villages in the region to administer the vaccines.

Another reason for Alaska’s higher vaccination rate is that in December, top state health officials opted to receive vaccine in monthly batches, which means it can potentially run through that vaccine faster than can other states, which receive their vaccine shipments weekly.

Tessa Walker Linderman, who helps run the state’s vaccine task force, said that timeline can partially explain why Alaska is ahead. The choice to receive monthly rather than weekly shipments was to make it easier to plan distribution to tiny, far-flung villages, she explained.

“By getting the vaccine up front, we’re able to look at areas across the state where if we had to ship out weekly, we wouldn’t be able to use a whole tray of Pfizer or a whole box of Moderna,” she explained. As a result, these communities get access to more vaccine sooner.

Alaska’s large military presence also factored into the amount of vaccine coming to the state. Alaska has the most veterans per capita in the country. The U.S. Department of Defense and Veterans Affairs in Alaska were both sent separate federal allocations of vaccine.

The Alaska Veterans Affairs Healthcare system has received 2,300 vaccines and so far administered 1,600, Dr. Roger Bunch, chief of pharmacy service at the Alaska VA, said Thursday. The vaccines are being distributed at clinics across Alaska.

It’s not clear just how much vaccine is coming to Alaska via the Defense Department to active-duty service members. A military spokesperson said that exact number is not public information but noted that the CDC does include that number as part of its state-by-state allocation total.

The number of doses actually administered to active military members and veterans is not tracked by the state nor are they included in the per capita calculation, Zink said.

Herbert Worthley received his vaccine at a VA clinic in Anchorage on Saturday morning.

The 94-year-old World War II veteran said he’s looking forward to traveling again. Worthley would like to visit his older brothers, ages 99 and 97.

He’s also looking forward to being less of a hermit and getting back to his normal exercise: square dancing.

“I was dancing three nights a week and this thing come along and no more dancing,” Worthley said.

State officials expect to hear how much vaccine Alaska is set to receive in February this week.