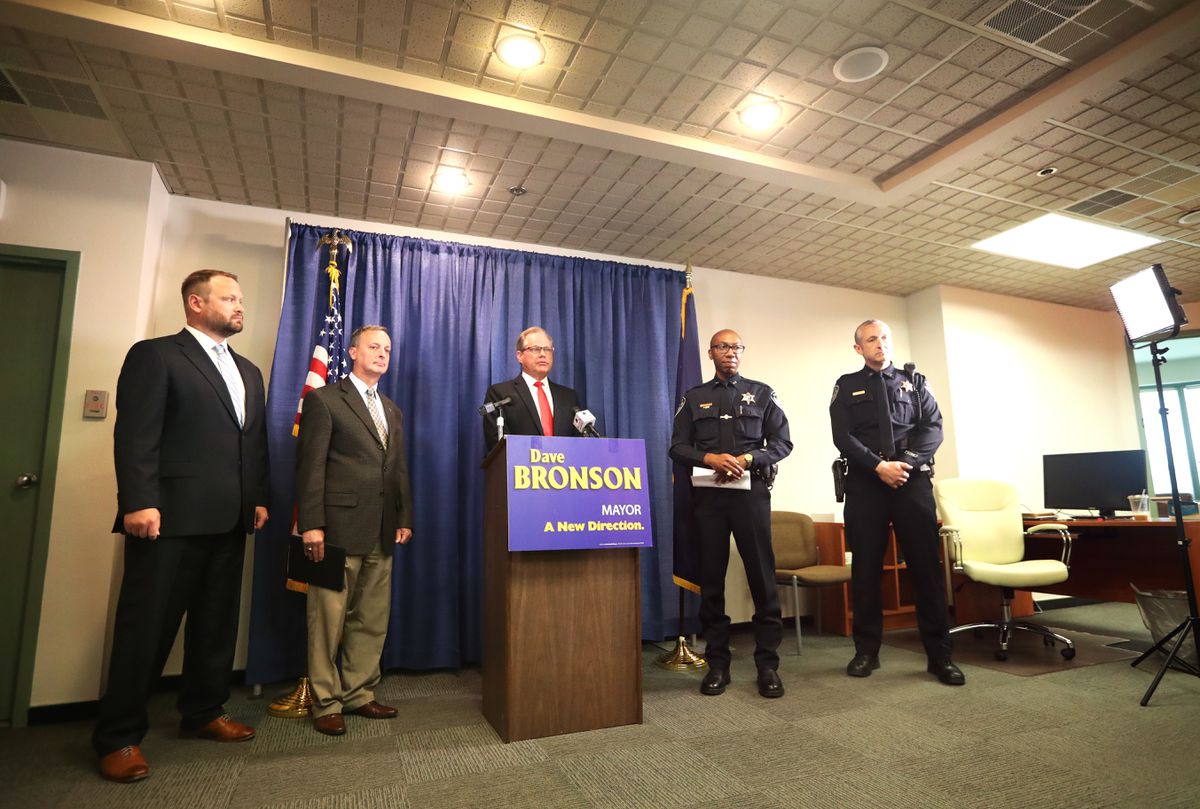 Bronson will be sworn in as mayor on July 1. He has regularly said public safety is one of his top priorities.

Asselin has been with the police department since 1997 and most recently served as captain of the patrol division, Bronson said.

Bergt is a former assistant district attorney and has also worked in private practice, Bronson said. His most recent work has focused on issues relating to public lands and regulatory programs, Bronson said.

McCoy served as deputy chief for Justin Doll, the police department’s former chief. Doll will officially retire in June but Acting Mayor Austin Quinn-Davidson announced in April that McCoy would lead the department while Doll took his remaining months off to use accrued leave.

During the mayoral campaign, Bronson said McCoy would not immediately be appointed to the post and that there would be a vetting process to select the best candidate. Bronson’s opponent, Forrest Dunbar, had said he would appoint McCoy to the position. Bronson, a former airline pilot, won the close mayoral runoff election with 50.66% of the vote.

He said Tuesday that he thoroughly interviewed all the men he appointed to top public safety roles. Bronson declined to say how many people applied or were interviewed for the role of police chief.

“The results speak for themselves,” he said. “I picked the best. We interviewed several people. I will not mention how many people we interviewed, but these gentlemen standing before you simply are the best and they have my complete confidence.”

Bronson said all candidates applied and went through the same process.

“We went through a very thorough process,” he said. “We went through, we got all the records and we went even into social media to look at folks because going forward, we have to make sure that in the interim, something strange hasn’t come up — and nothing. These are stellar gentlemen.”

Bronson said he was looking for “support of the rank and file and leadership and management skills” in candidates for police chief. Bronson said he won’t micromanage the new leaders; rather, he views his role as selecting the best leaders to manage their own departments.

McCoy is the first Black police chief in the Anchorage Police Department’s 100-year history. He’s been with the department for 27 years. He’s an Army veteran who served 10 years with the Alaska Army National Guard. He served four years as APD’s deputy chief of operations.

On Tuesday, McCoy said he was “honored and humbled” by Bronson’s appointment.

“I want to reaffirm my commitment to building trust and transparency in all we do,” he said. “I promise that I will always have the best interest of this community in my heart with every decision I make.”

Deputy Chief of Administration Michael Kerle will continue to serve in that role, McCoy said.

Anchorage voters approved a bond to fund technology upgrades for the police department and outfit officers with body cameras. Bronson said Tuesday that he had not yet read a draft of the department’s policy for body camera use, but he supported the measure in principle and deferred to McCoy for details about the policy.

The draft calls for all on-duty, uniformed officers to wear cameras at all times and record calls for service or interactions with the public “unless it is unsafe, impossible or impractical to do so.”

The draft also states that footage recorded by the body cameras will be released according to state or municipal laws, but does not include details about how footage would be shared when use of force or officer misconduct are involved.

McCoy said he wants to hear from the public about the draft and noted that a listening session is scheduled for June 16.

“What’s been published right now, the draft policy is a draft policy where we basically looked at national best practices, what other agencies are doing, and put that together as an outline for the community to look and to understand what these policies entail — but we’re not wedded to it,” he said.