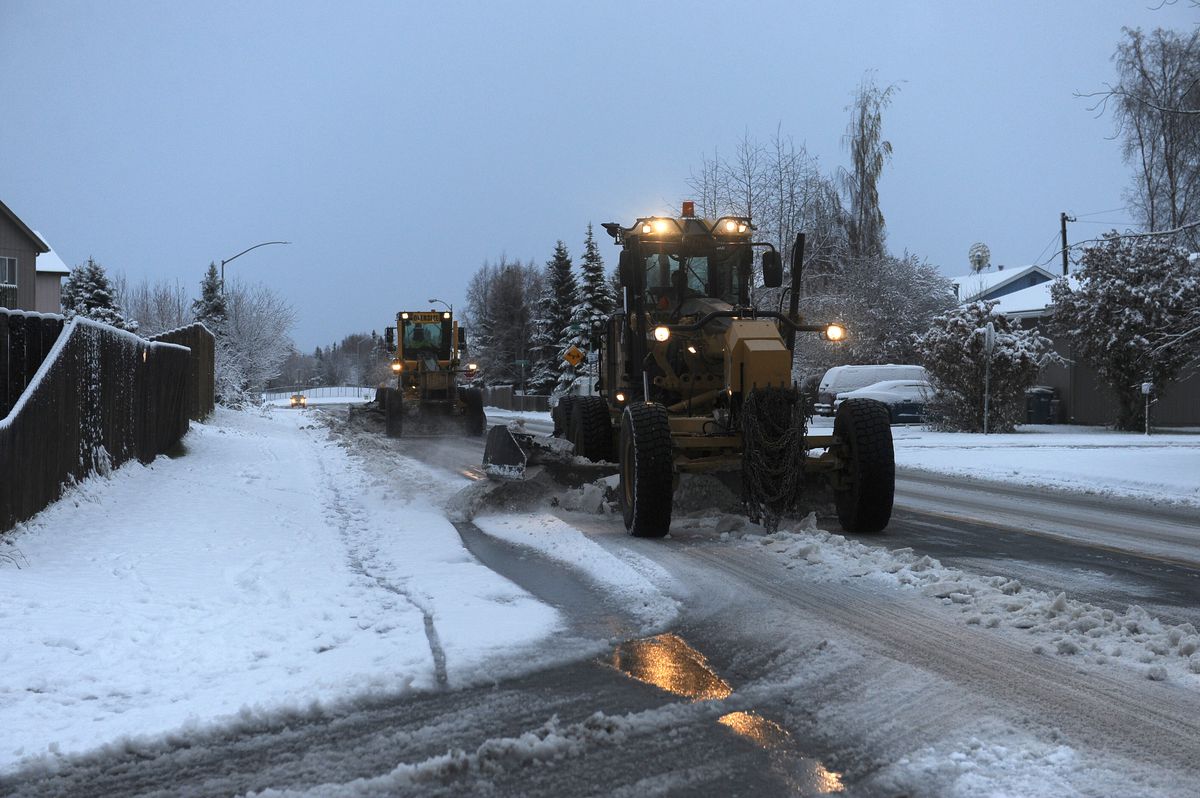 Should Anchorage have more cops on the street at the expense of snow removal or other city services?

Berkowitz framed tough budget choices during an Assembly debate over whether to ask voters to raise the city's tax on hotels, motels, and bed-and-breakfasts. The sponsor of the bed-tax proposal, Assemblyman Dick Traini, wanted to use the money for public safety. With a multimillion-dollar, double-digit budget deficit projected for 2018, Traini said he was worried about having to lay off cops.

More conservative members of the Assembly were quick to say public safety isn't the only place to cut, and pointed to labor costs.

After Assembly members rejected Traini's proposal, saying it needed more vetting, a frustrated Traini asked Berkowitz what would happen to the city's dozens of new police officers if there wasn't enough money to pay them in 2018.

Berkowitz said the city is facing a gap of roughly $15 million in 2018. Rising health care and labor costs, coupled with the fast-approaching payoff of the city's expensive upgrade to business software known as SAP, are the major drivers, he said.

He said expanding the police department is one of his administration's challenges. Doing so this year, he said, came at the expense of other services, like snowplowing.

"We had a choice between fulfilling our responsibility of growing the department, and also cut back on snow removal," Berkowitz said.

Storms pummeled the city over the past week, dropping more than a foot of snow. Berkowitz said he'd heard complaints about the streets. But there isn't enough money to go around, he said.

"It's a foreseeable consequence of not having adequate revenue to handle our responsibilities," Berkowitz told Assembly members.

Traini said he was worried about layoffs if the city didn't find ways to raise money.

During Tuesday's meeting, Assemblywoman Amy Demboski called threats to cut public safety "fearmongering." She pointed to more than $7 million given out as raises to city workers in 2016.

She also suggested the city should not have significantly raised pay for police and fire commanders last year, which is costing the city an extra $840,000 annually. Some assistant fire chiefs and police captains saw salary bumps between $30,000 and $45,000. City officials said there was a widening pay gap between union-represented cops and firefighters and their commanders, and a promotion from a union job meant a sharp pay cut. That was hurting the department's ability to recruit leadership internally, they said.

Assemblyman Bill Evans supported the boost in police and fire commander pay, which he called a way to make up for "deferred raises." But he said at Tuesday night's meeting that he also questioned salary boosts contained in new union contracts.

[Volunteers count the homeless and offer help in Anchorage]

Berkowitz said his administration is awarding raises in line with labor contracts mostly negotiated under prior administrations and approved by the Assembly. His administration has so far reached agreements on new contracts with three labor unions, including AMEA and IBEW, two of the largest unions.

A new contract with the International Brotherhood of Electrical Workers, which is awaiting Assembly approval, contains annual raises of 1.5 percent per year through the end of 2019. City manager Mike Abbott said in an email that the raises account for cost-of-living increases.

Berkowitz said he wouldn't support the pay freeze suggested by Evans and Demboski.

"I think there's a false economy that comes from not having competitive wages," Berkowitz said. "We want to be able to continue to recruit and retain good-quality people."

In the 2018 budget, Berkowitz said he expected to budget roughly $6 million more for police. He said he wants the department to have 450 officers.

But that will likely take money from other parts of the budget, or from an increase in property taxes, Berkowitz said.

Berkowitz said Evans and Traini should get credit for bringing up ideas to reduce property taxes while also bringing in more revenue. Evans proposed a sales tax, and Traini focused on the city's bed tax.

"I heard the Assembly say they wanted to spend more time to get something more cohesive together," Berkowitz said. "And we're going to continue those discussions."

Berkowitz has floated the idea of holding a special election for a sales tax. Most of the revenue would go to reducing property taxes, according to a draft version of the tax given to the Assembly in early January. But a slice would go to "areawide public health and safety," which could include patrols of the Seward Highway along Turnagain Arm.