Election cost doubles as Anchorage turns to vote by mail 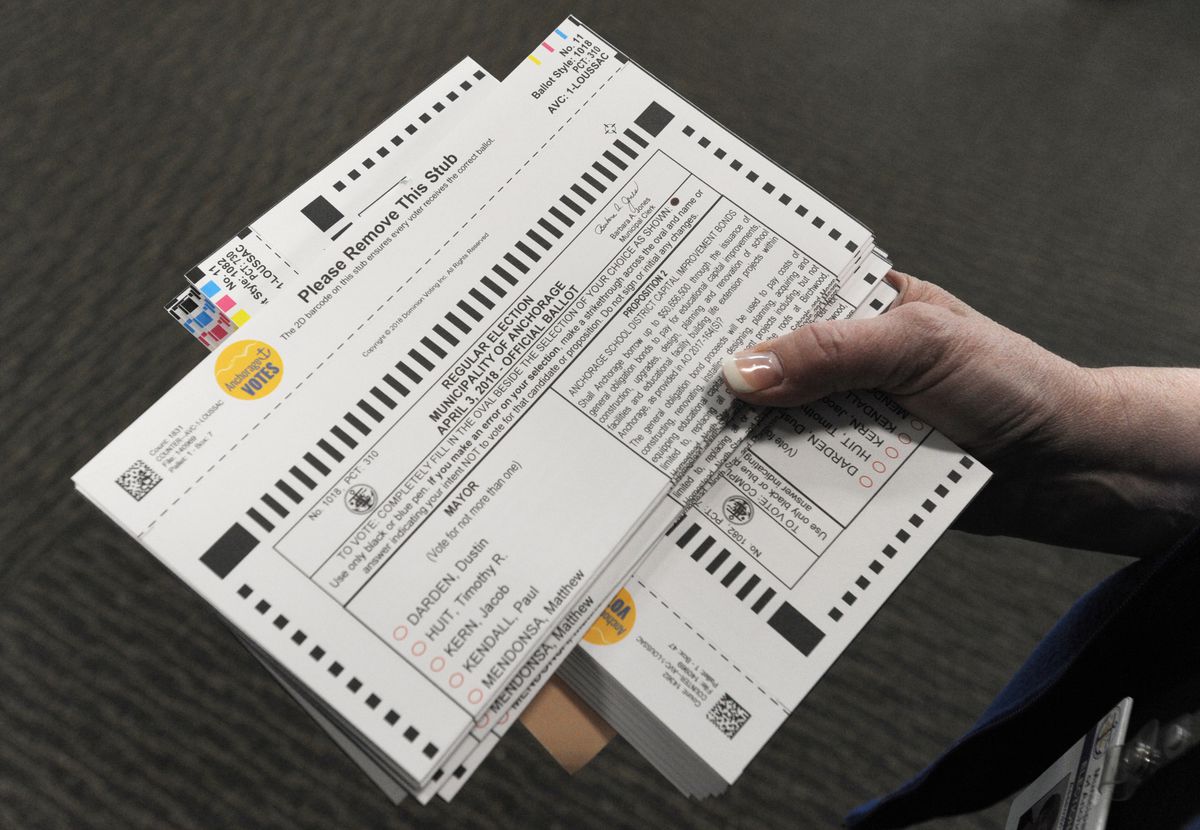 Elections officials said they weren't surprised by the higher price tag for the election, an experiment that recorded the highest number of voters in an April city election in city history. But the bigger bill likely won't go away anytime soon, officials said.

"It looks like going forward we will probably have higher election costs doing vote-by-mail than we did the poll-based election," said Assemblyman Pete Petersen, who chairs the Assembly's ethics and elections committee.

[Anchorage's vote-by-mail election was supposed to boost turnout. It shattered a record]

To prepare for the switch, the city also spent $1.2 million on equipment and other one-time capital investments, like a high-tech mail sorter and tenant upgrades to a new election headquarters on Ship Creek Avenue.

Anchorage officials began exploring the shift to vote-by-mail during the administration of Mayor Dan Sullivan. The Assembly first formally endorsed the move in late 2015.

Much of the rationale centered on boosting turnout, though some officials pitched it as a way to cut costs.

In a meeting with Assembly members Friday, city clerk Barbara Jones said printing, postage and rent on the Ship Creek building drove up the cost from prior elections. The 2015 and 2016 mayoral elections cost about $451,000, and the 2017 election cost about $614,000, according to data provided by Jones.

Next year, Jones said, the city will be able to save money in some areas, particularly labor and printing. Officials cautiously overstaffed vote centers and also printed more ballots than ended up being necessary, Jones said.

The city also spent a lot of money trying to ensure that voter registration information was accurate, which is required by law, Jones said.

Election workers sent postcards to the 218,000 voters who had been registered in the state's voter registration database. That effort cost about $100,000, Jones said.

Between the initial postcard and the end of the election, 40,000 of those voters in the state registration database were marked as "undeliverable." Only a few of those voters showed up in person to vote, Jones said.

Jones said the city and state will need to work to encourage people to update address information. But the vetting means officials only plan to send out around 179,000 ballots next year, a substantial cost savings, Jones said. Next year's election is projected to cost about $854,000, according to the data provided by Jones.

Assemblyman Fred Dyson said he was surprised that the vote-by-mail election cost more than a poll-based election.

"I thought we were going to be able to say this was a cheaper way to do it," Dyson said. "So yeah, I was surprised at that."

Petersen said the cost per voter is still rather low. He also said officials expect turnout to rise over time, which has been the case in other states. In King County, Washington, turnout has exceeded 90 percent in some elections, Petersen said.

"If we got anywhere near that kind of participation, I don't think anyone would be critical" of the cost, Petersen said.

Petersen also said a big capital expense was coming either way for the city and the state. The state's voting machines are notoriously old and malfunction-prone, he said.

One question likely to come up in future meetings: the idea of prepaying postage for ballots.

In the April election, anyone who was sending a ballot back through the mail had to include a first-class stamp, which led to some criticism that the city effectively had a poll tax.

The city offered drop boxes and several accessible vote centers, which did not require postage.

Jones said officials had decided the cost of a stamp was less than driving to a polling place, but that she expected the Assembly's ethics and elections committee would discuss the idea of using prepaid business reply mail.

The main change would be that ballots would have to arrive on Election Day, Jones said.

Meanwhile, state officials will meet in May to discuss the prospect of using Anchorage's equipment to run a future state election by mail. A number of states, including Oregon and Colorado, run statewide elections by mail.

Jones said the city will be talking to the state about running their elections out of the new election headquarters.

But at least in the short term, the state's November election will be poll-based — requiring some "unlearning" for Anchorage voters who are now used to vote-by-mail, the Assembly's new chair, Forrest Dunbar, pointed out at Friday's meeting.