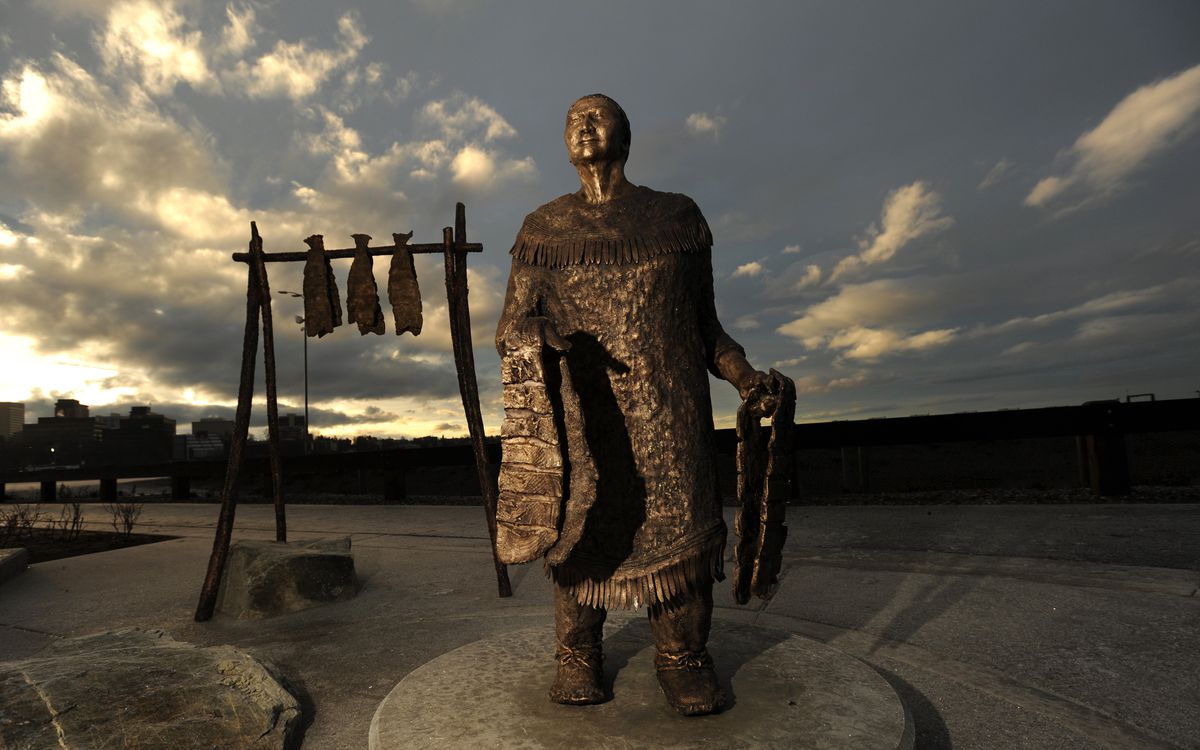 A bronze statue of an Alaska Native woman quietly rose up last month not far from the mouth of Ship Creek in Anchorage.

The woman holds dried fish and her face is textured. She wears traditional Dena’ina dress hemmed with quills and stands before a rack hung with fish skins. At her feet, fish, silhouetted in the concrete, swim into a partially-submerged fish trap.

The art installation, at the Anchorage small boat launch, was more than a decade in the making. The piece marks the spot of a traditional Dena’ina fish camp at the mouth of Ship Creek. It is a commemoration of the Native Village of Eklutna and cultural history, and a rare example of outdoor art in the Anchorage area that reflects Alaska Native culture, people involved with the project said.

“It’s a pretty significant thing to have our people accurately represented, in an accurate likeness of what we’re doing,” said Joel Isaak, the Soldotna-based artist who created the sculpture who is himself Dena’ina.

Over generations, members of the Athabascan-speaking tribe have started the fishing season at a traditional fish camp site overlooking the Port of Alaska. Fish traps were used to catch hooligan and small stickleback in the early spring before salmon returned to the creeks. The fish camp was used up until World War II, when the U.S. Army took over the site.

In the 2000s, big infrastructure projects planned for the area threatened to disrupt the site.The idea of an art installation emerged as a cultural mitigation for Knik Arm Crossing project, said Aaron Leggett, the president of Native Village of Eklutna and the curator of Alaska history at the Anchorage Museum. At the same time, a planned expansion of the Port of Anchorage was in the works.

The port expansion never happened and ended up mired in lawsuits. But the main contractor on the project, the United States Maritime Administration, kept a promise to fund art honoring the Native Village of Eklutna, said Jocelyn Fenton, program manager with the Denali Commission. The total budget ended up at about $266,000, Denali Commission records show.

Now, the sculpture of the woman and the fish camp stand as a pointed counter to the statue of Captain James Cook, the namesake of Cook Inlet whose statute prominently overlooks the Alaska Railroad headquarters, Leggett said. He said members of the tribe wondered why the community built a statue for an explorer who sailed up the inlet but never walked on the mainland.

Outdoor art reflecting Alaska Native culture is unusual in the Anchorage area. The Anchorage Museum has made a declarative statement on the front of its building: “This is Dena’ina Elnena,” the homeland, but that’s perhaps the most visible example, Leggett said. At the small boat launch, the nearest public art piece is a giant anchor, a U.S. Navy installation.

The bronze Dena’ina woman in the sculpture is modeled after Olga Nikolai Ezi, a well-respected elder in the Native village of Eklutna known as “Grandma Olga.” Ezi died in the mid-20th century. She was Ahtna and married a Dena’ina chief, Simeon Esia. They had five children and established much of the lineage of the tribe, according to interpretive panels accompanying the installation.

Isaak, the artist, is a distant relative of Ezi’s. The village of Eklutna gave him photographs of Ezi’s descendents so he could create a semblance of her, he said.

He said the sculpture wasn’t meant to be an exact replica of Ezi.

“Her family should see themselves in her, was my goal,” Isaak said.

The materials of the woman’s dress are also identifiable as Dena’ina, Isaak said. She wears traditional clothing, a women’s dress embellished with quillwork and fish-skin boots in an identifiable style of the Upper Cook Inlet Dena’ina.

Isaak researched for years how to actually make the clothing himself out of real-life materials. He can weave porcupine quills and tan hides in that style. He makes and wears fishskin boots.

Isaak said he wanted to acknowledge that the Dena’ina people have been fishing in this spot for hundreds of years. He said the sculpture also seeks to honor the matrilineal structure of Dena’ina culture, and Ezi’s efforts to pass her language and culture down to her family and past generations after it was forcibly removed during colonization, Isaak said.

At the same time, the installation is meant to contrast with the harsh urban environment that surrounds it. He said it calls into focus the amount of what he described as “overwriting and supplanting” that has happened through Western contact and colonization.