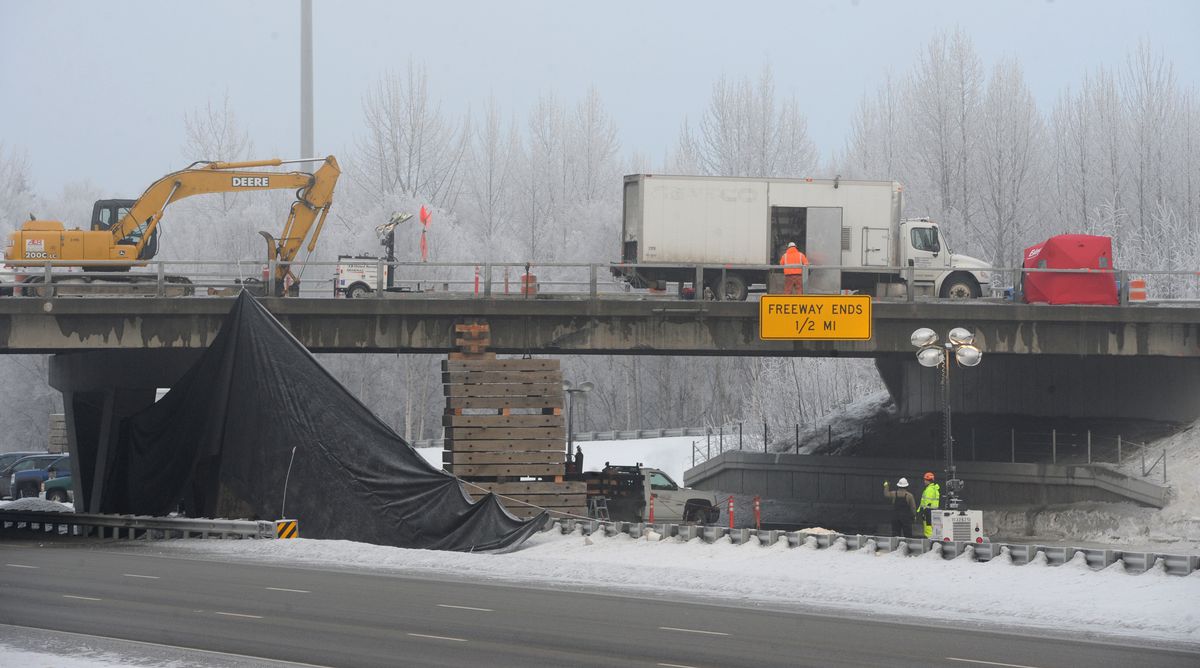 Work continues on the Tudor Road overpass on Sunday, Jan. 6, 2019. All northbound lanes of the Seward Highway are closed to traffic at Tudor Road. (Bill Roth / ADN)

Work continues on the Tudor Road overpass on Sunday, Jan. 6, 2019. All northbound lanes of the Seward Highway are closed to traffic at Tudor Road. (Bill Roth / ADN)

Northbound lanes of a heavily traveled stretch of the Seward Highway in Anchorage will remain closed until at least midweek while crews work to repair an overpass struck by a dump truck, the Alaska Department of Transportation said.

A dump truck with its bed in the raised position hit the Tudor Road overpass, which has a 16-foot clearance, early Thursday morning. The raised bed “shattered” a concrete girder, DOT spokeswoman Shannon McCarthy said.

The Department of Transportation warned commuters getting back on the roads Monday morning to plan for an alternate route. Northbound lanes of the Seward Highway are closed at the Tudor Road exit. Southbound lanes are open.

#Anchorage #SewardHighway We cut the girder & removed the 1st section at 8:30pm. We’ll be working on next section & will break up the girder on ground for removal.

The state asked for $1.5 million in funds to get repairs started, said McCarthy, and hired the same contractor, Sandstrom and Sons, that handled the “bridgepocalypse," in Eagle River, a truck strike that also damaged an overpass and caused an epic traffic nightmares for commuters in March 2018.

On Saturday, the crew worked with cranes to remove the damaged girder, installing a “crib” to support it and drilling to prepare it for removal, according to McCarthy.

The overpass itself is structurally sound but the Seward Highway lanes are closed so the workers can remove the damaged girder, McCarthy said.

Workers are contending with frigid temperatures forecast to last through the end of the work week.

At the earliest, the repairs will be finished by midweek, McCarthy said said.

Two events involving a truck strike leading to a major and extended shutdown of a highway in a year is “unusual," McCarthy

She pointed out that circumstances are different: In the March Eagle River incident, the driver wasn’t aware his load was too high to clear the overpass. In Friday’s incident, the driver apparently had inadvertently failed to put the bed back into the lowered position, McCarthy said.

Anchorage police have not said whether they’ve cited anyone for the Friday overpass strike. McCarthy said she did not know who owns the dump truck.