What happened to Destiny Pittman? 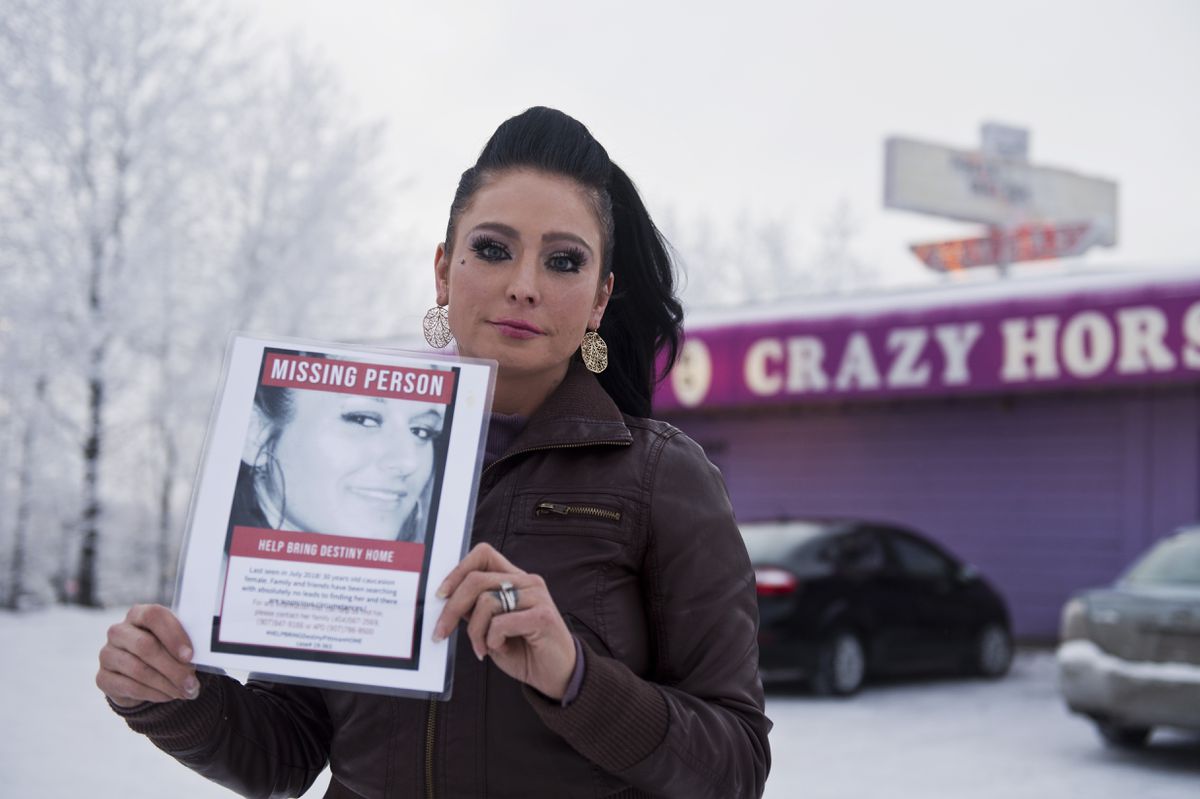 Yvette Blezinski posted pictures in the search for her friend Destiny Pittman in Anchorage locations, including the Crazy Horse Saloon, on Monday. (Marc Lester / ADN)

Yvette Blezinski posted pictures in the search for her friend Destiny Pittman in Anchorage locations, including the Crazy Horse Saloon, on Monday. (Marc Lester / ADN)

Yvette Blezinski pulled into the parking lot of the Crazy Horse Saloon on a glittery cold January afternoon.

Teetering on heels, her hair in a precise pouf on top of her head, she marched inside the Anchorage strip club armed with laminated missing posters and Scotch tape.

She was looking for Destiny Pittman, known onstage as “Dominique” or “The Queen of Crunk,” a brash exotic dancer who in recent years built a following performing in Alaska strip clubs, from Homer to Anchorage.

Blezinski and Pittman had been friends since they were young, so close that they called each other cousins or sisters.

In recent years, Blezinski had watched as Pittman became unmoored following the sudden death of her mother, withdrawing from family and her flamboyant stripper persona.

Eventually, she disappeared. No one has seen or heard from Destiny Pittman since summer, according to Blezinski.

“Something is very wrong,” she said.

Now people close to Pittman fear something awful has happened. She was reported missing to the Anchorage Police Department on Jan. 3, joining the hundreds of adults who go missing every year in Anchorage.

Police say many of those reported missing turn out to be hiding out or just don’t want contact with their family. But some are truly in danger -- and it can be hard to begin an investigation until there’s proof a crime has been committed.

For friends and families, the not knowing is torment.

“I need her to come home so I can breathe again,” said Pittman’s grandmother Brenda Lunsford.

Last year, 476 adults were reported missing to Anchorage police. An additional 375 runaways age 18 and under were reported.

“It is not a crime to be missing,” Oistad said. “If an adult chooses not to contact their family or friends or go to work -- they have that option.”

Most of the reports police do get are vague.

“It’s just -- hey, my nephew is in Alaska and we haven’t heard from them,” said Capt. Dave Koch, who heads the APD unit responsible for investigating missing-persons cases.

When someone calls to report a missing person, officers gather information on the circumstances of the disappearance and enter the name in a statewide database, Koch said. If police run into the person at a crime scene or traffic stop, they come up in the database as missing. Then a police officer will tell the person they have been reported missing.

“Half the time they say, ‘I’m missing for a reason,’ ” he said. “There’s nothing we can do to make someone talk to their relatives.”

As a courtesy, officers will typically call the friend or family member who reported the person missing and say police made contact and the person appeared to be fine, Koch said. But it stops at that.

Harder is the gray area of people who are missing and may well be in danger -- but there’s no immediate evidence that a crime has been committed.

Cases where there are obvious suspicious signs are easier to begin investigating, said Koch: A person who shows up to work every single day and then doesn’t -- plus their bank account is drained.

But police need to have probable cause that a crime has been committed before they can investigate using the tools available through search warrants, he said.

“Sadly, I think across America there are many people missing where foul play is involved, and it’s not discovered until something (is found) to show that there was a crime.”

Pittman’s case has some elements that could be cause for concern, Koch said. But police need to have a place to start an investigation.

It’s hard on everyone not knowing whether a person is missing because they have been harmed or held against their will, or because they don’t want to be found, Koch said.

Ask Kenny Wilson. His daughter Lori Dee Wilson walked out of a drug treatment center in Juneau on March 24, 2016. She hasn’t surfaced since.

Wilson has tirelessly worked to find his daughter, making a dozen trips to Juneau from his home in Dillingham, canvassing parks, homeless encampments and anywhere else he can think to look. He calls police and the FBI to check in. He goes on Facebook daily and posts in missing-persons groups about Lori Dee.

He believes she is alive, somewhere. But it is getting harder to think of places she could be.

“It’s kinda hard to be in hiding in Juneau this long, and she hasn’t touched her bank accounts,” he said.

His advice to families of missing people: Be persistent.

“We’re just going to keep looking for her until we find her,” he said.

Destiny Pittman moved to Alaska with her mother, who was dating a pipeline worker, a decade or so ago, according to her grandmother. She had also lived in South Carolina.

Most of her family, including her aunt and grandmother, still live in the small town of Jackson, Georgia.

Pittman is “fun and loud, tons of friends, would take a dare,” said Brenda Lunsford, her maternal grandmother. “Personable, gregarious. All the good words.”

As soon as Pittman was old enough, she began pursuing a career as an exotic dancer, performing at the Crazy Horse, Fantasies on Fifth and Good Time Charlie’s in Soldotna. She even worked on the Wild Alaskan, a commercial fishing boat repurposed as a strip club that operated in Kodiak and Homer before the state shut it down.

“It’s nice to say I come work on a $3.5 million yacht,” Pittman told a TV reporter about her stint on the “floating strip club.”

By all accounts, she was a savvy and aggressive entrepreneur.

As the “Queen of Crunk” -- a nod to her Georgia roots -- she garnered a following of thousands on social media, where she posted selfies or videos of her athletic, gravity-defying stripping performances. Once, she appeared on “The Jerry Springer Show.” Clubs in South Carolina and Georgia flew her out to perform, said Blezinski.

“She loved doing it,” Blezinski said. “And she made crazy money.”

In the fall of 2015, Pittman’s world fell apart when her beloved mother died suddenly in Georgia. Pittman was in Alaska when it happened, which made the shock even harder to bear, said her grandmother.

Afterward, she stopped performing as regularly. Her family and friends suspected she had spiraled into drug addiction. She went off social media.

But people still saw her around.

In August, she texted her grandma to say that she wanted to visit but tickets were expensive. Lunsford said she began to feel something was really amiss when Pittman didn’t call at Thanksgiving or Christmas, something she never missed.

It took a long time for people to put things together that Pittman might be in real trouble, because she’d had spells of being out of contact with people before, Blezinski said. Anchorage police say she’s been reported missing at least once in the past.

Her family and friends say they’ve never been judgmental about her life or work.

They feel that if she could get in contact, she would. They’ve been trying to reach Dominick Lozano, a former boyfriend Pittman was often seen with.

“You know how some people are, they think because of the lifestyle somebody is living they are not important," Pittman’s aunt Burgundy Lunsford said. "But Destiny is important.”

Not for a long time

On Monday, Blezinski printed copies of a missing-person poster and started hitting the places Pittman might have been.

The Crazy Horse was the last place Pittman had worked. Inside, the bartender and DJ said they’d talked to Pittman just a few months ago, but Blezinski didn’t buy it.

“This is not normal,” she muttered, taping a poster to the wall in the entrance alongside poker tournament results and photos of the owner’s birthday party. “Nothing about this is normal.”

Blezinski left the Crazy Horse and drove next to the Chelsea Inn Hotel, a mangy place on Spenard Road. Nobody there had seen Destiny, so she moved on to the Black Angus Inn.

The guys working the front desk peered at the missing poster.

“Last time somebody saw her was in July,” said Blezinski. “I’m worried she may have been in here with some people who were not good.”

Another man in the lobby said he knew Destiny, had seen her, but not for a long time.