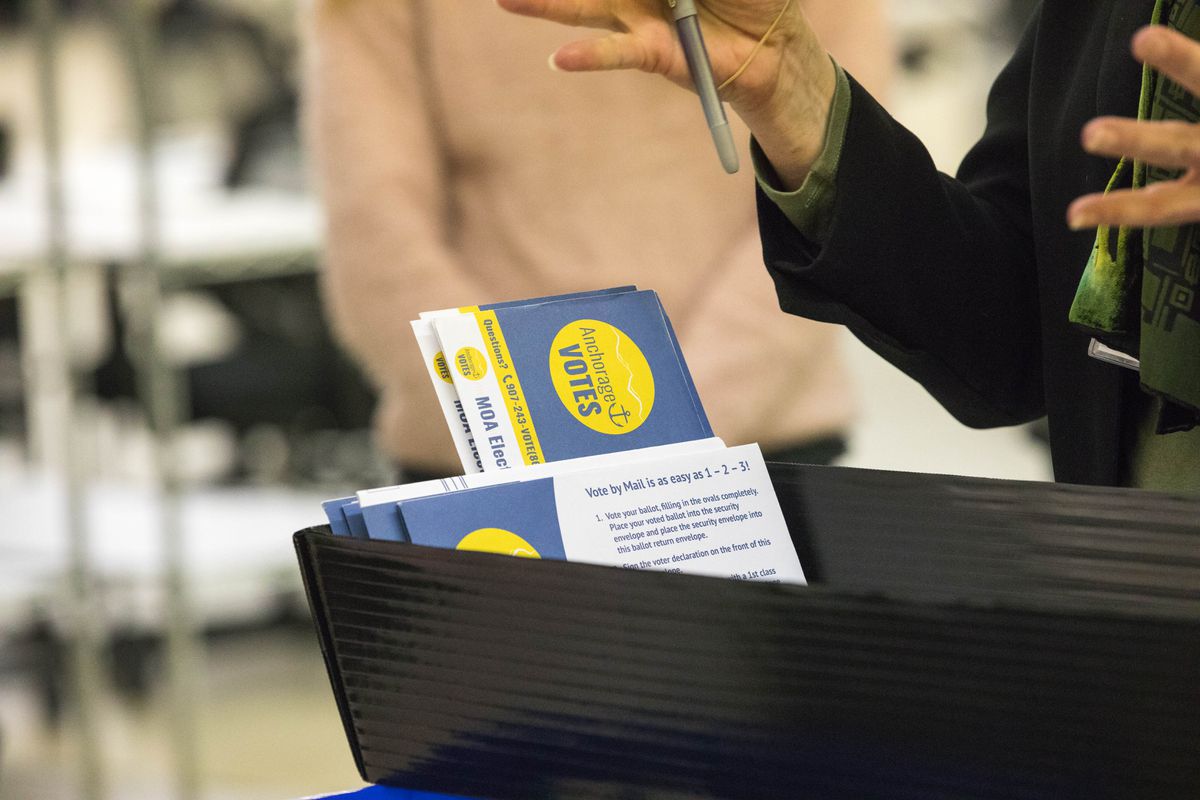 A campaign video where a candidate whacks a would-be thief with her purse, tough talk on crime and big alcohol industry spending against a potential tax are a few highlights of the Anchorage city election as voting begins.

On March 12, the city mailed ballots to thousands of registered Anchorage voters. This is the second year the local election has been held primarily by mail. The last day to vote is April 2, election day.

Some campaigns planned to blitz voters with advertisements just as ballots are hitting mailboxes. A second surge will likely come closer to election day, to catch last-minute voters.

Five Anchorage Assembly races are underway. Two Anchorage School Board seats are up for grabs.

Voters will also decide whether to back a 5 percent alcohol tax proposed by the administration of Mayor Ethan Berkowitz. If it passes, Anchorage would join 11 other communities in the state that tax alcohol, including Bethel, Dillingham, the city and borough of Fairbanks, Juneau and Utqiagvik.

[21 questions with this year’s candidates for Anchorage Assembly]

The measure says the money can only be used for “alcohol and substance misuse prevention and treatment, community behavioral health programs, public safety, and homelessness prevention and response, including abatement of prohibited campsites.”

Of all the issues on the Anchorage ballot this spring, the alcohol tax has attracted the most controversy and advertising money.

The alcohol industry, through an independent expenditure group called Alaskans Against Unfair Alcohol Taxes, has raised more than $138,000 to fight the tax, according to the latest campaign finance reports. About half the donations came from the Alaska Beer Wine and Spirits Wholesalers Association, a nonprofit registered to the Odom Corp., a Washington-based beverage distributor.

One online ad produced by the group reflected skepticism the money would be used properly. It also pointed to problems with homelessness in Seattle, a city that spends more than $1 billion annually on the issue. The ad references an article in City Journal, a Seattle magazine, that criticized the city for lacking accountability in how it was paying to fight homelessness.

“The mayor’s alcohol tax -- more $$ for government. Seattle did the same thing -- a billion dollars a year in tax money. Homelessness got WORSE -- drug use got WORSE. Vote no on Prop. 9,” the online ad reads.

Darwin Biwer, the longtime owner of the downtown bar Darwin’s Theory, mailed a highlighter-yellow leaflet to households that suggested the Assembly could raise the tax rate at any time. He pilloried the measure as a “blank check” to the city.

Bill Falsey, the city manager, said the Assembly would have no legal way of raising the tax at any time. The city would have to go back to voters to do that, Falsey said. The Assembly could, if necessary, go back later and adopt provisions related to mechanical issues, like collections, tax returns and refunds, Falsey said.

The pro-tax campaign plans to stress the uses of the tax money in the coming weeks, said Nora Morse, the director of an independent expenditure group supporting the tax

“Issues like homelessness, the increase in property crime, the lack of mental health and detox beds -- everyone is being impacted by that,” Morse said. “This is a solution to those problems.”

While far behind in spending, the pro-tax campaign has at least one big industry ally: Brown Jug, the state’s largest retailer. Officials with Brown Jug’s parent company, Alberta-based Alcanna Inc., have come out supporting the tax. The company recently made a $10,000 donation to the pro-tax campaign, Morse said. Other major contributors include police and firefighter unions and Recover Alaska, an Alaska-based nonprofit that works to curb excessive drinking.

Advocates say the money could pay for a proposed alcohol treatment center in West Anchorage at the former Clitheroe site, illegal camp clean-ups or an expansion of a team of social workers, firefighters and police that tries to proactively help people on the street. They also plan to emphasize research calculating the cost of alcohol abuse. One study, in the American Journal of Public Health, shows heavy drinkers and young people drank less after taxes took effect between 1983 and 2002, according to Tiffany Hall, the executive director of Recover Alaska.

Comparisons to Seattle, meanwhile, are unfair, Morse said. She said the scale of homelessness in Seattle is different from Anchorage.

The Assembly would decide where the money would go as part of the budget process, and the city would be required to report on how it was spent. Opponents say a new tax isn’t necessary and the city should lobby for state alcohol tax money.

Assembly and School Board races heat up

Vasquez released a Facebook video earlier this month that showed her walking at the University Lake dog park in Midtown when a man (an actor) snatches her purse, shouting, “Give me your purse, Grandma!” Vazquez chases him down, pulls back the purse and whacks him with it. He falls down and dramatically rolls.

[20 questions for this year’s candidates for Anchorage School Board]

At that point, Vazquez puts her foot on his back.

“Unlike my opponent, I will put my foot down on crime!” Vazquez said, looking into the camera. “The crime wave is way out of control.”

In an interview, Vazquez, an attorney and former assistant attorney general, said she hoped the “lighthearted” video would offset her reputation for being serious, while highlighting her main campaign issue. She has campaigned on her plans to ask the state to do away with Senate Bill 91, the state’s contentious attempt at criminal justice reform.

Vazquez is a familiar face. She served in the Alaska House of Representatives before losing her seat to Jason Grenn in 2016. She ran again for state House in a Republican primary in 2018, but lost to Sara Rasmussen.

Her opponent, Kameron Perez-Verdia, has also held public office before, as the president of the Anchorage School Board. As of the latest campaign finance reports, Perez-Verdia was well ahead in fundraising, bringing in more than $50,000 to Vazquez’s $13,100. Fundraising doesn’t predict winners, but it does suggest who may have an advantage in messaging and reaching voters.

Perez-Verdia said his top focus is also crime and public safety, but from a broader perspective.

“Making sure we have a safe Anchorage both has to do with ensuring we have enough police on our streets but also means we are address some of the root challenges people are facing, like mental health and poverty and prison re-entry,” Perez-Verdia said.

In Chugiak-Eagle River, voters will choose between newcomer Oliver Schiess and former school board and legislative aide Crystal Kennedy. Kennedy, who was on top in fundraising, is running on her experience in public service and ties to local conservative leaders. Schiess says he’ll bring a fresh perspective to the Assembly and says politicians should spend more time listening to and engaging with the public.

Over in Midtown Anchorage, an attorney and two auctioneers were duking it out to replace veteran Assemblyman Dick Traini.

Meg Zaletel, an attorney and the director of Anchorage Community House, had raised about $31,000 as of early March. Zaletel has sought to cast herself as a moderate who wants to tackle crime. She said Friday that she’d knocked on close to 2,000 doors and visited nearly all the community councils in the district.

Her leading opponent, Christine Hill, had raised about $20,000 in the same time period. In one video posted on Facebook, Hill’s husband, Duane, collects votes for her, auctioneer-style.

Ron Alleva, the longtime owner of Grubstake Auction Co., has run for office numerous times over the years. His business is located next to the soup kitchen Bean’s Cafe and Brother Francis Shelter, the emergency homeless shelter. Alleva has long been a strong critic of social services and homelessness policy.

Alleva is also currently facing misdemeanor criminal charges, accused of pouring potentially toxic chemicals near the social services agencies. Alleva maintains he did nothing wrong. His trial is scheduled for the third week of April, though Alleva’s attorney, Paul Nangle, said he was working to get the charges dismissed.

In the race for School Board Seat A, Kai Binkley-Sims, a former BP engineer and a part-owner of the Anchorage Daily News, had raised $45,000 for her campaign as of early March. On her social media page, Sims highlighted support from U.S. Sen. Dan Sullivan and his wife Julie Fate, and her efforts to make campaign sign frames out of recycled hockey boards. Binkley-Sims has been pitching herself as a political newcomer focused on efficiency.

Her opponent, Margo Bellamy, had raised about $24,000 and highlighted her extensive experience working for the Anchorage School District. Bellamy has been making rounds at community councils, and one campaign video shows her shooting hoops with kids at a local gym.

A quieter race, in terms of fundraising, was underway for School Board Seat B, where incumbent Starr Marsett is being challenged by David Nees. Marsett had raised just about $8,000, and Nees had raised about $1,500, mostly his own money and resources.

Marsett is running on her plans to fight state budget cuts, while Nees, who has run often for public office but not yet been elected, has presented himself as a fiscal hawk critical of Marsett’s record.

The Anchorage Daily News asked candidates for the April 2 election to the Anchorage Assembly and School Board to answer a series of questions on issues facing those bodies. We’re publishing select responses daily. The answers were fact-checked when facts were cited and edited for spelling, grammar and clarity. To see all the Assembly candidates’ answers, click here. For School Board candidate surveys, click here.