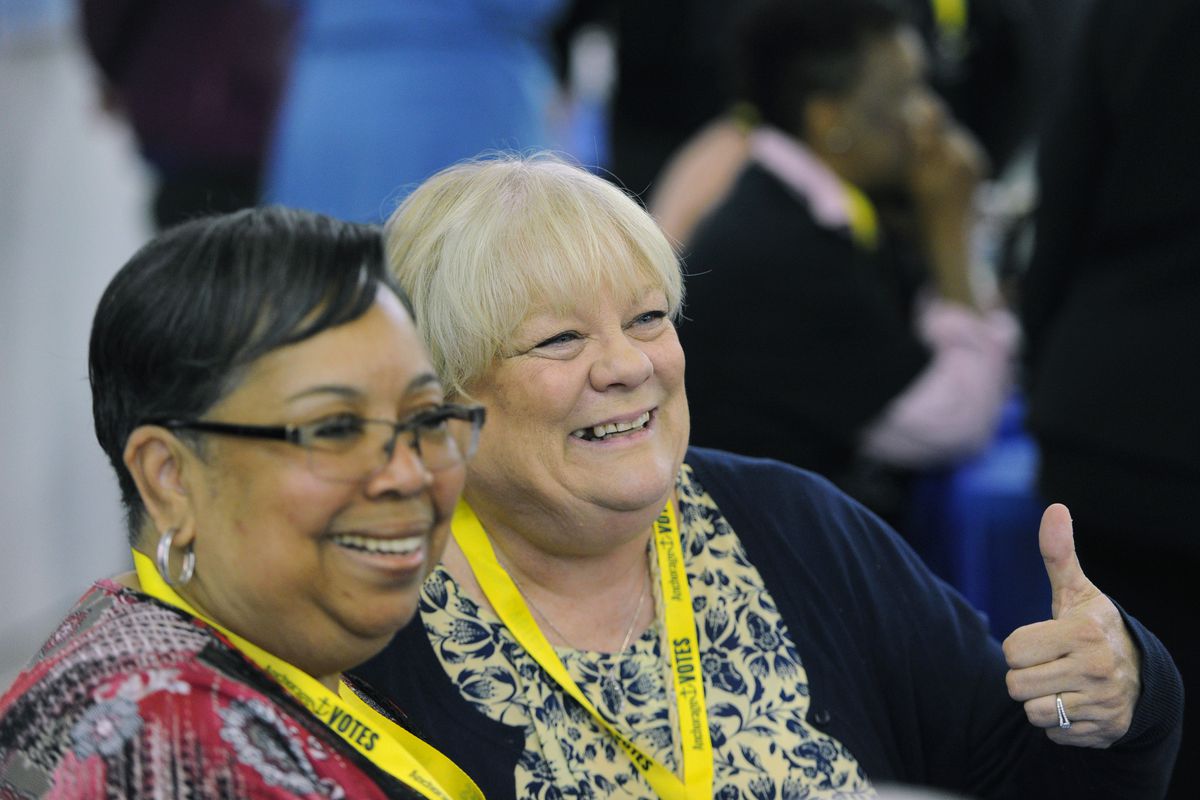 School Board candidate Margo Bellamy and School Board president Starr Marsett, who was up for reelection, pose for a photo at Election Central after the polls closed on Election Day, April 2, 2019. (Bill Roth / ADN)

School Board candidate Margo Bellamy and School Board president Starr Marsett, who was up for reelection, pose for a photo at Election Central after the polls closed on Election Day, April 2, 2019. (Bill Roth / ADN)

Political newcomer Margo Bellamy and incumbent Starr Marsett were leading Tuesday night in their races for Anchorage School Board, according to the first batch of election results.

There were nearly 43,000 ballots counted Tuesday in Anchorage’s second vote-by-mail election. About 10,000 ballots had been received by election officials but not yet counted. The overall turnout rate was so far about 19 percent.

An unknown number of ballots were also in the mail, or gathered from drop boxes and at accessible vote centers later in the day Tuesday. Those ballots likely number in the thousands, officials said.

Updated results will be posted on Wednesday, after more votes are counted, officials said.

The two winning Anchorage School Board candidates will join the seven-member governing body of the state’s largest school district at a time when Republican Gov. Mike Dunleavy has proposed significant cuts to education funding. The school board approves the Anchorage School District’s annual budget.

On Tuesday night, Bellamy was out in front of opponent Kai Binkley Sims in the race for School Board Seat A. Bellamy, a veteran educator, had 20,732 votes, or 55 percent of the vote, and Binkley Sims, an engineer and part-owner of several businesses, including the Anchorage Daily News, had 16,951, or 45 percent.

“I feel good,” Bellamy said Tuesday night while surrounded by supporters at the city’s election headquarters. “I ran a good campaign. I have an excellent team. I think my message was clear and focused on kids and learning and the people that serve them.”

The winning candidate will fill the board seat once held by Bettye Davis, who died in December 2018.

In the race for School Board Seat B, Marsett was leading retired math teacher David Nees. Marsett, a real estate agent, is the current school board president who’s seeking a second term. Nees has often run for public office in the past decade but has not yet been elected.

Marsett said she was feeling “optimistic” Tuesday night. When she saw the first batch of results, she said, “I was shaking a little bit.”

“Excited of course. I really didn’t know how this would go,” Marsett said at the election headquarters.

School board members are elected to three-year terms in area-wide, nonpartisan races, though candidates sometimes choose to display party connections.

This year’s school board races drew an unusual amount of advertising spending.

Binkley Sims raised nearly $60,000 for her campaign from a wide range of donors, according to disclosure reports. Bellamy raised about $45,000. Most school board campaigns don’t come close to $50,000.

In response to the GOPAC spending, an independent expenditure group chaired by the leaders of the Alaska AFL-CIO — the largest labor organization in the state — and funded largely by the Anchorage teacher’s union started running about $7,500 in ads supporting Marsett and Bellamy. Former U.S. Sen. Mark Begich, a Democrat, and his wife, Deborah Bonito, each gave $1,000 to the campaign.

Some voters also received text messages: One said it was from Casey Steinau, the chair of the Alaska Democratic Party, and encouraged votes for Bellamy and Marsett. Another advocated a vote for Binkley Sims and included a link to her campaign website.

Also by Tuesday night, a $59.1 million school bond package was passing with 59 percent of voters approving it. The bond package would pay for roof replacements, earthquake repairs and other projects within the Anchorage School District.

The school district has estimated the bond would cost taxpayers an additional $7.53 per $100,000 of assessed property value.