Another whale has been found dead in Turnagain Arm 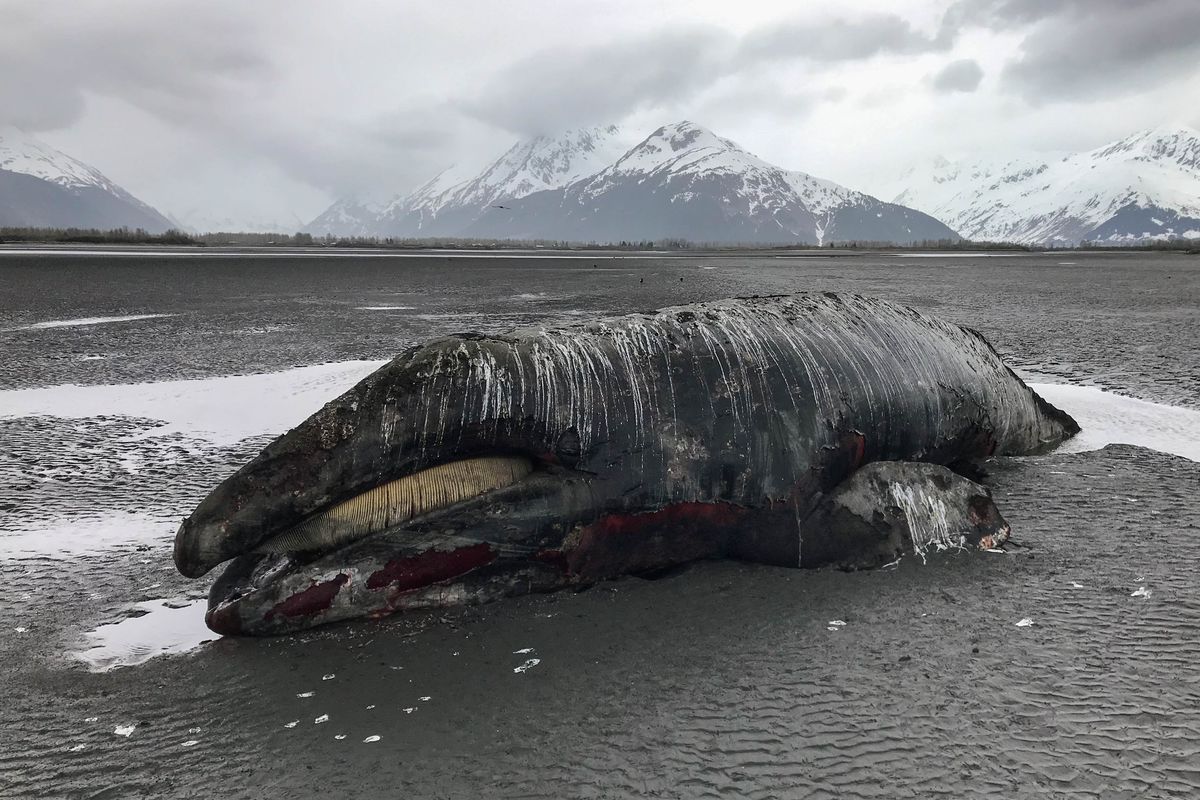 A gray whale carcass lies at the head of Turnagain Arm on Wednesday, May 15, 2019. The whale was first reported to NOAA by a pilot on May 9. (Bill Roth / ADN)

A gray whale carcass lies at the head of Turnagain Arm on Wednesday, May 15, 2019. The whale was first reported to NOAA by a pilot on May 9. (Bill Roth / ADN)

Scientists on Wednesday were monitoring a dead gray whale stuck in the mudflats south of Girdwood.

It’s the second whale found dead in Turnagain Arm within two weeks, and among dozens that have washed up dead along North America’s West Coast this year.

The first dead whale found in Turnagain Arm, a young, female humpback, likely died from stress after it had become beached at least twice in the area in late April, said Barbara Mahoney, acting stranding coordinator for National Oceanic and Atmospheric Administration Fisheries in Alaska.

What caused the gray whale’s death remains unknown. Tides and quicksand-like mudflats prevented scientists from performing a necropsy, Mahoney said. Because of that, little else is known about the animal, including its weight and whether it’s male or female.

Typically, gray whales can grow up to about 49 feet long and weigh about 90,000 pounds.

A pilot first reported spotting the gray whale in Turnagain Arm last Thursday, Mahoney said. It lay in shallow waters near where Turnagain Arm meets the Placer River, off about Mile 78 of the Seward Highway, and it wasn’t moving, the pilot told NOAA.

That’s the same area where the massive whale remained nearly a week later, anchored in the mudflats at low tide Wednesday and surrounded by ravens.

It’s unusual to find big whales, whether a gray whale or humpback, in Turnagain Arm, a waterway known for its swift tides, narrow channels and shallow waters.

In fact, gray whales are rarely spotted in Cook Inlet at all, Mahoney said.

Each year, the eastern North Pacific gray whales make their way from Mexico to Alaska during one of the longest migrations of any mammal. They travel about 5,000 miles each way, according to NOAA.

The whales begin moving north from late February to May, hugging the coast of North America. They usually enter the Bering Sea in April or May, and continue along the coast of Bristol Bay, arriving near St. Lawrence Island in May or June, according to the Alaska Department of Fish and Game.

Most of the whales spend their summer feeding in the Bering and Chukchi seas before swimming south again in mid-October.

By Wednesday, NOAA had gotten reports of gray whales off the coasts of Kodiak, Seward and north of Nome, Mahoney said.

It’s unknown why a migrating gray whale would divert up Cook Inlet and make it all the way to Turnagain Arm, Mahoney said.

Gray whales primarily feed on the bottom of the ocean, scooping up sediment and catching tiny invertebrates, so it’s very unlikely the whale chased fish up Cook Inlet, she said.

It’s possible the whale just swam into Turnagain Arm with the tide, she said, and then got stuck. Gray whales don’t have echolocation capabilities like beluga whales, making it more difficult for them to navigate the silty waters and narrow channels, she said.

This is the fourth gray whale stranding in Turnagain Arm in 20 years, Mahoney said. The previous standings happened in 2003, 2005 and 2010.

NOAA was also monitoring a dead gray whale floating near Egg Islands, south of Cordova, on Wednesday, she said. That’s a more common location for the whales. Scientists hoped that whale carcass would move closer to shore so they could possibly examine it and try to determine what led to its death, Mahoney said.

Gray whales have turned up dead across the U.S. West Coast this year in exceptionally high numbers, according to data from NOAA Fisheries’ West Coast Marine Mammal Stranding Network.

Last year, there were 45 gray whales found dead, 20 of them off Alaska, according to NOAA.

Experts say this year’s gray whale die-off is largely due to too little food for the marine mammals, according to news reports. Some of the whales have died from malnutrition and some from ship strikes.

The eastern North Pacific gray whale was removed from the federal endangered species list in 1994. The population is now around 27,000, according to NOAA.