A humpback whale died in Turnagain Arm. Here’s what might have happened. 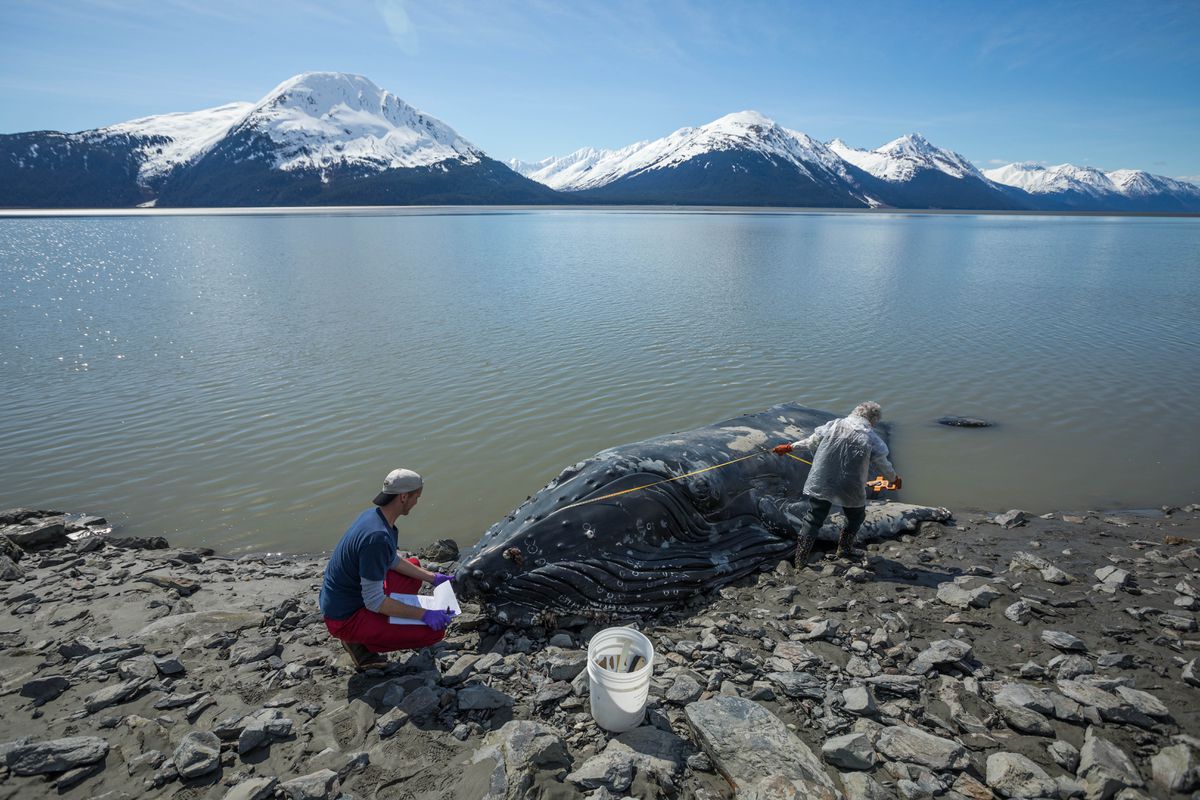 UAA grad student Greg Merrill helps Alaska Sealife Center Veterinarian Pam Tuomi measure a dead humpback whale on the shore of Turnagain Arm south of Girdwood on Tuesday, April 30, 2019. Tuomi and her team gathered samples, including blubber, blood, and the eyes, and will perform a necropsy to try to determine the cause of death. (Loren Holmes / ADN)

UAA grad student Greg Merrill helps Alaska Sealife Center Veterinarian Pam Tuomi measure a dead humpback whale on the shore of Turnagain Arm south of Girdwood on Tuesday, April 30, 2019. Tuomi and her team gathered samples, including blubber, blood, and the eyes, and will perform a necropsy to try to determine the cause of death. (Loren Holmes / ADN)

A young humpback whale was found dead Tuesday along Turnagain Arm, south of Girdwood, according to the National Oceanic and Atmospheric Administration. Biologists believe it’s the same whale that was stranded in the area at least twice earlier this week.

A necropsy was underway Tuesday to learn more about the stranded whale, including any clues about its cause of death.

“There are no visible wounds on the animal and it seems like, on the surface, it’s healthy,” said Verena Gill, a marine mammal specialist with NOAA.

Gill said she suspects the whale grew stressed in the unfamiliar Turnagain Arm and that contributed to its death. Turnagain Arm, a waterway known for its swift tides, narrow channels and shallow waters, isn’t a friendly environment for big whales, she said.

“You have to really have an intimate knowledge of that system to know where the deep channels are,” she said. “It’s easy to get lost.”

Gill described the humpback whale as a juvenile that measured roughly 30 feet long.

It was unknown Tuesday whether the whale was male or female and how much it weighed. It was also unknown what prompted the whale to swim up Cook Inlet.

“We’re not sure why it came this far up,” said NOAA biologist Barbara Mahoney. “Was it following a hooligan run? Was it just kind of lost?”

It’s possible the whale entered Turnagain Arm during high tide, Mahoney said, “and then all of a sudden the tide leaves and you find yourself boxed in.”

Caption
Alaska Sealife Center Veterinarian Pam Tuomi extracts an eye from a dead humpback whale on the shore of Turnagain Arm south of Girdwood on Tuesday, April 30, 2019. Tuomi and her team gathered samples from the whale with the hope of determining the cause of death. (Loren Holmes / ADN)
Wait 1 second to continue.

The whale was found dead Tuesday on the rocky shores near Mile 86 of the Seward Highway.

It was secured with rope to the guardrail so it wouldn’t float away with the changing tides.

A team, led by Pam Tuomi with the Alaska SeaLife Center, collected fluid and blood samples from the whale late Tuesday afternoon. Slices of blubber were also removed for testing as a crowd of spectators grew.

Gill said it could be months before there’s a definitive cause of death.

Julie Speegle, a spokeswoman for NOAA, said the necropsy would continue Wednesday. She asked spectators to stay at least 30 feet away from the whale.

“Responders will be using long knives to cut into the whale, and there will be a number of knives being carried around the whale for knife sharpening purposes,” Speegle wrote in an email. “We don’t want responders to be distracted during these operations.”

Speegle also wrote that the Marine Mammal Protection Act prohibits people from collecting any “soft parts” from the dead humpback whale such as baleen, skin and tissue unless NOAA Fisheries permits the removal for scientific, educational or Alaska Native subsistence purposes.

“Unless NOAA Fisheries determines that this whale is from a population listed under the Endangered Species Act, the public can collect hard parts (bones) once the soft tissue has decomposed naturally,” she wrote.

In 2017, a dead humpback whale washed ashore at Kincaid Park in Anchorage and drew groups of onlookers. NOAA officials warned that marine mammals can transmit disease to humans and pets, and they asked people to keep their distance from the carcass.

In 2016, the carcass of a humpback whale originally discovered along Turnagain Arm near Hope also washed ashore at Kincaid Park.