The Paradise Inn is set to be torn down. But first, a medium came in to ease the troubled hotel’s bad vibes. 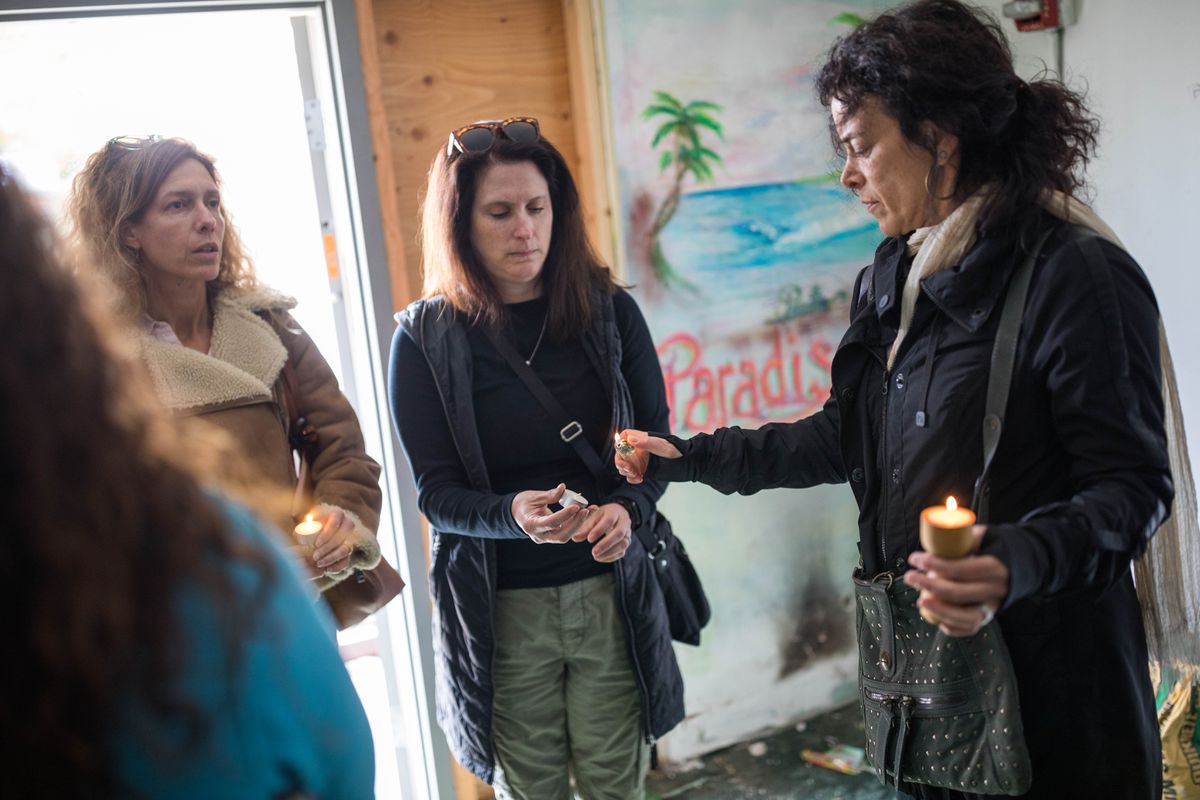 Cindy Berger lights a candle for her friend Julie Wrigley before the group, led by medium Polly Wirum, walked through the former Paradise Inn Friday, May 17, 2019 to "clear stagnant energy and bring in free-flowing energy." Berger recently purchased the now-derelict building and plans to turn the land into a parking lot, but after someone told her that a spirit was occupying the space, she decided to enlist the help of a medium. (Loren Holmes / ADN)

Cindy Berger lights a candle for her friend Julie Wrigley before the group, led by medium Polly Wirum, walked through the former Paradise Inn Friday, May 17, 2019 to "clear stagnant energy and bring in free-flowing energy." Berger recently purchased the now-derelict building and plans to turn the land into a parking lot, but after someone told her that a spirit was occupying the space, she decided to enlist the help of a medium. (Loren Holmes / ADN)

Before tearing down the old Paradise Inn in Anchorage’s Spenard neighborhood to build a parking lot in its place, the owner, Cindy Berger, discovered something else may need to be abated first: a spirit in the basement.

It’s not hard to feel the building’s bad vibes. The inn has a long, colorful history, built in a trendy Polynesian-themed “tiki” style in 1962 at a time when Spenard seemed to be emerging as an extension of downtown. Over the past two decades, though, the place devolved into a hot spot for prostitution, crime, drugs and violence. It was finally shuttered in 2017 when the federal government took possession after a drug case. (And with it, the iconic green neon palm tree out front.)

Now, the inn is faded and boarded up. People tend to loiter in the parking lot and drink. Earlier this month, someone mentioned to Berger that it felt like a spirit was stuck in the inn’s basement. And she got to thinking about it.

“I thought that if that’s true — and why wouldn’t I choose to believe it’s possibly true, because a lot of weird stuff happened in this building for a long time — that I better call a medium,” Berger said.

Berger is a lawyer who now runs a real estate company; her husband, Rod Hancock, co-owns Bear Tooth Theatrepub and Moose’s Tooth Pub and Pizzeria. They are among a group of neighborhood investors looking to remake the Spenard area. Berger owns a building on an adjacent lot to the Paradise Inn and bought the inn last fall in hopes of saving it, but it soon became clear the building’s condition was too poor. She says the inn will likely be demolished this summer. Once she builds the parking lot, she wants to create a mural on a concrete firewall that will remain.

She isn’t all that spiritual, she said, but she had been feeling apprehensive because it’s a big project. She decided that if there was a spirit stuck within the inn, she better call someone who deals with that sort of thing professionally.

“And I better get this person removed from the building, because I wouldn’t want him to spend eternity dug beneath the basement of a gravel parking lot in Spenard. That’s not an eternity I want for anybody, right?”

So she contacted Polly Wirum, a former neighbor of hers who now works as a medium and spiritual life coach. On a recent Friday morning, Wirum, Berger, Hancock and a few other friends stood in a circle in the parking lot next to the boarded-up inn.

Wirum, who was holding a sea-salt-and-ginger-scented candle, asked the group to set positive intentions.

“What we’re really going to focus on today is like a healing, not just for this building but for each of us, the building, and the community,” Wirum told them.

The group stepped around empty vodka bottles and trash and filed into the front door. In the dark entryway, they circled up on the dirty linoleum floor and lit candles. A door ahead led to a decaying bar and dance floor area. To the left, a stairwell led to the basement and a warren of empty rooms.

Wirum closed her eyes. It didn’t feel too bad in there, she said. She said she didn’t sense one particular spirit but many.

Berger should mainly take care to celebrate the land beneath the building, Wirum said. Otherwise, she said she didn’t think Berger would have trouble with the development.

“Everything is smooth sailing if you honor the ground.”

The group walked through the basement afterward. After they came out, several people agreed the atmosphere felt better and lighter. Berger had been sad when she walked inside the Paradise Inn because she couldn’t save it, she said. But Wirum’s words brought her some relief.

“She did alleviate some of my fears about creating negative energy, if I were to tear the building down," Berger said.