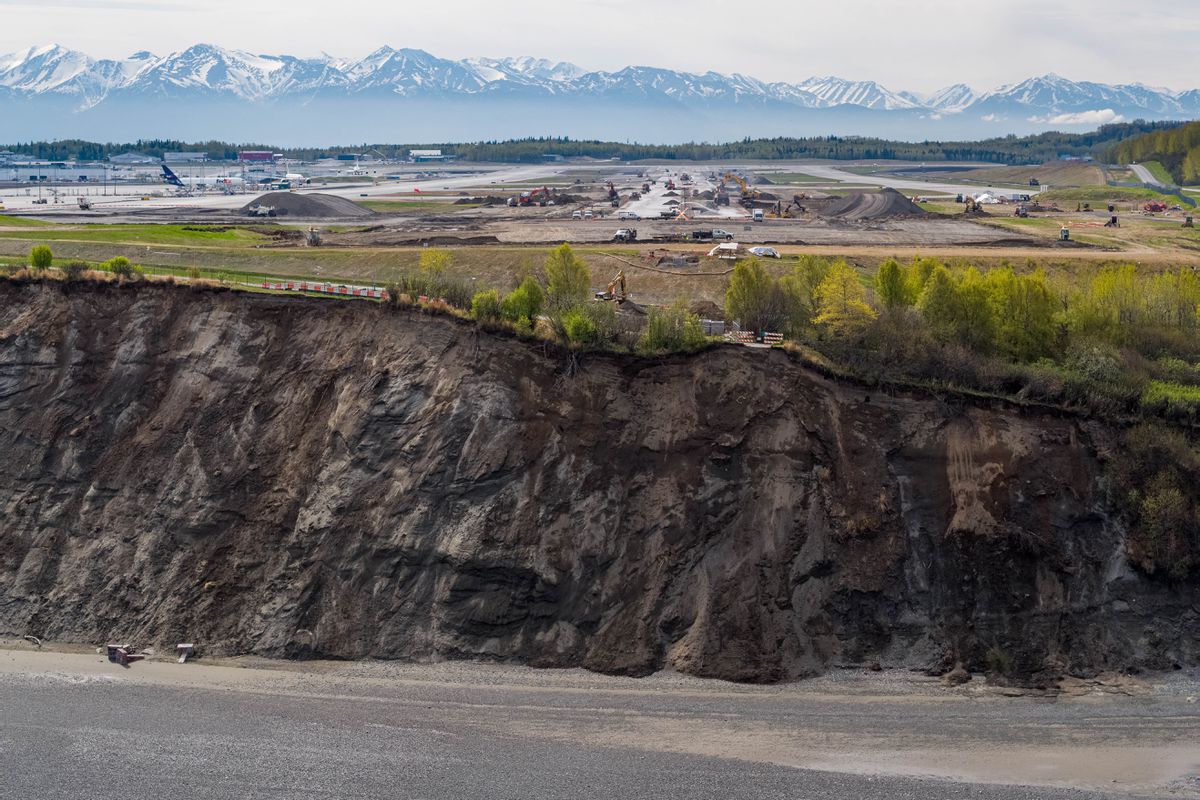 The eroding bluff is seen in front of the north-south runway at Ted Stevens Anchorage International Airport on Tuesday, May 14, 2019. The bluff has been eroding for many years and is encroaching on the popular Tony Knowles Coastal Trail and nearby road. The Ted Stevens Anchorage International Airport, behind, is expanding the runway and adding additional navigation lights. (Loren Holmes / ADN)

The eroding bluff is seen in front of the north-south runway at Ted Stevens Anchorage International Airport on Tuesday, May 14, 2019. The bluff has been eroding for many years and is encroaching on the popular Tony Knowles Coastal Trail and nearby road. The Ted Stevens Anchorage International Airport, behind, is expanding the runway and adding additional navigation lights. (Loren Holmes / ADN)

The bluff at Anchorage’s Point Woronzof, which is near a scenic bike trail, road and international airport runway, has eroded to the point of making public officials nervous. Federal officials say a fix is years away and needs to be studied.

But the bluff has already been the focus of extensive study by researchers at the University of Alaska Anchorage. The studies have found the bluff has eroded more than 150 feet over the past century, or an average of roughly 2 feet each year.

The erosion has grown worse in recent decades, researchers say, buffeted by earthquakes and large storms.

Most recently, students in the UAA Geomatics Department used photographic technology to create 3-D models that show hot spots on a section of the bluff, which looms over a beach on the eastern shore of the upper Cook Inlet.

It was a demonstration of budding technology that allows surveyors to build detailed 3-D models from photographs. The technology is emerging as a key tool in researching erosion, which actively threatens coastal communities in western and northern Alaska.

The data can also serve as the groundwork for government fixes at Point Woronzof, researchers said.

Erosion at Point Woronzof has long been a point of concern. The erosion threatens 2,000 feet of the Coastal Trail system and greenbelt. Portions of the trail have already been relocated inland and fences have been installed in recent years.

Worried city officials placed barriers by yet another section of the bluff this spring, warning users of the Tony Knowles Coastal Trail to stay away.

The state of Alaska owns the land and is working with the Army Corps of Engineers on a fix. Army Corps officials said in May that a study would cost millions and a fix is about a decade away.

The city of Anchorage may be able to pursue some options sooner, such as engineering or trail rerouting, said Josh Durand, the city parks superintendent.

In 2018, the city-owned Anchorage Water and Wastewater Utility spent about $725,000 to protect a critical water tower on the beach below the bluff. Crews placed large rocks around the base of the tower to block erosion.

One recent study by two undergraduate geomatics students estimated that without any action, the erosion will be cutting directly into the existing Tony Knowles Coastal Trail in 40 years and the nearby stretch of Northern Lights Boulevard in 110 years. The airstrip could be at risk in 775 years, according to estimates in the report by Evan Venechuk and Brandon Hoxie.

Tom Ravens, a civil engineering professor at UAA who studies coastal erosion, started studying the bluff in the summer of 2008. The study included a beach monitoring program and models of wave activity in Cook Inlet. One student, Steven Brum, did his master’s thesis in civil engineering on the bluff.

The bluff has been monitored since at least 1909, when the United States Geological Survey started putting monuments on it, Ravens said. Over time, the monuments disappeared because of erosion.

Aerial photography taken since 1959 showed erosion was happening at a rate of 2 feet each year on average. Between 2006 and 2008, the erosion rate was significantly higher, at about 6 feet each year, Ravens said.

Ravens suspects Alaska’s ongoing climate change has played a role. Beach ice that protects coastal bluffs from waves has been retreating in many locations, including Point Woronzof, he said.

In the 2008 study, Ravens recommended a retaining wall for the bluff face to keep it from sloughing off.

The Army Corps of Engineers in Alaska considered an erosion study at Point Woronzof in 2015 but decided it wouldn’t work out financially under an existing erosion control budget, officials said. The agency has since asked for a bigger budget to cover a three-year study and future repairs.

The study, which would cost about $3 million, would likely come up with an erosion rate and compare different options for fixes, Cindy Upah, the chief of planning and public works at the Army Corps in Alaska, said in a May interview.

Even a decade ago, Ravens said, it seemed fixes should be made sooner than later.

“If you let it slide, you’re basically putting the Coastal Trail, the greenbelt, the road and the airport all at risk,” Ravens said.

In a statement, Bruce Sexauer, chief of the civil works branch at the Army Corps of Engineers, said the Corps was aware of the issues and hoped to get money for a study through the federal budget process.

Once the study was funded, one of the first steps would be to gather information that’s already out there and find what data is missing, Sexauer said.

“We welcome the identification of these existing data sets, but would not be able to do any detailed coordination or collaboration until a study is funded,” Sexauer added in the statement.

Beginning in 2016, Gienko took teams of students to the beach below the bluff for more than a week at a time. Each day, the teams snapped 200 photos.

Venechuk, 27, and Hoxie, 25, were among the undergraduate students who tromped out to the bluff to do laser scanning. They liked working outside, and the erosion clearly affected the community, they said. They decided to work together on Point Woronzof erosion for their senior project. One of Gienko’s students before them, Aleksey Voloshin, had also processed erosion data from the bluff.

Venechuk and Hoxie asked a local aerial imaging company for aerial photography of Point Woronzof and got records dating back to 1950.

From surveying measurements and photographs, the students built models showing that between 1909 and 2018, the bluff shrank back by 162 feet.

Some decades saw more or less erosion than others. Earthquakes can throw off the erosion cycle and worsen it. In 1964 and also in 2018, major earthquakes pushed the bluff forward and deposited more material than had eroded away, the analysis found.

The historic photos also showed that concrete blocks used to sit on top of the bluff but slid down. Those blocks now sit on the beach, coated in graffiti.

For their project, Venechuk and Hoxie analyzed a small segment of the bluff. They describe the bluff as “breathing”: Different spots were eroding faster than others.

Their findings included where the biggest hot spots might be, which could be prioritized in a future fix.

Venechuk and Hoxie both now work for the same small private Anchorage surveying company. They said their research can help lay groundwork for further study. They had time constraints, and more analysis should be done of the soil and weather at the bluff, Venechuk said.

Gienko, their professor, said he was happy to share the data gathered since 2016 with government agencies. The 3-D mapping technology is easy, fast, convenient and relatively inexpensive, he said.

All of the studies have showed an immediate threat to the city in terms of the path and road, and eventually the airport, Gienko said.

“We’ve been dragging our feet for so long, now we’re really forced to act,” said Ravens, the civil engineering professor.

Correction: An earlier version of this story misstated the time frame for a modeling project by Evan Venechuk and Brandon Hoxie. The model was based on measurements collected between 1909 and 2018, not 1918.