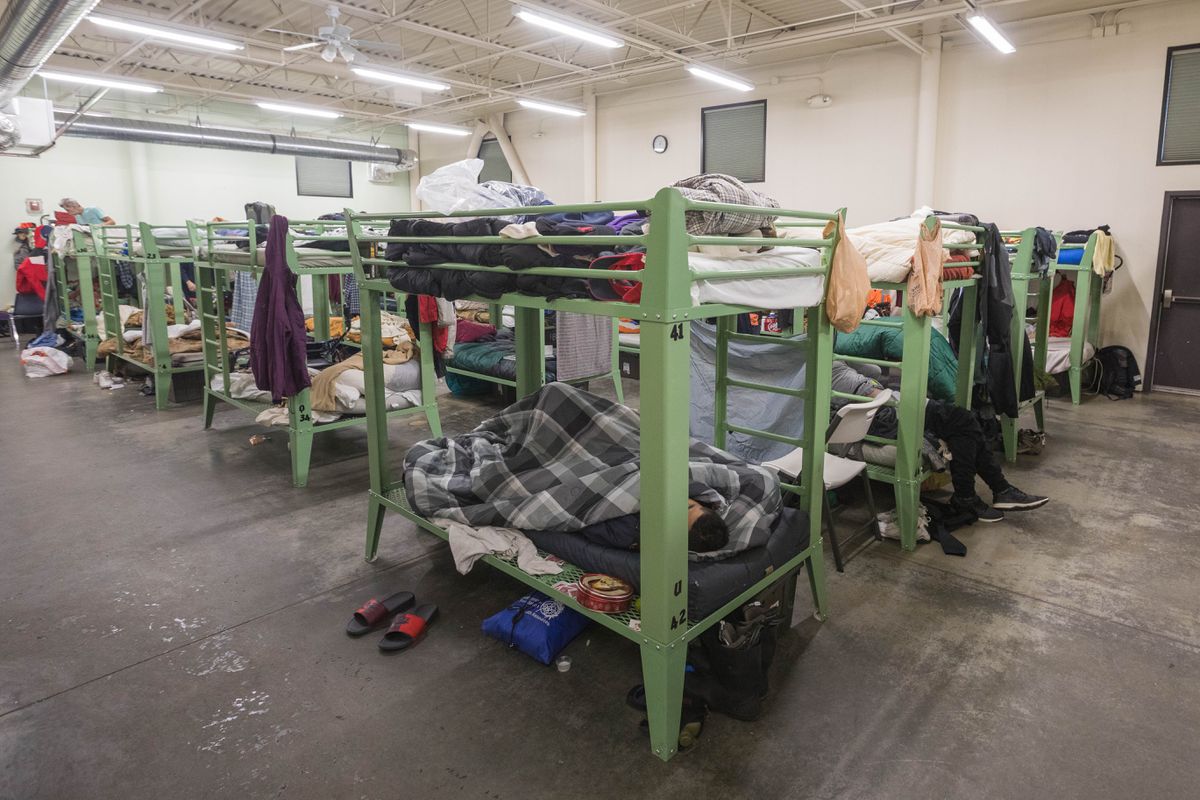 Among the casualties of Gov. Mike Dunleavy’s line-item budget vetoes Friday is most of the state’s contribution to homeless services, which will drastically reduce capacity at shelters, shrink programs for the hungry and eliminate several kinds of funding for low-income and supported housing, homeless advocates said.

Anchorage, which has the largest homeless population, loses the most.

Mayor Ethan Berkowitz, joined by officials from nonprofits that serve the homeless and low-income Alaskans, described the impacts of the cuts as “dire and horrific” at a press conference Saturday afternoon outside City Hall.

State support for homelessness services was reduced from $13.7 million to $2.6 million, said Jasmine Khan, executive director of the Anchorage Coalition to End Homelessness. There were also large reductions to Medicaid and programs that support seniors, the blind and the disabled, which will likely add to those needing help with housing and food. In Anchorage, the cuts mean reducing capacity at five out of its seven homeless shelters, she said.

Berkowitz said that to his knowledge, Dunleavy had not reached out to the organizations before the cuts.

“People should make policy decisions based on good information, addressing the people who are impacted, understanding what the experts have to say about the subject matter," Berkowitz said. “That was not the case with these cuts.”

The cuts are particularly discouraging as Anchorage has been making some modest progress toward moving people out of homeless encampments, which has been a priority for community members and businesses, Khan said. Reducing shelter beds in the city erases that progress and will make encampments and other kinds of visible homelessness worse, she said.

[Anchorage is doing more than ever to clear homeless camps. But to many, the problem has never been worse.]

When there are fewer homeless services and fewer shelter beds, it shifts the burden of caring for the homeless — from social service providers to law enforcement, jails and emergency rooms, which is ultimately more expensive to the public, she said.

Lisa Aquino, head of Catholic Social Services, said her organization lost funding for Brother Francis Shelter, Clare House and its housing service program, which helps get people who are homeless into permanent housing. Clare House, a shelter for women and children, may have to close during the day, she said.

“That means that, like, babies and little kids and moms don’t have a place to stay,” she said.

Between the reductions to Catholic Social Services’ programs and capacity alone, Aquino said, she expected homelessness in Anchorage to increase by 48% in the next year.

“You’re going to see it immediately,” she said.

Brother Francis Shelter will have to reduce its capacity from 240 to 100 people, she said, which will undoubtedly increase the number of people on Anchorage streets.

Aquino said she was unsure who will get priority for the shelter beds.

“Do you choose that frail older woman who uses a walker and doesn’t have anywhere else to go, or do you choose that young person who just got a job and just needs a place to stay for one more month?" she said. "Who do I turn out?”

Here’s a partial list of the Dunleavy line-item vetoes