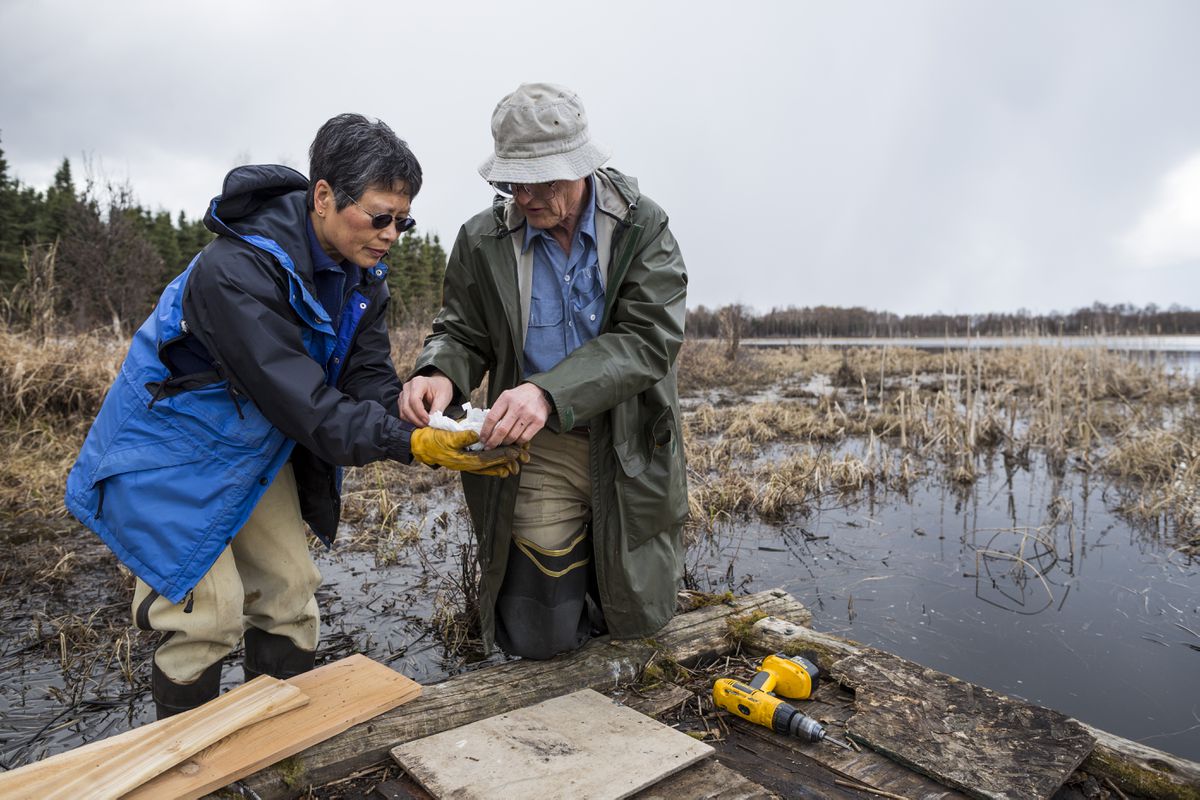 Scott Christy and Jean Tam were the kind of retired Anchorage couple who spent their time seeking the natural world anywhere they could find it, friends said.

They spearheaded a popular “loon cam” that allowed armchair naturalists to follow the travails of a pair of Pacific loons nesting on a Spenard lake.

When they wanted to really get away, they flew to their remote wilderness property near Resurrection Bay, where they’d constructed nest boxes for birds.

Tam, 69, and Christy, 73, died together on Friday when the plane Christy was piloting crashed into a mountain on the north side of Tern Lake on the Kenai Peninsula.

One passenger, a 29-year-old Virginia woman named Suzanne Glass, was also killed. Her friend and roommate Joy Cooper, 28, was critically injured, suffering broken bones and a collapsed lung, according to an online medical fundraiser.

On Sunday morning, the Alaska Mountain Rescue Group and an Alaska State Troopers helicopter removed the remains of the three victims from the site of the crash, near the junction of the Seward and Sterling Highways, according to trooper spokesman Ken Marsh.

Officials with the National Transportation Safety Board are still investigating how and why the plane struck the mountain Friday afternoon.

Thick smoke from the nearby Swan Lake wildfire has choked the air over the Kenai Peninsula for days, but officials have not said whether visibility was a factor in the crash.

The deaths of Christy and Tam represent a huge loss for the Anchorage birding community, said Mr. Whitekeys, an Anchorage entertainer who is also the president of the Anchorage Audubon Society.

“They were just totally exceptional people,” he said.

Tam had been on the board of the organization since the 1980s, he said.

The couple were true naturalists, fascinated with birds and plants and Alaska, said Mr. Whitekeys.

The pair owned a home near Connors Lake in Spenard where in 2003 they spearheaded an effort to install a popular “loon cam” so the public could observe a pair of Pacific loons that nested at the lake each summer. Schoolchildren, biologists and people sitting at their desks at work for years tuned in to watch the drama of the loons mating and nesting.

Each year Christy and Tam lugged an artificial nesting island they’d built to the center of the lake.

“It was the Cadillac of artificial nesting islands,” said friend Jeff Fair, a Palmer writer and ecologist who studies Pacific loons.

Tam was the tireless engine behind the loon cam program, said Mr. Whitekeys.

“She just made it happen,” he said.

Flying was a big part of the couple’s lives, friends said. They flew on extended trips to visit friends and family in the Lower 48, and also frequently to a piece of property they owned on Big Johnstone Lake, on a remote bay east of Resurrection Bay.

Christy was known as an experienced, meticulous pilot, said Fair.

He once asked Fair to act as a “bombardier” on a winter flight down to the wilderness property.

“I was supposed to sit up front with him and drop a bowling ball down,” before the plane landed, he said. The idea was to see how the bowling ball hit the ice on the lake: If it went through, the ice wasn’t thick enough to safely land. If it didn’t land and splashed up white, it meant snow and ice. If it splashed gray, that was a sign of treacherous lake overflow.

It’s not clear where Christy, Tam and their passengers were flying on Friday.

An online fundraising site for Cooper, the woman seriously injured in the crash, says that she and her roommate and friend were in Alaska on a trip together from Virginia. The fundraiser describes Cooper as living in the Dulles, Virginia, area and pursuing a master’s degree in aviation management.

Glass, the woman who was killed, had been working as a nanny for a family in Reston, Virginia, according to her LinkedIn page.

Fair said he’s still reckoning with the loss of his vibrant friends. He’s out of state right now, and his truck is parked at the couple’s house, a regular routine when he traveled out of state.

He’d brought them smoked fish and dark chocolate to say thank you.