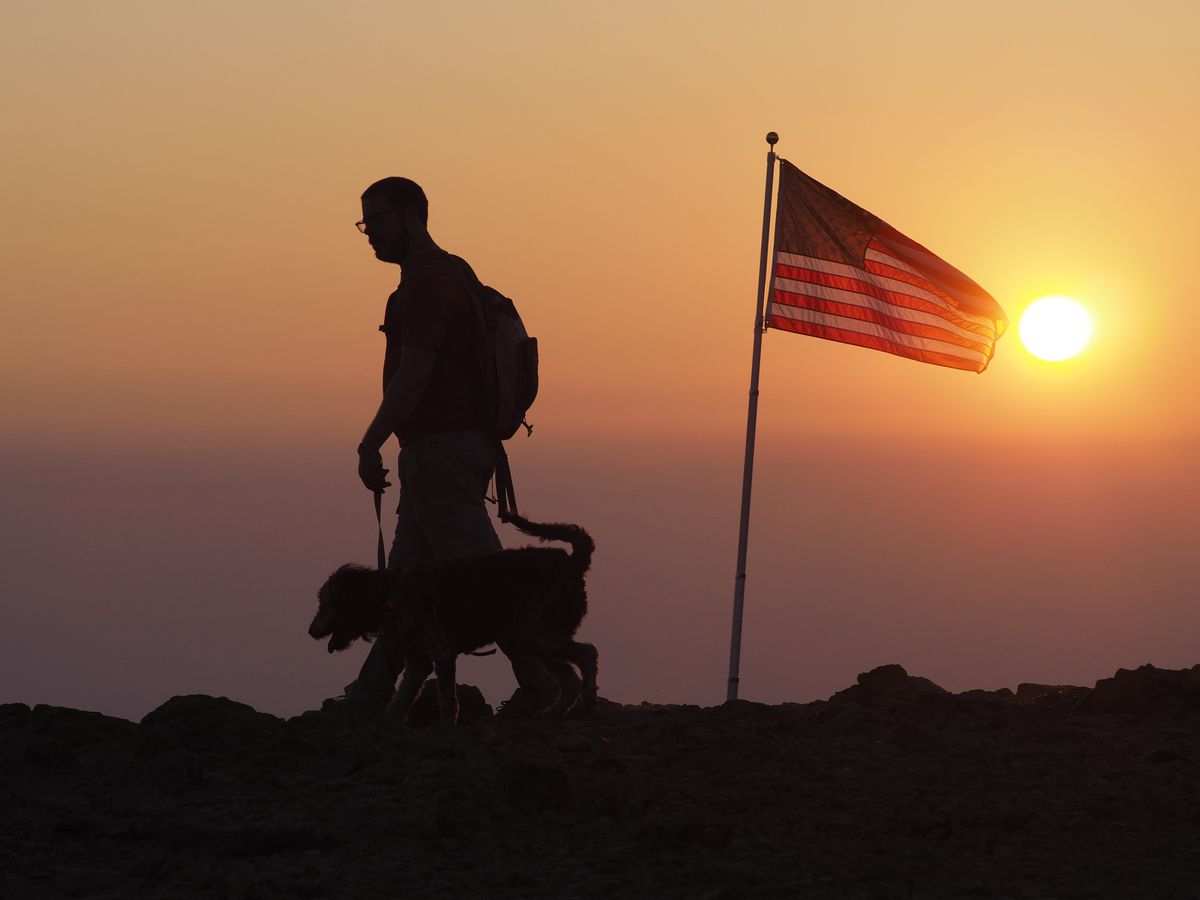 Kyle Mietzner, of Anchorage, and his dog, Daisy, begin their descent from Flattop Mountain in Chugach State Park late Friday, June 29, 2019. Smoke from the Swan Lake wildfire near Sterling has affected the air quality in Anchorage in recent days. (Marc Lester / ADN)

Kyle Mietzner, of Anchorage, and his dog, Daisy, begin their descent from Flattop Mountain in Chugach State Park late Friday, June 29, 2019. Smoke from the Swan Lake wildfire near Sterling has affected the air quality in Anchorage in recent days. (Marc Lester / ADN)

Update, 2 p.m. Saturday: The National Weather Service on Saturday issued a dense smoke advisory for Anchorage that will go into effect Sunday morning.

The advisory will last from 4 a.m. to 10 p.m. Sunday. The weather service cautions that visibility in the municipality may be reduced to less than a quarter of a mile at times due to smoke moving in from the Swan Lake wildfire, near Sterling.

“Smoke will move in over the area Saturday night, becoming more dense into Sunday morning,” the advisory reads. “Dense smoke will last through the day on Sunday before beginning to clear out Sunday evening.”

A dense smoke advisory is already in effect for Kenai Peninsula communities closer to the fire.

Original Friday story: As Anchorage braces for record or near-record heat this weekend, fire officials are weighing additional restrictions to protect against wildfire and mitigate the effects of fires that are already burning.

The Anchorage Fire Department on Friday banned outdoor portable fireplaces, which were previously allowed as long as they were elevated a foot off the ground with a spark arrestor, chimney stack or screen over the top.

Fire danger in Anchorage on Friday reached “very high” levels bordering on “extreme" as temperatures ratcheted up into the 80s. The high Saturday is expected to reach 85, matching a record set in 1969, according to the National Weather Service.

If the fire danger reaches “extreme," the fire department may ban all outdoor burning, Chief Jodie Hettrick said. That would mean barbecue grills and enclosed pellet grills would also be prohibited.

“Just the radiative heat from the barbecue could cause a problem,” Hettrick said.

The city already placed a ban earlier this week on open burning, meaning yard debris must be disposed of through curbside trash removal or taken to the transfer site or landfill.

The city is also prepared to cancel its Fourth of July fireworks shows in Anchorage and Eagle River if hot, dry conditions persist. That decision will be made sometime next week.

It would be one of many fireworks displays canceled throughout the state. The state fire marshal on Thursday suspended the use and sale of all fireworks in areas where fire danger is the highest.

It’s rare that fire danger reaches such high levels in Anchorage, according to Hettrick — she estimated it only happens every couple of years.

The greatest areas of concern are on the Hillside and the city’s green spaces, where trees and underbrush are the thickest. In those areas, fires can spread exponentially, Hettrick said.

“I want to remind people to be super cautious and be very vigilant about any heat source that could start a fire," Hettrick said.

The potential for a total burn ban depends largely on the city’s air quality, which has been hampered for several days by smoke from the Swan Lake fire near Sterling.

On Friday, the city issued an air quality health advisory cautioning those who are sensitive to smoke — children, older adults and people with respiratory or heart conditions — to stay indoors.

Healthy individuals aren’t immune from smoke irritation, though, especially if they participate in strenuous outdoor activities. Air quality in Anchorage on Friday bordered on “very unhealthy," according to the Alaska Air Quality Index.

Matt Stichick with the city of Anchorage’s Air Quality Program said the symptoms of smoke irritation begin with irritation to the eyes and throat.

More severe symptoms include difficulty breathing, shortness of breath and chest pain, he said. If that happens, Stichick said people should contact their health care provider.

Dr. Jeff Demain with the Allergy, Asthma and Immunology Center of Alaska in Anchorage warned that smoke can exacerbate the respiratory system’s inflammatory response.

“The patients that are at risk at (unhealthy for sensitive groups) level, are patients with COPD (chronic obstructive pulmonary disease), asthma and patients with lung cancer or other lung disease,” he said.

A group often overlooked but also at risk are patients with heart disease, Demain said. Because the respiratory system is getting less oxygen while inflamed, he warned that smoke inhalation “does increase the risk of cardiac events.”

For people sensitive to smoke, “I recommend staying indoors,” Demain said. He suggested using an air filtration system and closing doors and windows while indoors.

Throughout the city, outdoor recreation went on largely as planned Friday afternoon despite the smoke. An American Legion baseball tournament at Mulcahy Stadium went on as planned.

Dustin Slinker, owner of The Bait Shack on Ship Creek, said he didn’t think smoke was affecting people’s desire to fish, and there were “still a lot of people out and about.”

“You can definitely see the smoke," Slinker said from the north shore of the creek. "I can it see it looming.”

Correction: An earlier version of this story mistakenly said that barbecue grills and pellet grills had been prohibited. The Anchorage Fire Department banned portable outdoor fireplaces on Friday, not grills.