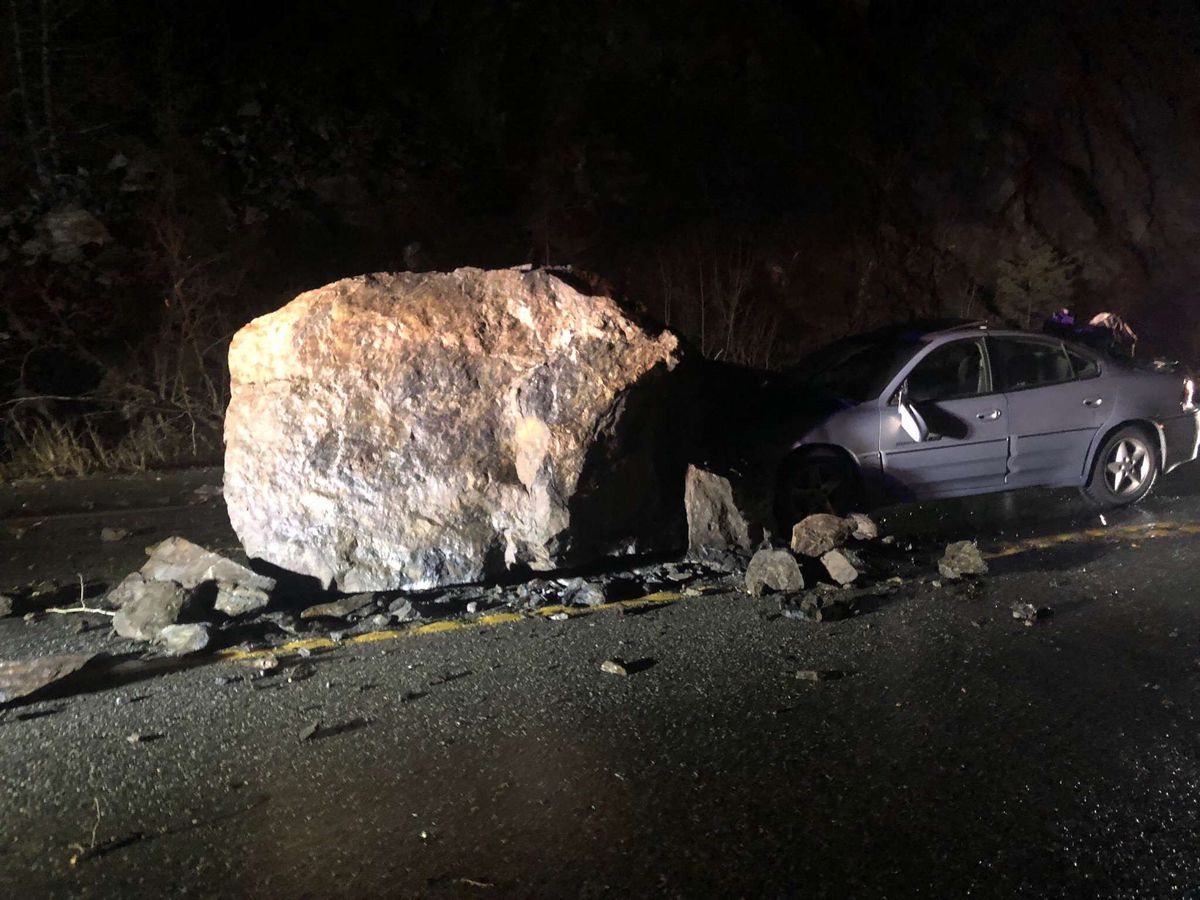 A car crashed into a 6-foot-by-8-foot rock near Beluga Point on Dec. 11, 2019. (Photo courtesy of Alaska Department of Transportation)

A car crashed into a 6-foot-by-8-foot rock near Beluga Point on Dec. 11, 2019. (Photo courtesy of Alaska Department of Transportation)

A car crashed into a “very large rock” — about 6 feet by 8 feet — that smacked the Seward Highway on Wednesday night along the same 5-mile stretch where rock slides temporarily shut down the road earlier this week.

Shannon McCarthy, a spokeswoman for the Alaska Department of Transportation, said officials believe the car struck the rock after it had fallen around 10:30 p.m. Wednesday in the northbound lane near Beluga Point, at Mile 110.5.

DOT workers were able to clear the rock and debris quickly because equipment was already on site to clean up debris from five rock slides Monday. The two people in the car were not injured and the car was towed from the area quickly, McCarthy said.

McCarthy said the rockfall could be related to recent freeze-thaw weather patterns but also may have been affected by two earthquakes that struck the region Wednesday.

On Monday, rocks and other landslide debris slid down the cliffs and covered the Seward Highway near Mile 111. Four more rock slides hit between miles 106 to 111 shortly afterward. One of the rocks was the size of a small car.

McCarthy said rock slides are more common during periods of high wind and rain. A wind gust of 113 mph was recorded Monday morning near McHugh Creek at Mile 113. Heavy rain pounded Turnagain Arm for much of the day.

DOT identified this portion of road as a problem area years ago, and McCarthy said officials are hoping to formulate a plan for emergency winter repairs within the next week. A major rock slide prevention project is slated to begin this summer. McCarthy said crews will bring down large rocks deemed a high-fall risk, install bolts in other portions of the cliff and place mesh along the sides to halt smaller rocks and debris.

There were partial road closures Thursday from miles 107 to 112 as crews cleared additional debris.

Each day about 6,800 people travel the Seward Highway, the only road that connects Anchorage and the Kenai Peninsula, McCarthy said.