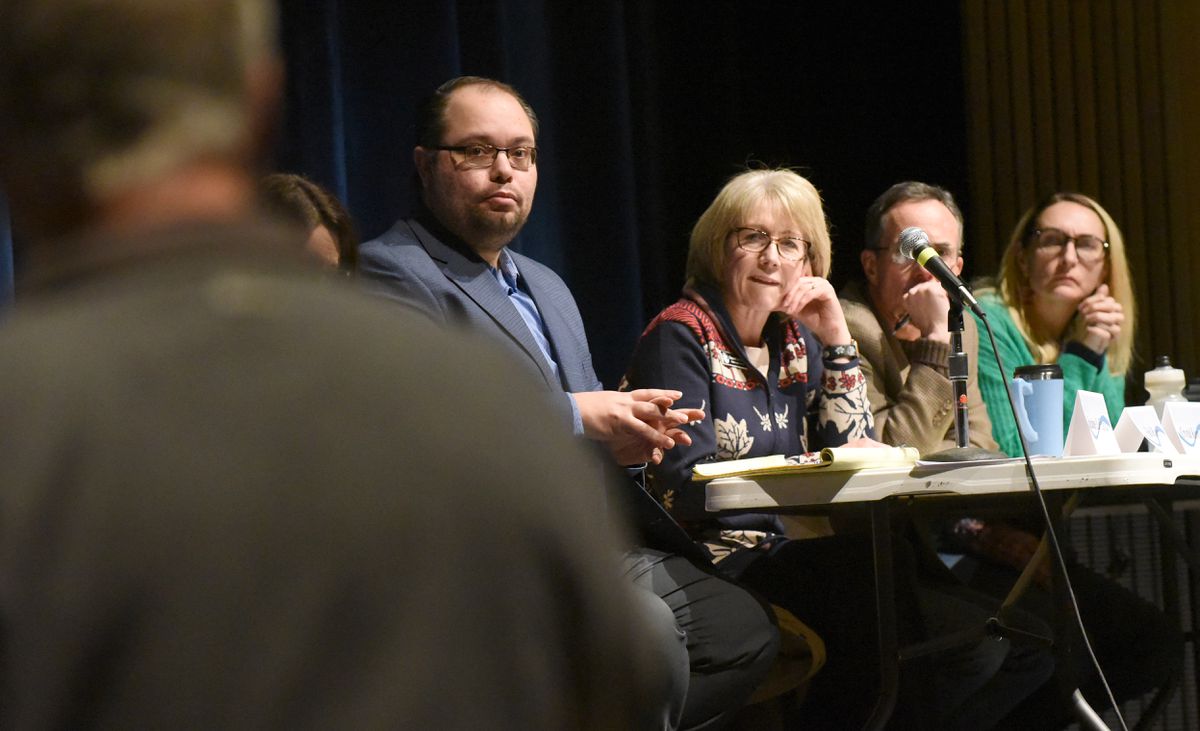 The Anchorage Assembly this week held town hall meetings to gauge how strong of a stomach residents have for a new tax.

Despite voters failing to pass tax proposals as recently as April, city leaders said Anchorage still needs additional money to offset declines in revenue from the state. Now, they are specifically seeking money to address the city’s homelessness problem.

In the first of three town hall meetings, held Tuesday at the Loussac Library, Assembly members, Mayor Ethan Berkowitz and the mayor’s staff spent most of the two-hour meeting explaining the municipality’s financial situation and new revenue options before hearing comments from the public.

Assembly members pitched two versions of an alcohol tax, and Assemblyman Fred Dyson gave a brief presentation to the over 100 in attendance on his sales tax proposal. Dyson’s tax would raise money to bolster the criminal justice system, from more cops to more jail and prison beds.

Eight members of the 11-member body need to vote in favor of a proposal to place it on the ballot for the April 7 election.

The Assembly could put multiple proposals on the ballot, though that risks them cannibalizing each other at the ballot box. Assembly Chair Felix Rivera said to increase the chances of a tax passing, he only wants one proposal to go before voters.

A different version of an alcohol tax is also an option. That proposal is sponsored by Assembly members John Weddleton and Meg Zaletel. It starts at 2% and could increase to 5%. Unlike the original alcohol tax, it would not fund more police.

Dyson does not have a co-sponsor for his sales tax. During a Wednesday work session, Dyson’s proposal was criticized by other Assembly members for being regressive and focusing on fighting crime rather than preventing it. Dyson wants to fund more police, prosecutors, forensic lab technicians and parole and probation officers. Those are handled at the state level. When asked how much money is needed to appropriately bolster those services and how the municipality would pay for them while not overseeing them, Dyson did not have immediate answers.

Another sales tax proposal, a business-led, time-limited tax to fund infrastructure projects and address homelessness called Project ’20s, hasn’t yet been introduced by an Assembly member.

Members have been clear that they want to focus on a proposal that has a chance with voters. Assembly member Forrest Dunbar said during a Wednesday meeting that given the failure of past sales taxes, he doesn’t see how Dyson’s has a chance.

In the mid-1980s, 42% of the municipal budget came from the state. Today, state dollars make up less than 1% of the local budget, according to a presentation from Berkowitz’s chief of staff, Jason Bockenstedt.

With fewer state dollars — a decline that became more prevalent after last year’s budget cuts — local politicians say they need new revenue in the form of taxes. Bockenstedt leaned on annual reports by the District of Columbia comparing its own tax burden to that of the largest city in every state to argue Anchorage residents are not heavily taxed. Over the years, the reports repeatedly found Anchorage’s burden to be the lowest of the 51 major cities.

During Tuesday’s town hall, 17 members of the public testified. Most focused on the alcohol tax, with six people directly opposed and four supportive. A couple supported a broad-based sales tax.

Jeff Jessee, dean of the College of Health at the University of Alaska Anchorage, said alcohol costs the state more than $1 billion per year through first responders, treatment programs, incarceration and health care.

“What other business is able to take the waste from their product and put it out on the street and expect the municipality and property taxpayers to come and clean it up for them?” Jessee said. “I can’t even push the excess snow from my driveway into the street.”

Testimony opposing the alcohol tax largely came from people working in the bar and restaurant industry. They said an alcohol tax would hurt small businesses, working on thin margins while providing jobs. Don Grasse, president of K&L Distributors, an alcohol distribution company, reminded the Assembly of a warning he made last year when he testified on the 2019 alcohol tax proposal.

“One of the things I communicated is that the industry would fight this tax like we have in the past and beat it at the ballot box," he said. "That’s what we did eight months ago, that’s what we did in the early ’90s. That’s the same thing that would happen with the current version.”

Others advocated for no new taxes, or abolishing existing taxes.

Christine Hill, a candidate for the Anchorage Assembly’s Midtown district, said the solution to municipal problems is not more money.

“No more B.S. — no more becoming Seattle," she said, garnering audible support from the audience.

Hill’s testimony was more in line with Wednesday’s crowd of about 100 in Chugiak, which was largely opposed to new taxes.

“I’m for no taxes,” Chugiak’s Jo Al Hintz told Assembly members. “I don’t want any taxes — you spend the money you’ve got and then it’s over.”