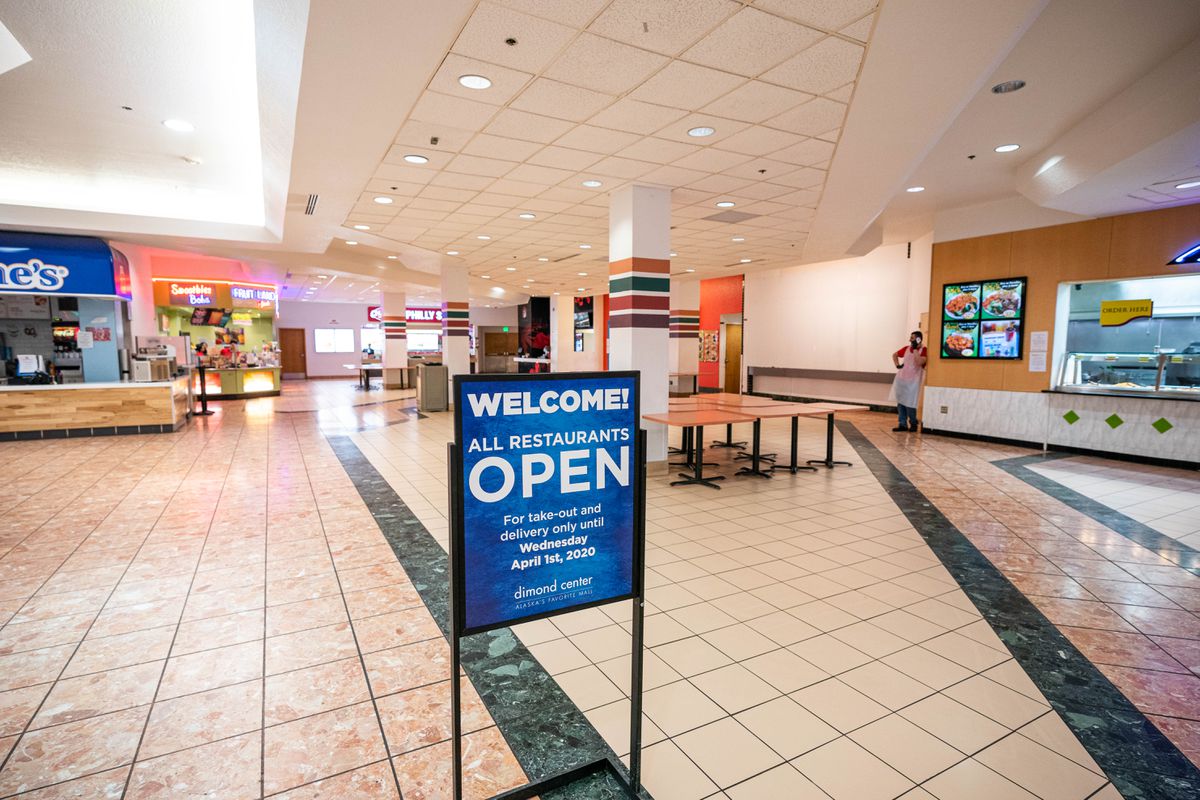 Anchorage Mayor Ethan Berkowitz on Friday gave businesses that are considering opening up next week additional guidance on how they can operate.

The plan was largely similar to one issued by the state that took effect Friday morning. The city’s plan does include a few small differences, and goes into effect Monday morning.

“We have taken a punch, and we are getting back up and we are moving forward,” Berkowitz said during a community briefing, referring to the economic toll the city is facing as a result of the coronavirus pandemic.

Like in the state plan, most businesses will be allowed to reopen, but with restrictions. Details on regulations for each sector are posted on the city’s website.

Restaurants can open for dine-in service, but only by reservation, and people seated at the same table must all live in the same household. Restaurants may operate at 25% capacity, and tables need to be at least 10 feet apart.

Restaurants will need to keep a 30-day log book with customers’ names and phone numbers so contact tracers can help track where people have been if there is an outbreak of the virus.

Retail shops and other public-facing businesses can also open up but must operate at 25% capacity with a maximum of 20 customers and sanitize surfaces frequently. The city recommends that these businesses prioritize curbside, entryway and home delivery. Retail shops can take walk-in customers. Service-oriented businesses with a retail-style storefront, however, such as print shops, may take visitors by appointment only.

Personal care services like barbershops and nail salons can open up for appointment-only service and are not allowed to have people in waiting areas. The employee and customer are allowed to be in close proximity, but must be 10 feet apart from other employees and customers. That differs from state regulations, which only require a 6-foot berth.

Shops must provide 15 minutes between appointments to sanitize the workspace.

Employees and customers at restaurants, retail and personal care businesses need to wear face coverings, except when eating or doing things like cutting hair around where the mask attaches to the face. Barbers must wear surgical masks.

Work stations at businesses offering professional services, such as law offices or accounting firms, have to be at least 6 feet apart, and walk-ins are prohibited. The city recommends that those businesses encourage employees to work from home and limit in-person meetings as much as possible.

With some differences in the reopening plans at the state and local level, there has been some confusion this week over which mandate Anchorage residents should follow.

Berkowitz and Gov. Mike Dunleavy both contend they have the ultimate authority, and both say they are working collaboratively on reopening plans.

In the original version of the state mandate, it argued that statewide compliance was critical to the reopening plan’s success. The state deleted that section of the mandate on Thursday.

When asked for clarification on whether Dunleavy will protest stricter regulations at the city level, spokesman Jeff Turner said in an email, “While the ultimate authority on health mandates lies with the State of Alaska, Governor Dunleavy is determined to work with local leaders in rural and urban communities when there is a need to differentiate mandates at the local level.”

Berkowitz said Friday that Alaska’s communities are starkly different, and have different needs.

“The one-size-fits-all policy doesn’t make any sense to people who know Alaska well,” Berkowitz said. “I think the governor and his team know Alaska well and they recognize the differences that exist between different communities.”

Some issues are still being worked out. The Dimond Center mall announced that it would be opening up Monday, though neither the city nor state mandates include regulations specific to indoor shopping malls.

Anchorage Economic and Community Development Director Chris Schutte said the city is aware of the issue and will reach out to the Dimond Center and other malls to resolve it.

Opening businesses means some people can return to work, though Berkowitz said he understands that puts pressure on workers to get back on the job, even if they have trepidation. Not returning to work could impact a worker’s ability to get unemployment. It’s something the city is looking into, Berkowitz said.

While the easing of restrictions allows money to flow through the city and state again, it also comes with some drawbacks. The state has partially lifted the ban on in-state travel and is encouraging people to explore along the road system.

“That’s obviously a concern,” Berkowitz said, adding that he’s also concerned about people in the commercial fishing industry entering the state and city.

“We are trying to make sure the amount of contact between people and the Anchorage population is kept to an absolute minimum. That’s one of the vectors that allows the disease to spread.”

Government leaders and public health officials say they will be closely observing signs for the virus gaining strength, and could reimpose stay-at-home policies if it starts to spread.

There are three factors that help the municipality understand how the virus is spreading and why some of the restrictions are being lifted, Anchorage Health Department Director Natasha Pineda said Friday.

Each of the three components are categorized by colors — red, yellow or green — which describe the status of the metric and whether it’s all right to move forward. Epidemiology, or “tracking disease trends to understand what’s happening in our community,” is the first metric, Pineda said.

Health officials monitor case counts, hospitalizations and how people got sick in the first place, Pineda said. The second metric outlined by Pineda looks at the city’s health care capacity and whether the city can care for people during a surge in cases.

“As we consider our ability and capacity to screen and test widely, we’re looking at making sure that people have access to testing and that they get their tests in a timely manner,” Pineda said.

The third metric examines the health department’s ability to track down positive cases and trace their recent close contacts. It also looks at whether the city can test those close contacts if they start to show symptoms.

Due to declining cases and hospitalizations, sufficient supplies and continued contact tracing, Pineda said each of the three metrics are labeled green, but certain metrics could be revisited in the future.

With Alaska, and Anchorage, being among the first states and cities in the U.S. to reopen their economies, Berkowitz said eyes across the nation are on Alaskans. Imposing strong measures to close businesses and keep people home helped limit the spread of the virus, and that’s allowing leaders to begin opening things up, he said.

“We have been, in a lot of ways, a leader in the country. People are looking at what we are doing,” he said. "As we open up, if we want to show the rest of the country the way to open up, we need to do it in a way that measures up.”