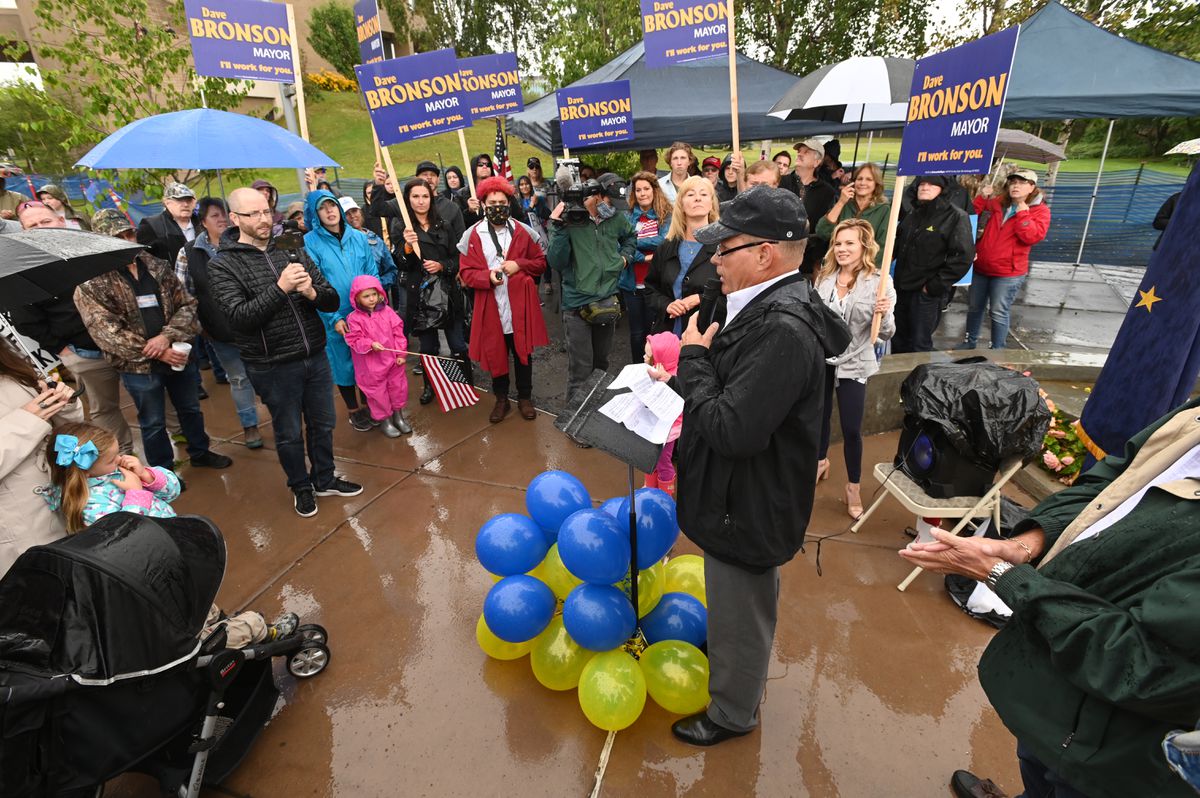 Surrounded by a crowd of residents shouting for more conservative city leadership, Dave Bronson announced his candidacy for Anchorage mayor Tuesday outside the Loussac Library.

A former U.S. Air Force and commercial pilot, Bronson’s speech centered around complaints about Mayor Ethan Berkowitz’s leadership during the COVID-19 pandemic, including the mayor’s intention to purchase several buildings with federal COVID-19 relief aid to house the homeless. Bronson also criticized the Anchorage Assembly and the closure of Assembly chambers due to the coronavirus.

“This past spring, I circled City Hall with you as we made our will known to the mayor that we wanted to open Alaska,” Bronson said.

Bronson has become an active member of the Save Anchorage community, a Facebook group that grew to almost 8,000 members as people protested the building purchase plans. The group is also critical of the mayor’s emergency orders shutting down or limiting service at businesses during the pandemic.

Bronson made a splashy entrance to the already crowded race. As he took to the lectern to deliver his speech, more than a dozen people in attendance unsheathed “Bronson for Mayor” signs from plastic.

“Over the course of the last several months, I’ve stood shoulder-to-shoulder with you, fighting to hold on to the peaceful, safe and prosperous city we once knew,” Bronson said.

Bronson was introduced by Anchorage Assemblywoman Jamie Allard, who gained the support of the Save Anchorage crowd after vocally opposing the decision to purchase the buildings for homeless services.

Official filing with the city begins Jan. 15 and ends Jan. 29. The election is April 6, but mail-in voting starts in March. The position is officially nonpartisan. A candidate needs at least 45% of the vote to avoid a runoff.

Bronson’s short speech indicated his campaign will center around Berkowitz’s decisions over the past few months.

“I promise you this, as hard as Mayor Berkowitz has worked to buy those four properties, I will work twice as hard to sell them,” Bronson said.