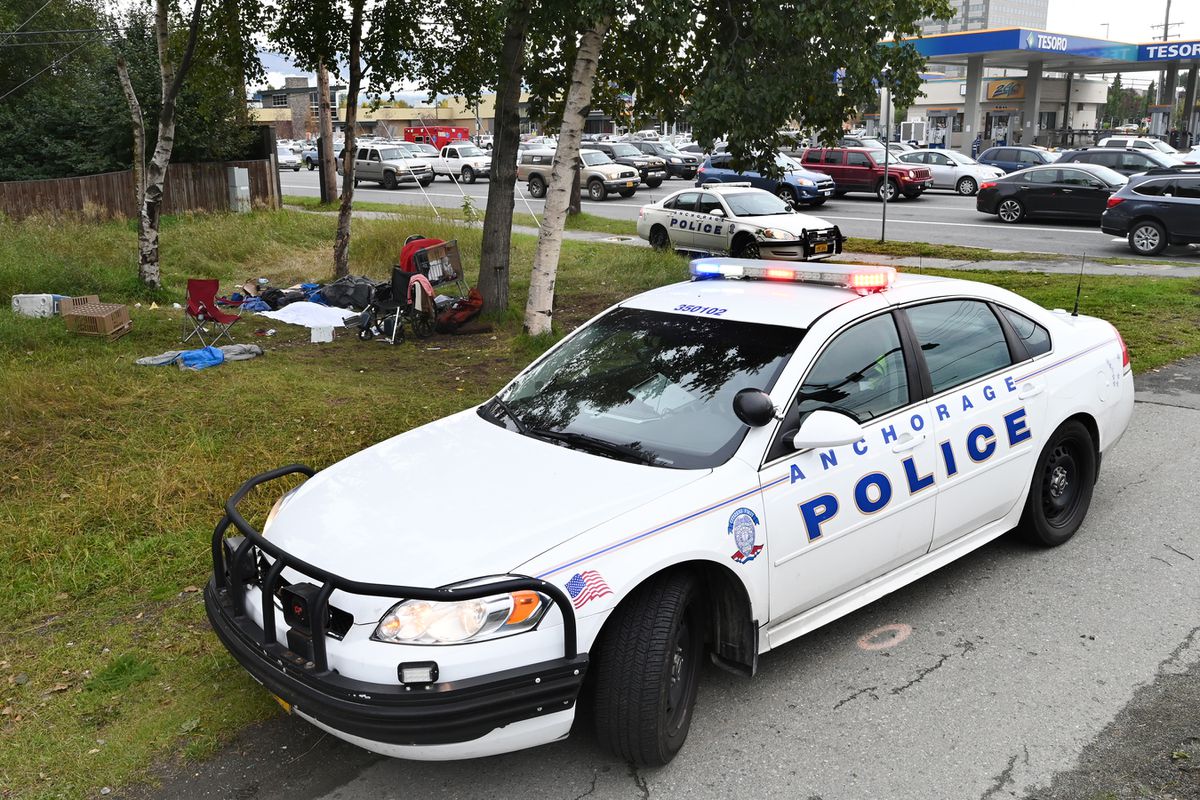 Update, Oct. 22: Police have identified the woman as Maggie Penix, 43.

Another woman has died in the woods at the intersection of Northern Lights Boulevard and the Seward Highway, a spot where Anchorage homeless residents often camp.

Anchorage police had yet to identify the woman Wednesday evening but do not believe the death is suspicious, a police spokeswoman said.

By 5:30 p.m., a white truck from the Alaska State Medical Examiner Officer showed up. A young woman examined the body and took photos. Officers strung sleeping bags from trees and around a camping chair to give the dead woman privacy. She was placed in a body bag and driven away.

This wooded area has seen death this summer. It’s where Eleanor Roland, 59, died on Sept. 2. And where Joyce Fredericks, 64, died on June 26. A few blocks away, at East 20th Avenue and Seward Highway, is where George Murphy was found dead on the sidewalk on Aug. 30.

Both Fredericks and Murphy were familiar faces at Bean’s Café, a soup kitchen on East Third Avenue that now operates a mass shelter at the Sullivan Arena, close to where Murphy died.

Shawn George, Roland’s son, said his mom was a Calista Corp. shareholder who had been homeless on and off since 2006. She recently had contracted COVID-19 and spent two days at the Alaska Native Medical Center before being released, he said.

He is grieving his loss and is still in a state of shock over her death, George said. He is trying to figure how to attend a memorial for his mom in her Western Alaska village.

“I loved my mom and honored her. Although she was homeless, she was my mom,” George said by email.

Sitting in the woods in his temporary camping spot, Oscar Frank Jr. said he watched officers give CPR to the unidentified woman who died on Wednesday. He said he had spoken with her in recent days.

The group she was with had obvious struggles with alcohol. He said he saw her collapse on Wednesday afternoon.

“She went down hard,” Frank said. “It was shocking.”

Frank and his common-law wife arrived in Anchorage from Fairbanks on Saturday, he said.

They moved south as winter approaches and are also sleeping along the Seward Highway between Northern Lights Boulevard and Fireweed Lane.

“My friend dropped us off right there,” Frank said, pointing to the gas station on the corner across from the woods.

The couple has tried to get into the Sullivan Arena, converted into a shelter during the coronavirus pandemic, but it’s operating at capacity. They have put their name on a waiting list, he said.

The woman who died Wednesday is at least the 57th person who has died outdoors in Anchorage since 2017 and the 13th so far this year, according to police information compiled by the Anchorage Daily News.