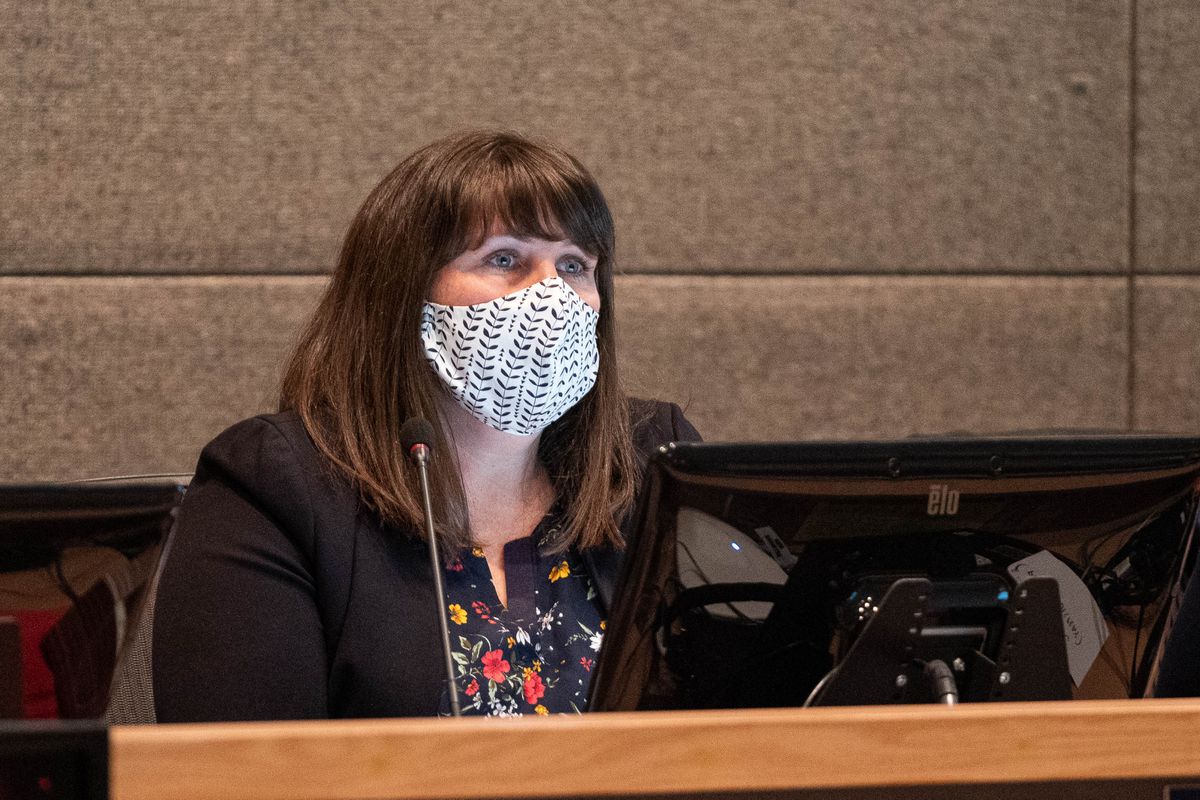 After a vote by the Anchorage Assembly on Friday night, Austin Quinn-Davidson will serve as acting mayor when Mayor Ethan Berkowitz’s resignation goes into effect at 6 p.m. Oct. 23.

The Assembly voted to reorganize and chose Assembly member Quinn-Davidson as the new chair, replacing Felix Rivera. City charter states that the Assembly chair will serve as acting mayor during a vacancy.

Quinn-Davidson, 40, is an attorney who was first elected to the Assembly in 2018 and was reelected this year. She will be the first woman and openly gay individual to serve as mayor or acting mayor of the Municipality of Anchorage.

Assembly members selected Quinn-Davidson as acting mayor in the wake of a tumultuous week that began with a local news anchor making unsubstantiated claims against Berkowitz and culminated with his resignation Tuesday, after he admitted to having a “consensual, inappropriate messaging relationship” with her. Berkowitz and his administration have come under fire from community members who strongly disagree with their approach to the COVID-19 pandemic, homelessness and other issues, and Quinn-Davidson will become acting mayor at a time when the city remains deeply divided.

In an interview after Friday’s meeting, Quinn-Davidson said taking on the role of mayor is not something that she set out to do.

“At first, I was very resistant, because it is a big task,” she said.

“I think the most important role of a mayor right now is to inspire trust in government, and to make people feel at ease during a time that is pretty tumultuous,” she said. “I think revitalizing the economy and ensuring that small businesses can survive and that people can get back to work is key. Of course, that interplays with public health and safety, and those two are so aligned, we need to work together on both."

The Assembly on Friday also picked Rivera as its vice chair, which essentially means that he will retain his same leadership role: Rivera will ascend to the position of chair next Friday when Quinn-Davidson becomes acting mayor.

The final vote tally in the selection of the new Assembly chair and vice chair was not publicly shared. Following the process laid out in the city charter, members voted by secret ballot. Municipal clerk Barbara Jones then tallied those votes and announced the winner.

It’s not yet clear for how long Quinn-Davidson will serve as acting mayor.

Speaking at the meeting, municipal attorney Kate Vogel said the city’s charter leaves some ambiguity on how to proceed in electing the next mayor — whether the city needs to hold a special election to choose the next mayor or whether it can wait until the regular election in April.

Vogel said that the Assembly has three legally defensible choices: It can hold a special election in January, 90 days after Berkowitz’s resignation takes effect. Or it can decide to forgo a special election and have Quinn-Davidson serve as acting mayor until the regular election in April, when voters choose a new mayor.

Vogel said the municipal charter specifies that the mayor’s vacancy must be filled in a special or regular election held 90 days or more from when office is vacated.

In this case, a special election could occur on or after Jan. 21, 2021, and the voters would elect a new mayor who would serve only until June 30, Vogel said.

The city estimated the cost of a special election to be about $350,000, municipal clerk Barbara Jones said.

Rivera said that the Assembly will make a decision on how to proceed at a future meeting.

As acting mayor, Quinn-Davidson will be tasked with guiding the city through a difficult mayoral transition. The city is experiencing its highest number of COVID-19 cases since the pandemic began. The economy has been hamstrung by the pandemic, and the issue of homelessness has proven challenging for the city to resolve.

“We’re going through a pretty difficult transition with the mayor resigning and we’re working on some incredibly important things — our economy, COVID-19, and we just began our lengthy process of developing our 2021 budget,” Assemblyman Kameron Perez-Verdia said in an interview before the meeting.

Before voting, Assembly members expressed their desire to choose an acting mayor who would bring stability to the city and act as a caretaker of the office until the citizens elect a new mayor.

Assemblyman John Weddleton was also nominated to become Assembly chair and then acting mayor by Assemblywoman Suzanne LaFrance. During a period for statements at the beginning of the meeting, Assemblywoman Crystal Kennedy said that she supported Weddleton as acting mayor because of his experience as a businessman, adding that it was important for Assembly members to also consider the current political climate.

Rivera nominated Quinn-Davidson to take over his position as chair.

“I know vice chair Quinn-Davidson to be a person who is compassionate, a dedicated public servant, a superb listener, a critical thinker and most importantly, in my opinion, level-headed, and even-keeled,” Rivera said.

After holding its vote for acting mayor, the Assembly heard about two hours of public testimony. Several people took issue with how the vote was held, saying the process lacked transparency and did not take into account public input because testimony was held after the vote.

A number of the people who testified criticized the city’s handling of the pandemic, while several others praised the Assembly for its actions.