‘Trying to do what we can’: How 5 Anchorage restaurants and breweries are working to survive the latest shutdown 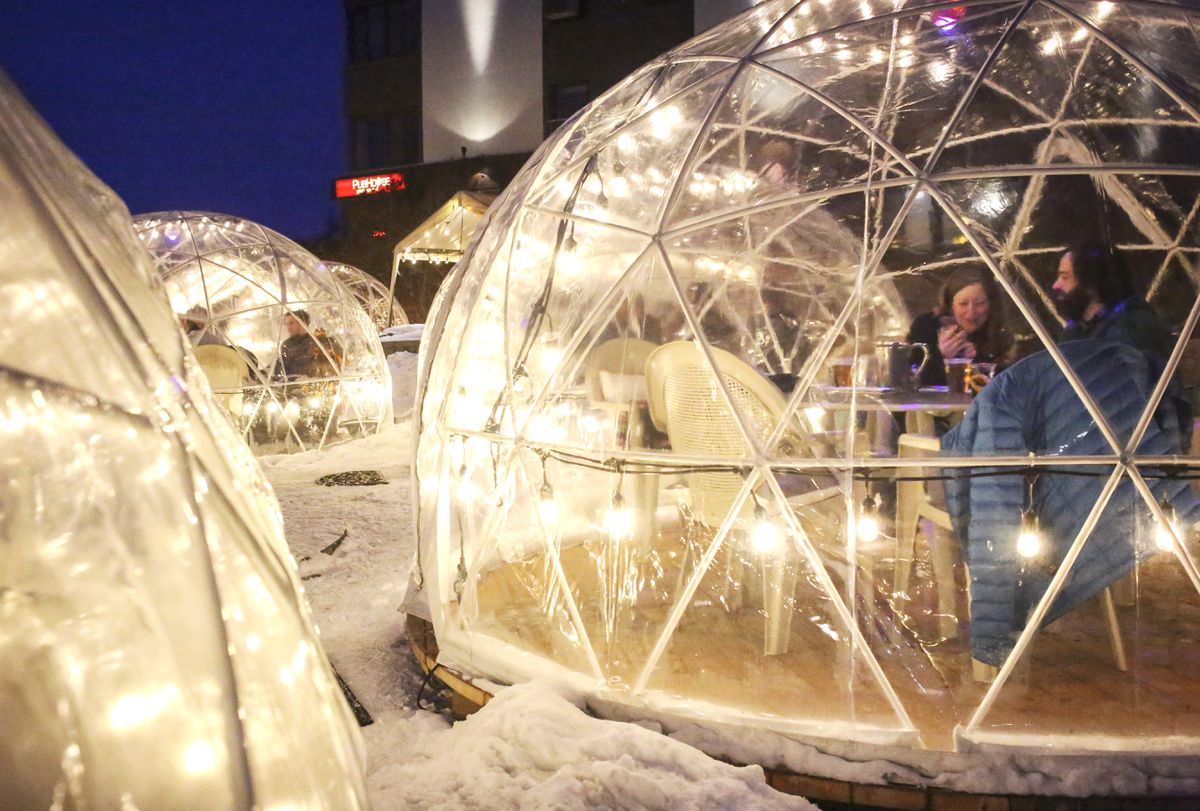 With indoor dining closed for December and coronavirus cases surging to record levels in Alaska, this winter will be tougher than ever before for Anchorage’s restaurants.

Across the municipality, restaurants, bars and breweries shuttered their doors to indoor dining service on Dec. 1 as the latest round of city-mandated coronavirus restrictions took effect.

Many restaurants and bars are now left scrambling to find ways to survive as they are cut off from their main income source for the third time since March.

The monthlong mandate limits bars and restaurants to takeout, curbside and delivery services and to outdoor dining only as the city is swathed in snow and facing plummeting winter temperatures, compounding challenges for the industry.

Some are doubling down on takeout and delivery, using third-party systems or launching their own online ordering and delivery services. Others are braving the frigid weather and erecting outdoor dining structures in hopes of attracting customers.

When twilight descends at the Inlet Tower PubHouse on West 12th Avenue, a few domes glow in the courtyard, a table for dining inside each one.

The domes are owner and manager Bob Gross’ bid to keep dine-in business flowing through the South Addition hotel restaurant during the pandemic.

Each outdoor table inside its own enclosed “igloo” is at least 10 feet apart from the next, meeting city-mandated standards, Gross said.

“Being a restaurant owner, you wake up to the new normal every day and try to figure it out,” Gross said. Over the summer, he bought six of the domes and constructed an entirely new outdoor dining area.

The domes, which the city approved for use under the latest emergency order, have been a popular way for households to dine together and he’s adding two more, he said.

But dining outdoors in the winter is tricky. Gross has also added lights and heaters to the domes, laid out metal walkways for safety in the ice and snow and constructed a “warming tent” with a viewing window for his servers, so they can keep an eye on their guests without freezing.

[Earlier coverage: Anchorage restaurants brace for a hard winter and the possibility of another shutdown]

“We have also figured out how to provide touchpoint sanitation every hour inside of each one of these Inlet igloos,” Gross said. “It’s constant training, new information they need practice to meet all the guidelines that get enhanced as time goes on. It takes a significant amount of effort and time and expense.”

For Jimmy Zhou, owner of Jimmy’s Asian Food in Midtown Anchorage and Jimmy’s Sushi in Eagle River, there’s no option but to rely on to-go and delivery service.

He began using third-party delivery service in May because many customers were afraid to eat indoors due to the pandemic. Zhou said he loses money using the expensive delivery service, but he’s forced to rely on it to maintain his customer base and keep his employees working.

“A little bit of debt is better than nothing,” he said. “If I don’t work with them, then we have less business.”

This month, he will cut back employee hours while the dining rooms are closed, he said.

An 80-foot-long tent has popped up in the parking lot of Matanuska Brewing in Midtown. General manager Tyler Schlereth said staff at the brewpub are trying to be creative with a bad situation.

The brewery had purchased the tent during a previous shutdown, and Schlereth had to cut openings in it at either end to abide by the current outdoor dining mandate, which requires all tents be ventilated, he said.

The tent has about 12 tables and is heated with four portable fireplace heaters and air pumped in from an industrial gas heater that hooks up to the restaurant’s gas line.

Business was bad before the shutdown, with the location making about 25% of what it did the previous year, Schlereth said. No one at the brewpub has been laid off, but everyone has taken a pay cut, he said.

“We’re trying to do what we can to stay afloat, stay alive so we don’t have to shut down for good,” Schlereth said. “I think everybody is right about now.”

The pandemic has changed the way that Turnagain Brewing operates — probably for good. The brewery has developed a new online ordering system for its to-go beer. It is also offering curbside service.

But it has also cut back operation hours, and employees work less while the owners are taking on more of the labor, co-owner Ted Rosenzweig said.

And they opened their outdoor beer garden with heaters mounted on skis. Rosenzweig said hopes it will draw customers despite freezing temperatures.

“We really rely upon taproom sales for the bulk of our profits, so that has suffered during lockdown and during the pandemic,” Rosenzweig said.

A week ago, Bear Paw Bar & Grill owner Mike Pulcifer had about 80 employees at his Midtown restaurant. Now, he has about 10 or 12 left.

He’s laid off almost the entire staff and a small crew is running a to-go operation. Pulcifer is paying the costs of the mortgage, utilities and insurance — about $40,000 a month. All the money from to-go sales goes straight back to employee paychecks, he said.

He said he’s kept longtime staff and financially vulnerable employees like single mothers. They need to make at least $20,000 in sales to cover the cost of their employment in December, or he’ll halt the to-go operation in January if the indoor-dining shutdown is extended, he said.

“If it’s going to make a difference shutting down the restaurant to save some lives, that makes sense,” Pulcifer said. “But at the same time, you have to deal with the reality of this. This is somebody’s livelihood and how they’re going to pay their rent. How they’re going to feed their families.”