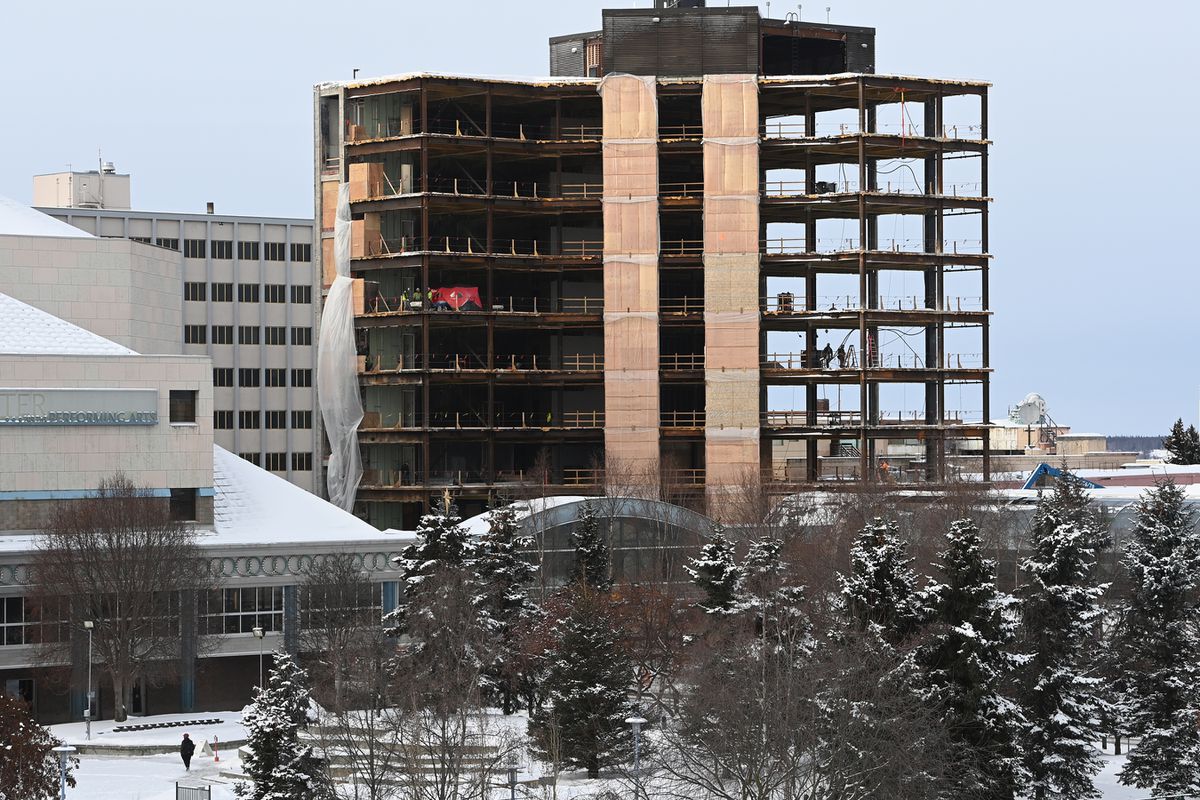 Renovation of the former Key Bank building at 601 Fifth Avenue continues on Wednesday, Feb. 10, 2021. The commercial office building is expected to be completed in 2022. (Bill Roth / ADN)

Renovation of the former Key Bank building at 601 Fifth Avenue continues on Wednesday, Feb. 10, 2021. The commercial office building is expected to be completed in 2022. (Bill Roth / ADN)

Battered and left vacant by the 2018 Anchorage earthquake, the half-century-old, nine-floor downtown building that once housed a Key Bank branch is undergoing a $41 million renovation inspired by Alaska’s glaciers.

Once complete, the former Key Bank Plaza will be modernized and draped in glass instead of concrete, with an inward-sloping facade above the entrance, said developer Derrick Chang, who is with the project owner, 601 Fifth Ave.

“We wanted to capture the Alaska glacier as an inspiration,” Chang said. “So the architecture will have a glacier-like façade to give you that look. At the entrance, it will look like an ice cave, so you create an Arctic phenomenon.”

The upgraded office building will be much larger, and seismically reinforced to withstand future earthquakes, Chang said. Key Bank is no longer a tenant, and the building will have a new name, 601 5th Ave.

Chang said a key goal of the project is revitalizing downtown after many businesses left for newer Midtown offices.

“We believe it’s the heart of the community, so it’s important to take this step now,” he said.

Officials tracking the project say it will essentially be a new building.

“This is basically tear-it-down-to-the-bones and rebuild it,” said Andrew Romerdahl, senior director of real estate for Cook Inlet Region Inc.

“Technically, it will be a renovation, but in spirit, it’s a new construction building,” he said, during an overview of the Anchorage office market at a recent Building Owners and Managers Association of Anchorage meeting.

Completion is scheduled for the end of this year, Romerdahl said.

The ground floor will feature retail and dining space, he said. The mechanical, electrical and plumbing systems will be replaced, along with the stair tower damaged by the 7.1 earthquake in 2018. Modern elevators and a freight elevator will be installed, according to a statement from the architect, Perkins&Will.

Chang said a nearby parking garage with more than 400 spaces is planned as a next phase of the project, with construction for that expected to start next year.

The improvements will benefit from a 10-year exemption from property taxes for deteriorated properties, approved by the Anchorage Assembly last year. Alex Slivka, the chief fiscal officer for Anchorage, recommended Anchorage Assembly approval of the exemption in a memorandum in July.

The deal, approved by the municipality last year, also includes up to five years of deferred taxes to provide temporary relief until those years’ bills come due.

The building is not yet “substantially renovated,” as required by the Assembly resolution, so the benefits have not yet kicked in, said Chris Schutte, director of Anchorage’s Office of Economic and Community Development.

The city this year will continue to tax the property at its full value, he said.

Schutte said the tax break will eventually pay for itself, because the estimated tax revenue from the improved building will be higher than it is currently.

The developer has estimated that it will pay $717,000 in new city property taxes once the tax exemption is complete, according to the memo from Slivka. The municipality’s Property Appraisal Division has agreed with that future estimate, Schutte said.

The building before the earthquake, in tax year 2018, generated $230,000 in municipal property tax revenue, Schutte said.

The tax deal will also have the benefit of pushing the developer’s return on investment to an “acceptable” level for retail and office space, according to the memorandum.

Construction, launched last year, provides high-paying jobs in an economy hurt by the COVID-19 pandemic, Schutte said. Once the renovation is complete, people working in the building will support restaurants and shops downtown.

During the pandemic, downtown has felt like a ghost town with so many office workers staying home and many events canceled, he said.

“Getting people back into workspaces will help bring back some of that vitality to downtown,” he said.

Chang is part of the family development enterprise established by his parents, Joe and Maria Fang, that owns various buildings in Anchorage. The group built the 15-floor 188 Northern Lights building along Northern Lights Boulevard in 2007, and tore down the old Northern Lights Inn on the same street in 2017.

Chang said the Fifth Avenue building will be Class A — the newest, best quality. It will be the first major office building renovation in downtown since the completion in 2014 of what’s now the Anchorage Police Department headquarters on Fourth Avenue.

Experts say office vacancy rates could rise following the COVID-19 pandemic, as some employees may keep working remotely from home, shrinking the need for office space.

Chang said that possibility should not be an issue.

He said most downtown buildings were constructed before 1990, and government agencies are often looking to lease modern buildings that meet the latest requirements.

“We are not overly concerned,” he said.

The project has struggled to advance, with the poor economy during the COVID-19 pandemic, adding to the problems. But a new group of investors led by Larry Cash, the founder of RIM Architects, is expected to make a “go, no-go” decision around late this summer, Halcro said.