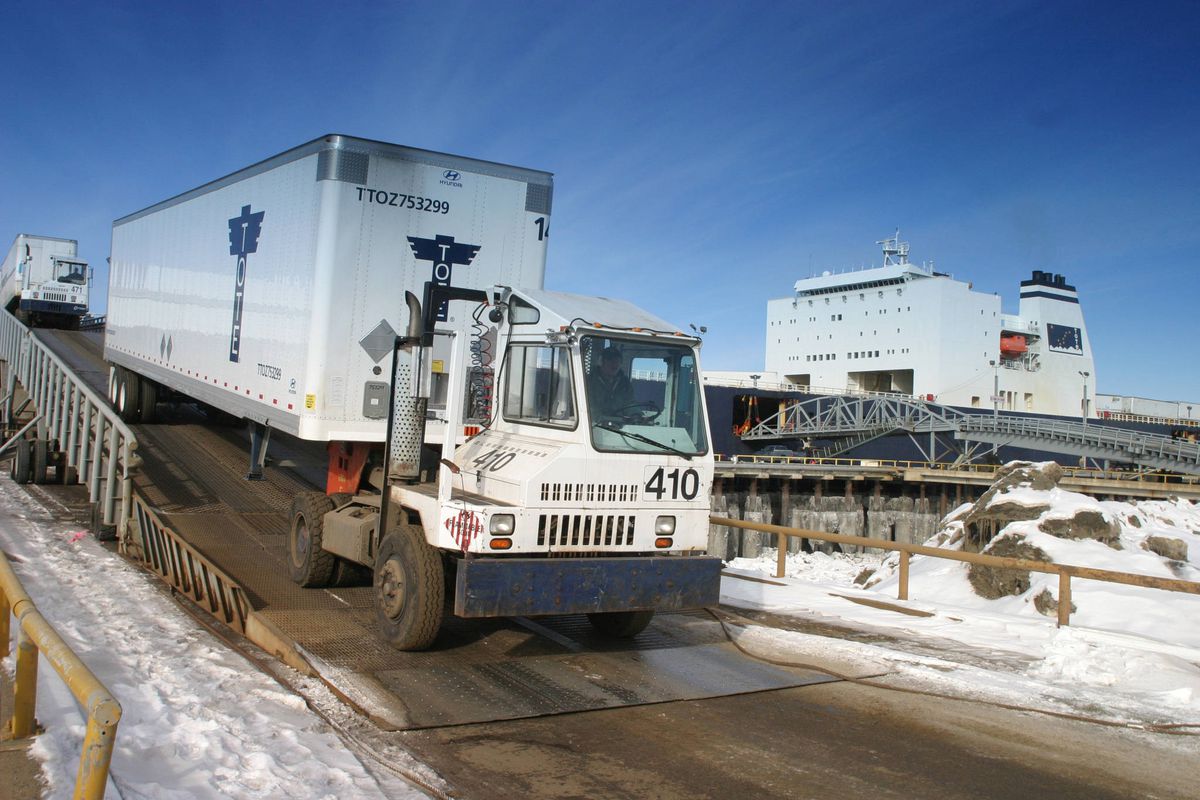 A TOTE truck pulls a 53-foot trailer off the Midnight Sun at the Port of Alaska in this file photo. A trial pitting the Municipality of Anchorage against the federal government was set to begin Feb. 16, 2021, some seven years after the lawsuit was filed and nearly 11 years since work was halted on a failed expansion project. (Alaska Journal of Commerce file photo)

A TOTE truck pulls a 53-foot trailer off the Midnight Sun at the Port of Alaska in this file photo. A trial pitting the Municipality of Anchorage against the federal government was set to begin Feb. 16, 2021, some seven years after the lawsuit was filed and nearly 11 years since work was halted on a failed expansion project. (Alaska Journal of Commerce file photo)

A trial is now underway nearly seven years after Anchorage sued the U.S. Maritime Administration for its role in the botched expansion of the city’s port, but a final ruling isn’t likely to come down anytime soon.

Assistant Municipal Attorney Bob Owens said that the participants in the two- to three-week trial will be scattered across the country.

Attorneys for the municipality will attempt to complete their arguments that the federal agency owes the city upwards of $320 million for its role in the port construction project that started back in 2003 and was deemed a failure in 2012.

Former Mayor Dan Sullivan’s administration sued MARAD in late February 2014 alleging agency officials did not provide the oversight of construction work they were responsible for under a memorandum of understanding, or MOU, signed with the city. According to Anchorage officials, that lack of oversight, which included rarely having someone on-site, led directly to the fundamental construction issues the project experienced.

A Justice Department spokeswoman declined to comment on the case via email, but Justice attorneys representing MARAD argue the agency was employed by Congress to simply be a vehicle for getting federal funding to the work. They insist the MOU only clarified Anchorage officials’ decision-making authority for the project and it was the city’s responsibility to provide requirements and direction to MARAD for the project.

Owens said that while he had no prior experience with the typical process of Federal Claims Court cases, Anchorage’s lawsuit was delayed about 18 months to two years as a 2013 lawsuit the city filed in Federal District Court against a handful of project contractors played out. That lawsuit netted $19.3 million for Anchorage through seven individual settlements made in early 2017.

“This court is set up to handle contract disputes involving the federal government; that’s all it does,” Owens said in an interview. “It’s purely contract disputes so it’s sort of unique in that respect and it has national jurisdiction.”

But the unique traits of the court don’t end there. For one, there is no jury for the trial; the presiding judge likely won’t issue a ruling until long after the trial is over.

Following the trial, each side typically submits a series of post-trial briefs and replies.

“Suddenly you’re at 100 days out before the judge even starts reading,” Owens said.

State lawmakers and the members of Alaska’s congressional delegation have largely said the lawsuit against MARAD needs to be resolved before significant funding for future work to rebuild the critical facility’s aging and corroded docks can be considered.

While the final parameters are still being evaluated, the current port modernization plan contains just more than $1 billion of unfunded rehabilitation and construction.

MARAD did award the municipality two development grants in late 2019 and early 2020 totaling $45 million for current work to replace the port’s petroleum and cement terminal for the first phase of the second construction effort.

Owens said city attorneys offered a settlement early in the case proceedings that was rejected and the sides subsequently engaged in mediation but “there’s been no overtures” for several years, adding the city would still be open to settling the case outside of court.

If that doesn’t happen, Anchorage attorneys believe the history of the case weighs in their favor.

“We don’t assume anything but we have successfully navigated their motions to dismiss the case and their motions for summary judgment. We’ve got a pretty good record in motion practice so we’re cautiously optimistic,” Owens said.

Anchorage Assembly member Christopher Constant leads the Assembly’s watch of the port as chair of the Utility and Enterprise Oversight Committee; it’s also in his district. He said that he is operating under the belief that the city will not get anything from MARAD.

“They’re the federal government, you can’t make them pay,” Constant said in an interview. “I’m planning for the fact that we have to be responsible for the redevelopment of that port.”

Regardless of the ultimate construction financing package, he said the port’s primary users — most notably TOTE Maritime and Matson Inc. — are deeply involved in ongoing discussions with city officials about the scope of the project after many months of debate over tariff increases to help pay for the new petroleum and cement terminal.

“We are in a place where people are working together and there are great, detailed communications back and forth about what the priorities are. We’re working through who is going to have what and who’s paying for it,” Constant said. “It’s good that they’re involved.”

He added that in spite of his skepticism about the prospect of MARAD paying out because of the litigation, he still supports it.

“We’ve been wronged and we need to have a judgment that shows that,” Constant said.