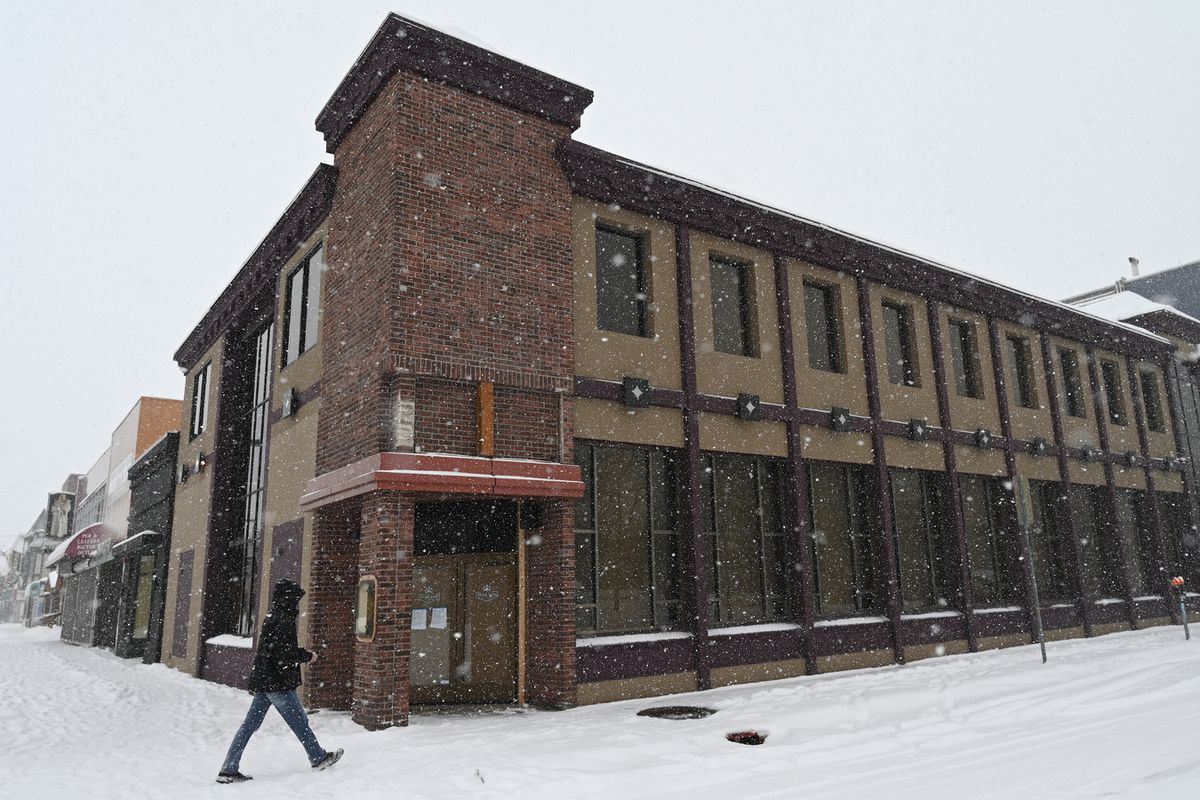 Bruce Burnett plans to open his second Bear Paw Restaurant at Fourth Avenue and E Street by early summer after a renovation of his building that once housed the Hard Rock Cafe is complete. Photographed on Monday, March 15, 2021. (Bill Roth / ADN)

Bruce Burnett plans to open his second Bear Paw Restaurant at Fourth Avenue and E Street by early summer after a renovation of his building that once housed the Hard Rock Cafe is complete. Photographed on Monday, March 15, 2021. (Bill Roth / ADN)

The downtown Hard Rock Cafe Anchorage, a boarded-up eyesore during the COVID-19 pandemic, is being replaced with the city’s second Bear Paw restaurant.

The new restaurant should open by early summer, featuring the Alaska-themed menu and decor also found at the Bear Paw Bar and Grill, which opened in Midtown when the pandemic began one year ago, said Bruce Burnett, owner of the Bear Paws.

“It’s going to be beautiful,” Burnett said. “It will be a showplace in this town.”

Burnett said the Hard Rock Cafe boarded up its windows last spring during the nationwide protests over the death of George Floyd, the 46-year-old Black man killed by police in Minneapolis in May.

The rock-themed chain restaurant stayed shuttered as the COVID-19 pandemic dragged on, closing permanently in January.

Business owners in the area are glad to see the plywood removed from the building at 415 E St. and a new restaurant moving in, said Amanda Moser, executive director of the Anchorage Downtown Partnership.

“The partnership is thrilled to see local businesses come in to activate this space that’s in the heart of our downtown,” Moser said. “We’re really excited to see the boards come off the windows and work happening in that space.”

Moser said downtown activity slowed significantly during the pandemic. But people are returning in ever-larger numbers as vaccination rates rise.

The Hard Rock Cafe Anchorage opened six years ago, said Burnett, owner of the building that housed it.

Burnett, 72, had briefly operated the original Bear Paw restaurant at the address in 2013, replacing the Rumrunners Old Towne Bar and Grill that was run by a previous owner and known for liquor license violations and assault allegations.

But Burnett agreed to let the Hard Rock Cafe replace the Bear Paw in 2014.

The original Bear Paw did well, and tourists from nearby hotels “swarmed” it, he said.

Burnett, whose Midtown Bear Paw restaurant replaced the TGI Fridays that he owned, said locals and tourists prefer Alaskan food and beverages over the usual fare offered by chain restaurants.

They often want dishes with items that include fresh Alaska salmon, halibut, reindeer sausage and locally brewed beer, he said.

“Anyone that travels to Anchorage wants to see how locals live and what they eat and do,“ he said. “It’s really good to see, and it will attract more people to this area.”

At the downtown building, Burnett and his crew have hung framed vintage photographs of Anchorage in its early days. They’ve suspended a huge wooden canoe from the ceiling. He plans to add mounted bears and other wildlife.

The Hard Rock Cafe sank a lot of money into the interior, he said.

“The Hard Rock left it like brand new,” he said.

Burnett will soon remodel the exterior, removing what’s left of the Hard Rock Cafe with its decorative purple bricks.

He said the Bear Paw downtown should start off somewhat slow this summer, and he plans to initially open only on the building’s first level, hiring perhaps about 40 people.

Major cruise lines aren’t expected to visit Alaska this summer, the Anchorage Market has left downtown and the nearby area along Fourth Avenue will be remodeled this summer — all of which are factors that will slow business, he said.

But 2022 should be strong, especially when cruise ship tourists return to Alaska, allowing him to expand to additional floors, he said.

The Midtown Bear Paw has performed better than the TGI Fridays did before the pandemic, Burnett said. He’s expecting similar success downtown.