Far fewer ballots were counted on election night than during previous Anchorage mail-in elections. Here’s why. 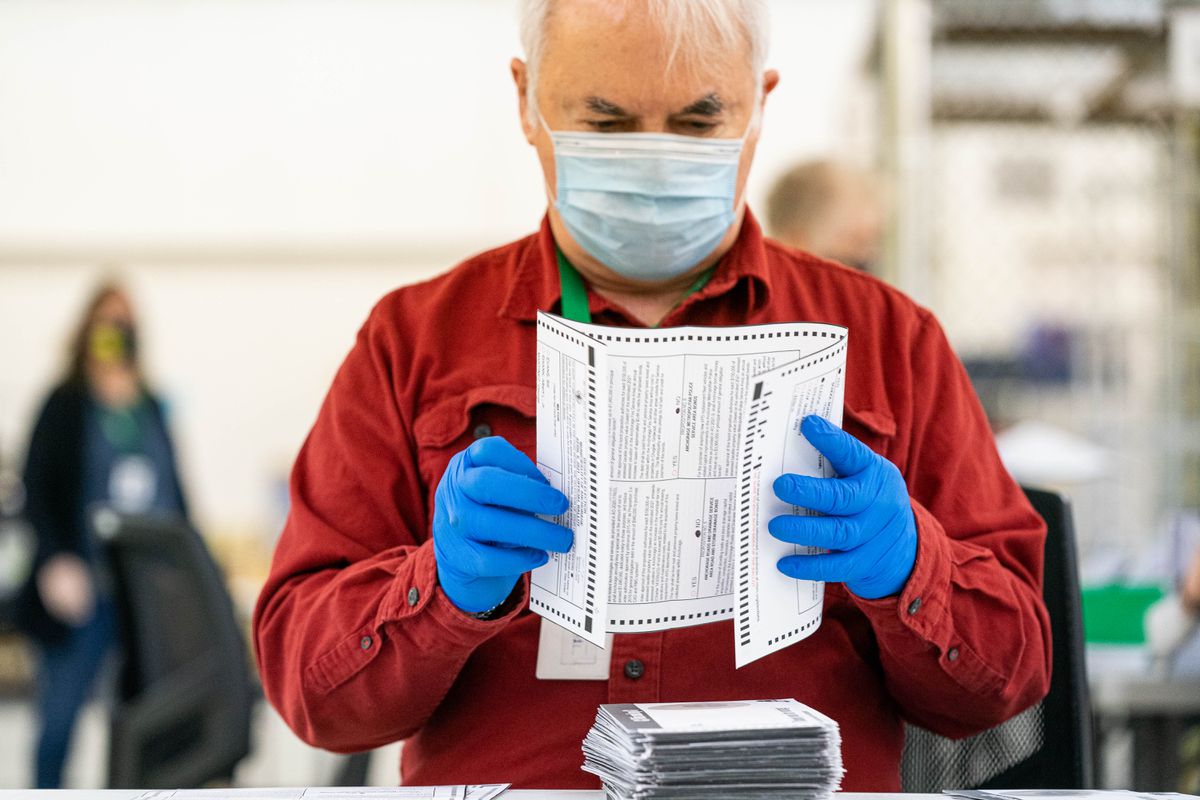 Election worker Marvin Cox unfolds a ballot so it can be scanned on Wednesday, April 7, 2021 at the Municipality of Anchorage election center. The municipality is continuing to count ballots a day after election day. (Loren Holmes / ADN)

Election worker Marvin Cox unfolds a ballot so it can be scanned on Wednesday, April 7, 2021 at the Municipality of Anchorage election center. The municipality is continuing to count ballots a day after election day. (Loren Holmes / ADN)

A flood of last-minute voters over the weekend and on Tuesday were among several reasons that Anchorage election officials fell behind in a key part of the ballot-counting process on election day, which slowed the overall ballot tabulation, officials said Wednesday.

A large number of ballots with corrections and stray marks also contributed to the issue, elections officials said in a news release late Wednesday.

On Tuesday evening, city election officials released preliminary results that included just 10,606 ballots -- less than 4.5% of all registered voters in the Anchorage municipality, leaving key races, including the mayor’s race, up in the air on election night. During the city’s first-ever mail-in election in 2018, nearly five times that amount -- upward of 50,000 ballots -- had been counted by the close of election day.

But by Wednesday evening, more than 31,000 more ballots had been counted, bringing the total to 41,826. The early results put Forrest Dunbar, an Assembly member from East Anchorage, and Dave Bronson, a retired pilot, far ahead of other candidates in the mayor’s race, though neither are likely to gain enough of a lead to avoid a runoff.

This year, multiple unexpected, minor obstacles conspired to pull elections officials away from adjudication, an important part of the ballot-counting process, according to Municipal Clerk Barbara Jones.

Obstacles included a deluge of more than 11,000 ballots received at the city’s election center on Monday, Jones said. At the same time during the election last year, just about 3,000 had arrived on the Monday before election day.

Another, more minor issue was a flooding toilet at the elections center on Friday, Jones said.

On Tuesday, the city saw a record turnout of last minute, in-person voting at its vote center in Eagle River, said Erika McConnell, deputy municipal clerk. The city’s other two vote centers were also inundated with high turnout on Tuesday, although officials do not yet know if records were reached, McConnell said.

Jones said they had to send extra workers to the vote centers with more sample ballots, pens, questioned ballots and other supplies.

Election workers on Wednesday were still scanning in the many ballot envelopes collected from the vote centers and drop boxes on Tuesday, a process that would not be finished by the end of the day, Jones said.

Thousands of ballots were also left in secure drop boxes around the city on Tuesday, and ballots sent by mail are continuing to arrive, McConnell said.

“We had to take ourselves away from adjudication to do other things, and so we are behind on our adjudication,” McConnell said Wednesday. “And that is one of the things we’re definitely trying to catch up on today.”

What exactly is adjudication and why is it slowing down the entire ballot counting process?

Adjudication must happen when the computer software processing the ballots detects an abnormal ballot. That happens when a voter fills in more than one oval when voting on a single issue, or leaves stray marks or writing on the ballot. Sometimes a ballot is returned blank, or the ovals are filled in with red ink, which the municipality’s ballot scanner can’t read.

Other times, a voter will fill out a ballot and then change their mind about how they want to vote on a particular issue or candidate. They must then cross out the mistaken vote through the oval and candidate name, and then fill in the correct oval. Those corrected votes must also be adjudicated -- verified by human eyes.

The person adjudicating a ballot applies the relevant municipal code to try to determine the voter’s intent.

Ballots are processed in the scanner in batches of about 100, and they stay with their batch, McConnell said. A server, which locked in a cage and not connected to the internet, keeps those scanned ballot images.

If one ballot in a batch needs adjudication, the server holds the entire batch back from being included in a vote tabulation.

Only three people -- the municipal clerk, deputy clerk and the election coordinator -- are allowed to adjudicate, McConnell said.

McConnell said Wednesday she wasn’t sure if there are more ballots this year that need adjudication compared to previous years, because the machine doesn’t tell them a total that needs adjudicating.

Instead, McConnell sits down at a monitor, and images of ballots that need adjudicating appear on the screen one by one.

Elections officials in a Wednesday night statement said that after Tuesday’s unexpectedly low vote count, they investigated the cause and found a large number of ballots needing adjudication.

“Many of these ballots had the oval next to the selected candidate filled in, yet the ovals of all of the other candidates were also filled in and crossed off,” Jones said in the statement.

On Tuesday night, elections workers had scanned in more than 30,000 ballots. But 20,000 remained untabulated -- about 2,000 batches that each contained at least one ballot that needed adjudication, Jones said.

“Now that we understand this issue, we don’t expect issue will slow us down in the rest of this election or in future elections,” Jones said in the statement.

He watched the adjudication process and later said that Jones and McConnell did a great job of explaining the process and the delay.

“Seems pretty good to me,” he said.

Dunbar said he was happy to see that the elections center had counted thousands more ballots by the end of the day Wednesday and that many people had been disappointed in Tuesday’s counted ballot numbers.

“Having a large drop of counted ballots today, I think provides a lot of information that the people of Anchorage are really thirsty for,” he said.

Now, a clearer picture of the election outcome, though not yet certain, is forming, he said.