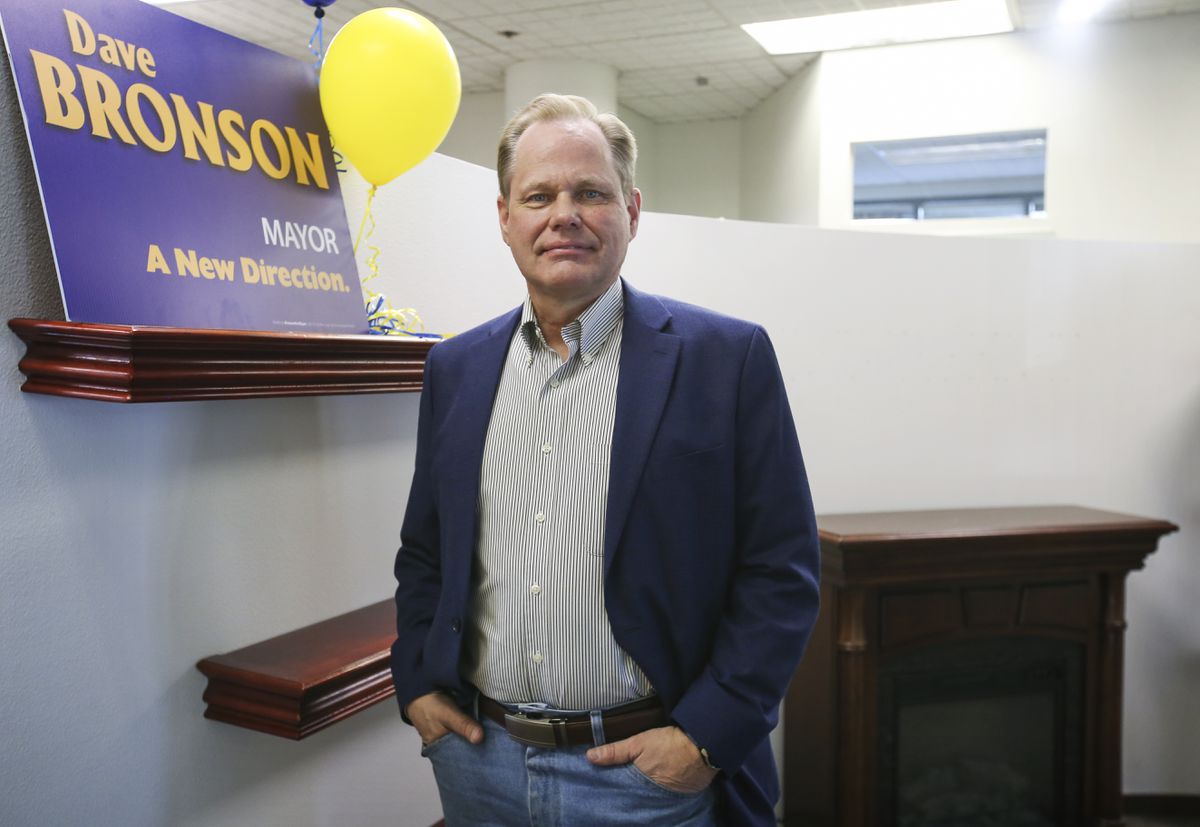 One in a series of articles about candidates in the April 6 Anchorage municipal election.

Dave Bronson, a longtime resident and a candidate for Anchorage mayor, said he had a mild bout of COVID-19 last November. This year, he began to again suffer symptoms — long-term health effects from the virus that became “pretty significant,” including 24/7 headaches and cough, he said.

“It was getting hard to function at a pace you need to run a campaign,” Bronson said.

Bronson’s campaign arose during a surge of criticism and protests over the city’s health mandates and business shutdowns, and its pursuit of using CARES Act funds for purchasing buildings for homeless and treatment services last summer.

Bronson’s own experience with COVID-19 hasn’t affected how he views the pandemic, he said.

Some of Bronson’s opponents have said they see him as representing a far-right agenda, and have said they doubt that he can garner enough support from the middle of the political spectrum in Anchorage to win the election. Bronson disagreed.

“I’m a center-right kind of guy, Bronson said. “That’s where I think the political needle should go to and park, because we certainly don’t need the extremes.”

Bronson said he’s running for mayor to take back Anchorage from an overreaching local government and leadership that he said has damaged the economy. But he doesn’t define that as being far to the right.

[Q&As with candidates for Anchorage mayor and School Board]

“I can’t even define what extreme right means any more,” Bronson said. “I’m certainly not a QAnon type and I’m not an antifa type, obviously.”

The race for mayor is not Bronson’s first foray into local campaigns. In 2011 he ran for an Assembly seat as a Midtown representative and lost against current state Sen. Elvi Gray-Jackson.

Bronson is a former U.S. Air Force and commercial pilot and a 30-year resident of the city.

He was a founding member and former president of the Alaska Family Council, a nonprofit organization focused on conservative Christian values. The council advocates for anti-abortion policies, religious liberties, parental rights and is against same-sex marriage.

If elected, Bronson has promised to revoke all the city’s emergency mandates. Bronson doesn’t think the local government has the right or authority to shut down businesses or churches, or mandate that residents wear masks, he said. The COVID-19 shutdowns infringed on liberty and caused unnecessary harm to the city’s economy, he said.

“We’ve created a huge amount of damage, and I’d like to know the justification,” Bronson said. “So I’m just going to open it up — open up the economy, end the mandates, get us back to work, get everyone back to work fairly, and then try to stimulate the economy to grow as fast as we can, and that’s primarily through our small businesses.”

Some opponents have targeted him for those views, and some local economists have pointed to research that reopening during the pandemic doesn’t mean the economy will bounce back immediately because a portion of the population still feels unsafe.

Assembly member and candidate Forrest Dunbar has, on social media and during candidate forums, publicly called out Bronson for holding campaign events that don’t appear to abide by the city’s health precautions.

[Ballots are in the mail for the Anchorage election. Make sure your vote is counted.]

Photos of the events on social media have shown throngs of people gathering indoors and outdoors, many without masks.

No campaign events or venues where events have been held have been cited by the city’s code enforcers for violating COVID-19 mandates, Katie Scovic, spokeswoman for the mayor’s office, said by email.

Bronson said he provides boxes of masks at all of his campaign events, but said that it’s an individual choice of attendees to wear one. It’s not his job as an aspiring politician to tell people to wear a mask, he said.

“I want to get off this path of collectivism and these government mandates,” Bronson said. “That’s the essence of what I’m talking about here. I think I was doing that, leading by example. It’s just not the direction that, say, Forrest Dunbar would like.”

A bid for conservative leadership

With 15 candidates in the nonpartisan race for mayor, it is unlikely that any candidate will take the required 45% plus one to win the April 6 election outright. That means the top two candidates will move on to a runoff on May 11.

To make it onto the second ballot, Bronson is competing with other candidates who also appeal to more conservative voters, including Mike Robbins and Bill Evans.

Many of Bronson’s supporters amassed on a now-private Facebook group, Save Anchorage, which grew to almost 8,000 members last summer as people protested the city’s building purchase plans. Bronson at the time testified to the Assembly opposing the plan.

His campaign is backed by Assembly member Jamie Allard, another vocal opponent of the COVID-19 emergency orders.

“Mr. Bronson is tapped into a very frustrated and angry part of the electorate that is motivated and supporting him pretty vociferously,” said Evans, a former Republican and Assembly member and self-described fiscal conservative. “It’s just a matter of how big that group is.”

Dunbar has criticized Bronson for his support from Save Anchorage and for what Dunbar called in a recent social media post “anti-mask, anti-science, anti-progress rhetoric.”

Bronson said he doesn’t use social media except for his campaign but knows of the Save Anchorage Facebook group and sees it from his wife’s social media account.

“If they’re a bunch of small-business men and women they have a right to be angry — certainly not violent, no one advocates for that — but speaking their minds, I appreciate that,” Bronson said of Save Anchorage. “And if they support me, I’ll take that support.”

Bronson said he has gathered a swath of support from the “center-right” and from some “old school Democrats” who tell him that their party has been taken from them and who want to “get back to the old way of doing business,” he said.

Bronson and Dunbar both say they see each other as their strongest competitor and the one they will most likely face during a runoff.

A large part of Bronson’s campaign platform is dealing with crime and what he calls a “vagrancy problem.”

“Anchorage has been on a downhill slide for quite a few years now. That manifests itself — long before COVID — as a vagrancy problem, it manifests itself as a crime problem, which in turn engenders or creates an environment where no one wants to invest or reinvest in downtown,” he said.

Homelessness itself is not a crime and should not be criminalized, Bronson said. It’s the “people that are misbehaving, doing illegal things on the street” that are the problem, he said. Though a few thousand people are homeless, many are families that are receiving help from organizations in the city, he said.

He said the individuals he called vagrants are a few hundred people, a subset of the total homeless population, and are “living problematically on our streets.” He said he believes many have issues with addiction, alcohol or psychiatric issues.

The vagrancy issue will take “center stage” in a Bronson administration, he said.

Bronson said he wants to sell any buildings it purchases for homeless and treatment services since the Assembly approved that plan last summer. That includes the Golden Lion Hotel in Midtown, which is slated to become a drug and alcohol treatment center. (The city has not purchased any other buildings so far.)

Many other candidates are proposing their own ways of tackling homelessness, and key opponents are criticizing Bronson’s proposed approach.

“He wants to use the police force and increase the criminalization of homelessness and basically have mass incarceration — that is unconstitutional,” Dunbar said. “It’s also incredibly expensive.”

Bronson in 2015 testified against the city’s ordinance banning discrimination in Anchorage on the basis of sexual orientation and gender identity.

The ordinance passed as the first of its kind in Alaska. It became colloquially known as the “bathroom bill” among opponents concerned with transgender individuals having the right to use the restroom that aligns with their gender identity.

“I don’t think men should be in women’s bathrooms,” Bronson said. “To that degree I think that that should be changed. It is very simple.”

On that and some other issues, Bronson is likely to run into opposition with the current Anchorage Assembly.

But Bronson believes that he and the current Assembly could still work together.

“I probably agree with the Assembly on 80% of the things, it’s the 20% that we disagree on that there’ll be, you know, that we’ll deal with,” Bronson said. “But you know, we all want what’s best for the city. I know I do. I do think we need a different path than we’ve been on for the last several years, and I’m going to take the city on a different path. That’s crystal clear.”