Forrest Dunbar has served on the Anchorage Assembly through a pandemic and protests. He says he’s campaigning for mayor on ‘fact-based leadership.’ 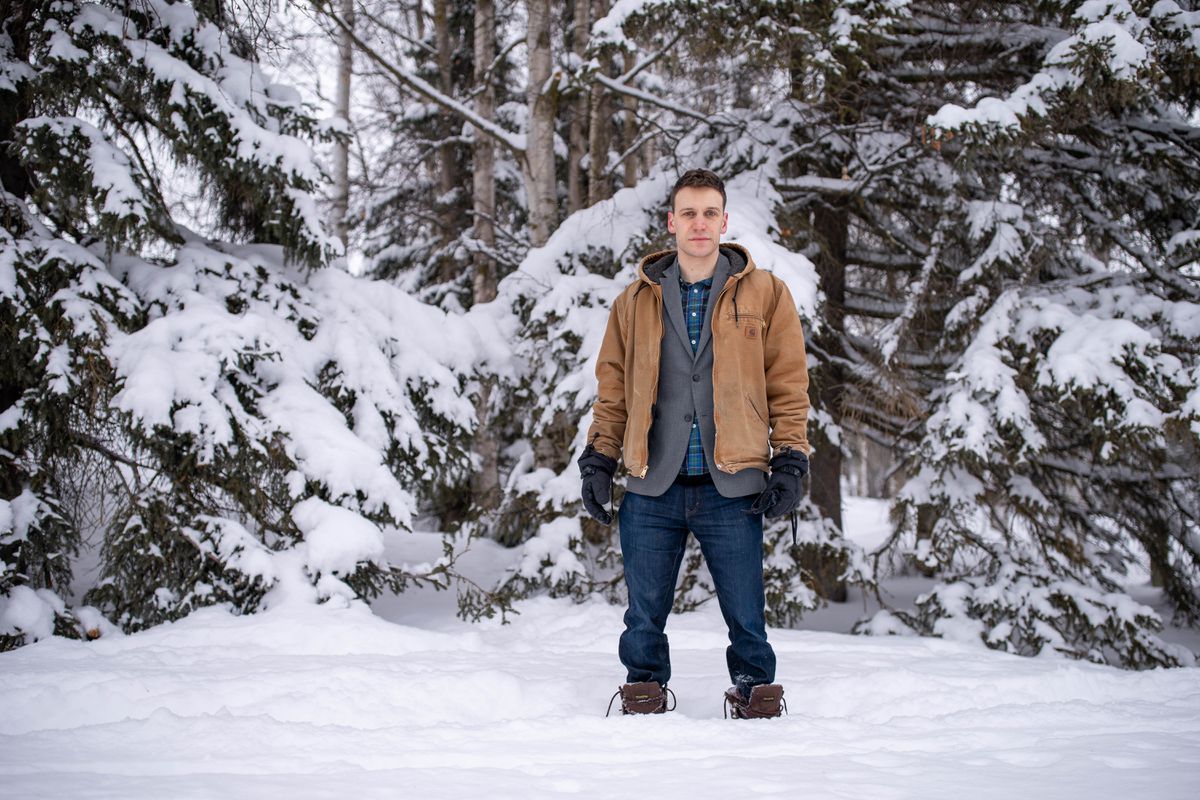 Mayoral candidate Forrest Dunbar is well-known to Anchorage voters. Unlike a number of his opponents in a nonpartisan race for mayor teeming with candidates, Dunbar is already holding office, helping make decisions that have had profound impacts on Anchorage residents over the last year.

The 36-year-old has represented East Anchorage on the Assembly since 2016. Dunbar has largely backed the city’s handling of the pandemic, even as some residents and businesses have protested its emergency orders as too stringent.

Dunbar is centering his campaign on what he terms “fact-based leadership” to move the city past the public health crisis and toward economic recovery. He said he believes most of Anchorage is still with him.

“I do think we will win in the runoff,” Dunbar said in an interview. “We have by far the broadest coalition, and the majority of people in Anchorage do think that COVID was a real threat and that we shouldn’t throw away our shared sacrifice.”

He has been endorsed by multiple unions, including the Alaska AFL-CIO, the Anchorage Firefighters Union, the Anchorage Education Association, as well as the Anchorage Democrats. His campaign has garnered the highest total donations since the campaign began at $312,212, although a few candidates have also raised amounts in the hundreds of thousands.

[2021 Anchorage municipal election guide: Q&As with candidates for mayor and School board]

Dunbar is also an experienced campaigner — in addition to his successful runs for Assembly, in 2014, Dunbar unsuccessfully ran for Congress as a Democrat against Republican Rep. Don Young.

Some of Dunbar’s opponents are working to rally voters against him for decisions he has made as an Assembly member, especially surrounding the pandemic.

Candidates Dave Bronson, Mike Robbins and Bill Evans have positioned themselves as more conservative alternatives to what they say a Dunbar administration would be.

[Anchorage mayoral candidates all want to address homelessness. They’re pitching different ways to go about it.]

They see Dunbar as the top progressive candidate in the race, and the one they will most likely face in a runoff.

“Forrest Dunbar is going to take the left half of the political spectrum on April 6,” Bronson told a crowd at a debate between him, Robbins and Evans hosted by the Alaska Young Republicans in February. “You’ve got to figure out who standing up here can beat him.”

During the debate, Bronson called Dunbar an “extremist.”

Over the last year, Dunbar and the rest of the Assembly have taken votes amid protests and after hours of tense and sometimes unruly public testimony, including votes dealing with the COVID-19 pandemic and the city’s homelessness crisis.

Those decisions have angered some people in the city, who say the Assembly and mayoral administrations have caused long-term harm to the economy and community.

Bronson’s campaign, whose slogan is “A New Direction,” has gained momentum among a group of residents who often show up to Assembly meetings, furious with the city’s previous and current emergency orders, including the citywide mask mandate and restrictions on businesses, and the city’s emergency proclamation, which gives the mayor power to enact the orders.

Dunbar has multiple times voted to uphold the emergency proclamation and the mayor’s powers, which former Mayor Ethan Berkowitz and Acting Mayor Austin Quinn-Davidson used to enact temporary shutdowns of the city and restrictions on businesses in response to spikes in COVID-19 cases.

During more volatile Assembly meetings, Dunbar has occasionally questioned the factual basis of some public testimony. He expressed concern that the conversation had turned into a “platform for disinformation” during a February testimony period on whether the mask mandate should become a city ordinance.

Dunbar said that he will be a mayor for “all of Anchorage, not just for one political party or one political ideology,” and that his administration would listen to everyone.

“Although I will say that there is a particular strain of political ideology that I hope that we can all unify to reject,” Dunbar said. “And that is the kind of QAnon conspiratorial style of politics that led to the Jan. 6 attack on the U.S. Capitol. I hope that we have a shared commitment to facts and to American democracy.”

At a February debate on housing and homelessness, Bronson accused Dunbar of causing devastation to the city’s economy.

Dunbar responded that without the city’s health precautions, the pandemic would have been much worse.

“If 1% of Anchorage were to perish, that’s 3,000 people, if half a percentage point were to perish, again, that’s 1,500 people. Most of them are our most vulnerable communities and our seniors, and that just is not an acceptable price to pay,” Dunbar said.

The city faced tough decisions and had to seek tangible solutions, he said.

“We instituted a mask mandate. We had some ‘hunker-downs.’ We tried to do everything we could to minimize the economic harm, but at the end of the day, the economic harm is caused by the virus,” Dunbar said.

Dunbar said he stands by his decisions.

“I took some tough votes last year on the emergency declaration on the mask mandate on some of our other public health response,” Dunbar said during an interview. “And while none of it is perfect, of course, and there are some things that we could have done better, at the end of the day, we had much better health outcomes in Anchorage than in a lot of other places around the country.”

Evans, a former Assembly member who worked with Dunbar from 2016 to 2017, said in an interview that while he likes and respects Dunbar, Dunbar has made decisions that are “decidedly anti-business.” Similar to the other, more conservative mayoral candidates, Evans said a choice between him and Dunbar would be “whether we want to go in the same direction that we’ve been going or go a different direction.”

Dunbar said during an interview that his administration would not be an exact continuation of the policies of the most recent mayors.

Some policies he said he would continue, like finding ways to fund and support local mental health, addiction treatment and homeless services.

“We can’t go back to the old days before the pandemic when shelter was sort of seen as the end of the road,” he said. “It’s got to be seen as a brief stop on a pathway to more stable housing.”

Last summer, Dunbar also joined Assembly colleagues in voting to pursue a proposal from the Berkowitz administration for the city to purchase four different buildings to use for homeless and treatment services. The Assembly approved the use of CARES Act funds to purchase three of those buildings.

That proposal also became controversial, prompting outcry from Anchorage residents who felt blindsided by the city’s proposal to place those services in their neighborhoods. Some were also upset that the city would use CARES Act money, and said it was inappropriate at a time when businesses were struggling and thousands of residents had lost jobs.

“The COVID-19 virus created a real crisis in homeless services, in shelter and in housing capacity. Because we had to have this social distancing that really reduced the number of available beds,” Dunbar said. “And so I understand why the administration felt that we had to take action, and take action quickly, to prevent people from suffering and dying that winter.”

Complaints about the use of the money prompted the U.S. Department of Treasury to intervene, although eventually the matter was resolved.

Dunbar acknowledged some mistakes were made. He faulted the city’s communication about the proposal and its timing, as well as the move to introduce zoning ordinances during the process, which elicited more outcry. Two buildings the city later found needed significant work, and Dunbar said those were not the right buildings to pursue.

Still Dunbar defends the Assembly’s decision to approve funding. Less than 10% of the CARES Act money would go to the project, while the majority went to small businesses and individuals through grants and rental and mortgage assistance, he said.

Dunbar’s opponents are also targeting him over other policies that have moved forward while he has been in office, including the city’s new alcohol tax, which was enacted by voters during last year’s election, and his support last summer of the Assembly’s ban on “conversion therapy” in the city, which is the practice of trying to change a minor’s sexual orientation or gender identity.

Dunbar contends that he is “fairly mainstream” policy maker.

He also doesn’t believe that the majority of the city will ascribe to what some of the other mayoral campaigns are promoting.

Dunbar has said he sees Bronson as his biggest threat -- the candidate he will most likely face in a runoff -- and some of Dunbar’s loudest critics have rallied behind Bronson’s campaign.

Bronson’s support “does represent a significant portion of the Republican base at the moment. And because there are so many people in the race, I think that’s going to carry him into the runoff,” Dunbar said.

Dunbar said he is convinced he will carry enough of the vote to make it to a runoff.

Then, that runoff will be a “five week sprint,” Dunbar said -- a short time to show his “positive vision for Anchorage” and convince voters to choose him.

“It’s going to be volatile,” Dunbar said. “...The runoff will be a tough fight.”