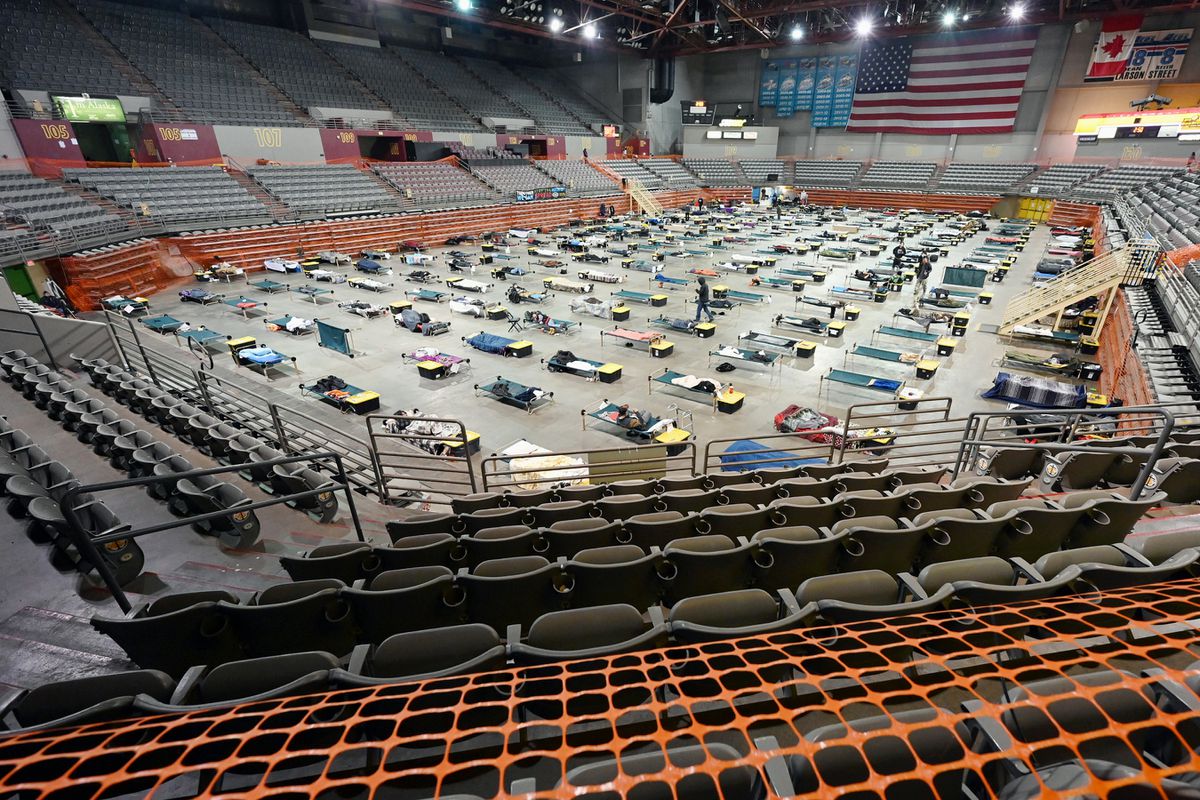 Cots on the floor of the mass emergency shelter operated by Bean's Cafe in the Sullivan Arena in February 2021. (Bill Roth / ADN)

Cots on the floor of the mass emergency shelter operated by Bean's Cafe in the Sullivan Arena in February 2021. (Bill Roth / ADN)

The Anchorage Assembly is again considering a change to its land use code that would expand where homeless shelters could be located in the city, after shelving a similar, controversial ordinance last summer.

This time, the proposed ordinance is paired with another ordinance that city officials say would better regulate homeless shelters by adding a licensing requirement.

The Assembly is scheduled to consider the ordinances at its meeting on June 8. First, the Assembly is holding two town halls at the Dena’ina Center, from 6 p.m. to 9 p.m. on Tuesday and Thursday, to hear from the public and collect input on the ordinances. The town halls will also be livestreamed on the city’s YouTube channel.

City officials say that the current proposed ordinances are critical to solving Anchorage’s persistent homelessness crisis and that they are trying to find a new way forward -- one that won’t evoke recent problems of the past.

Meanwhile, the city is up against a deadline to dismantle the mass shelter at Sullivan Arena by the end of September, adding pressure to find a new large shelter or other options for the 400 people housed there each night.

[ A year in, Sullivan Arena may be the biggest mass homeless shelter in the nation. What happens next? ]

The city’s proposed land use change last summer unleashed a torrent of opposition and protests from residents concerned that new shelters would lead to increases in crime, loitering and decreases to property values in their neighborhoods.

Opponents had said the use of federal relief funds was illegal. Following complaints about the city’s plan, the U.S. Department of Treasury’s Office of the Inspector General reviewed the plan. Treasury officials later suggested the city use the federal funds for its first responder payroll instead, and use city money that would have gone to that payroll for the building purchases.

The Assembly also approved the purchase of the Best Western Golden Lion Inn for the creation of an alcohol and drug treatment center, using funds from the sale of Municipal Light & Power. That purchase was finalized in December.

Of the four buildings it pursued, it is the only one the city has bought so far.

Opposition to the current proposed land-use change is already growing among some city residents, along with some spreading of misinformation about the ordinances, Assembly Vice Chair John Weddleton said.

Community councils across the city have seen resolutions introduced in support of and against the proposed changes.

And some homeless services providers say the city should postpone implementing license requirements for shelters at a time when more shelter space is desperately needed.

Assembly members are bracing for what could be another outpouring of public testimony before the vote.

What does the land use change do?

The ordinance would amend land use code to allow new homeless shelters in areas zoned as “B-3” business districts. B-3 areas are scattered throughout Anchorage, with the largest portion in Midtown.

Shelters would be allowed in the high density business districts only after obtaining a conditional use permit through the city, Rivera said.

“That, of course, has its own extensive public process,” he said.

Weddleton said that the city’s Planning and Zoning Commission can add “any number of requirements” to a conditional use permit, such as requiring a fence of a certain height on a shelter property adjacent to residential neighborhood.

According to the proposed ordinance, there are also a number of other requirements that shelters would have to meet to get a permit, including being more than 500 feet from other homeless and transient shelters and within a quarter mile of a public transit route. They would also be required to have onsite storage for personal belongings.

Currently shelters can only exist in “public lands and institutions” zoning districts. Those lands are scarce and already largely developed, city officials say.

It is difficult — practically impossible — to find new locations for shelters without a zoning change, they say.

The acting mayor last week released a plan to transition out of the Sullivan, which includes a contract to purchase the old Alaska Club building on Tudor Road in Midtown to become a 125-bed congregate shelter.

That building is in a B-3 district, near businesses and a residential neighborhood. The ordinance is required for the Alaska Club to work long-term as a congregate shelter, according to an emailed statement from Ira Slomski-Pritz, special assistant to the acting mayor.

What is different about this proposal from the last time?

That land use change is paired with another proposed ordinance that would place licensing requirements on homeless shelters, giving the city more oversight and neighbors of shelters more recourse if things go awry, officials say.

It’s a sticking point for some Assembly members who do not want to see the land use change passed without it.

Assembly member Chris Constant, who represents downtown, said he could not supported the B-3 zoning change without the current proposed companion ordinance.

“That’s just simply because I’ve been down this road, and the concerns of the public — who have been loud and very assertive — are fair concerns,” he said.

Overburdened homeless services concentrated in the downtown area led to camping, loitering and crime on nearby streets.

“Most shelters do not cause problems. But we saw what happened at the Brother Francis, Bean’s Cafe complex down there and it destroyed the neighborhood — there’s no question,” Weddleton said. “And that’s what people look at when they think shelter in Anchorage.”

Weddleton said that licensing shelters would help prevent anything similar happening in Anchorage and help residents have a voice in the process.

“By adding the licensing components we are directly not doing what we have done before,” Constant said.

Requirements under the ordinance include shelters having a “good neighbor policy” that details plans for community communication, minimizing neighborhood impacts, including policing of trash and loitering on or near the premises.

As written, the city would also have a “no tolerance” commitment, requiring law and code enforcement to help prevent unlawful loitering, soliciting in streets or roadways, or unauthorized camping within a quarter mile of the licensed shelter.

The ordinance could also help establish advisory committees for shelters to help “all of the different parties work out their concerns,” Rivera said.

Rivera said that the city would have the authority to revoke conditional use permits and shelter licenses if concerns aren’t adequately addressed.

“It’s really critical that, with new shelter coming on board, we provide some pretty strict regulation to ensure community safety and neighborhood safety and client safety,” Rivera said.

The ordinance, as written, would require shelters to be licensed by Jan. 1, 2023.

Now, shelters are operating at lower capacities and more are open during the daytime — a key component to keeping individuals experiencing homelessness off the streets.

But that means more shelter space is needed, and Sauder said she’s worried that a licensing requirement would deter new shelters and strain existing ones.

“We are still trying to figure out how to demobilize the Sullivan arena and find enough space for people,” Sauder said. “To do anything to put more restrictions or requirements on privately funded shelters, is really concerning for me.”

Sauder and other homeless service providers implored the city to postpone considering the licensing requirements in a letter to the Assembly.

“We are very concerned that this effort at licensing will lead to a decrease in shelter supply at what promises to be a very critical time in our city,” they wrote.

Conversely, some residents worried about shelters in their neighborhoods have also urged the Assembly not to pass the zoning change.

After a lengthy process including public input, the Planning and Zoning Commission in March approved the proposed changes and passed them to the Assembly for consideration, Rivera said.

The commission received an array of public testimony. Some voiced support and many opposed the land use change. Written testimony sometimes referenced problems near the Brother Francis Shelter, expressing worries about crime and impacts to businesses and residential areas with children.