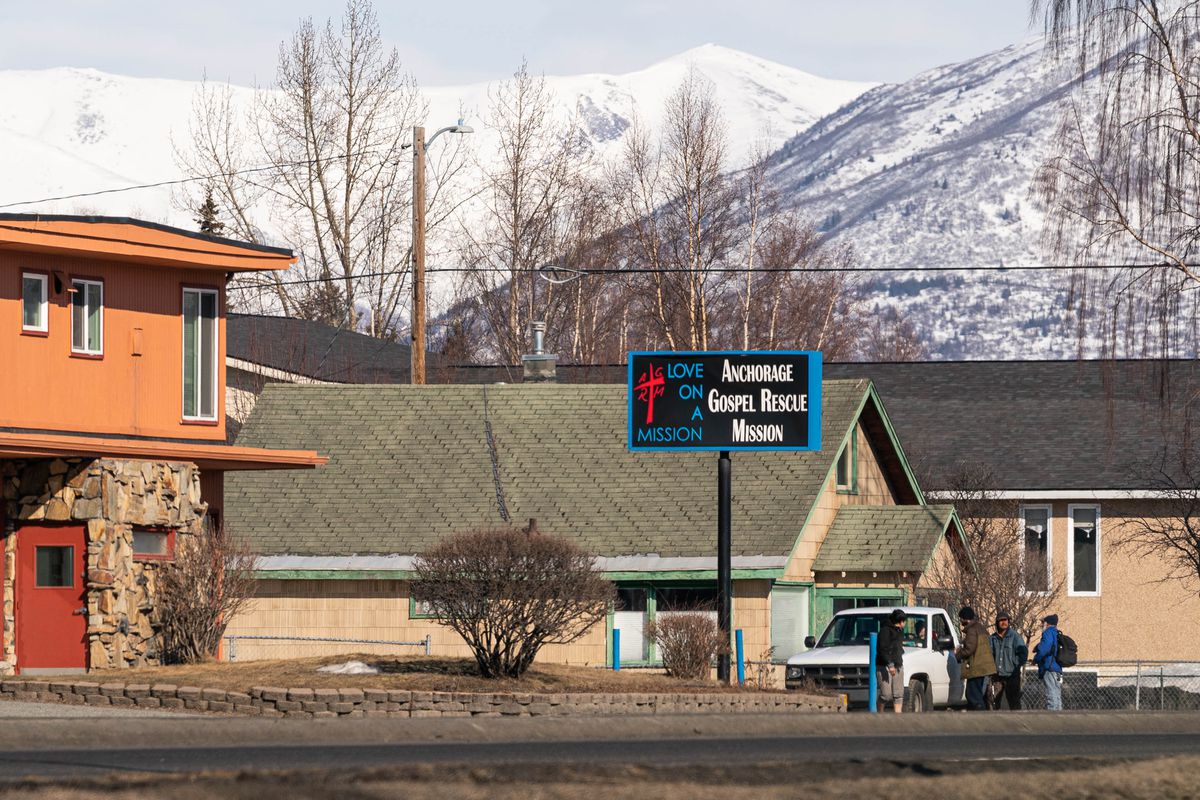 Anchorage city officials say a proposed ordinance that would require homeless shelters to obtain a city license will help reduce a shelter’s potential negative footprint in neighboring areas. They say it would help to ensure that shelter users, nearby businesses and residents are all kept safe.

But some Anchorage homeless shelter providers say the proposal could stymie the city’s efforts to increase its shelter capacity at a time when finding more beds is critical. Several homeless service providers, including the Anchorage Gospel Rescue Mission and Bean’s Cafe, signed a letter to the Assembly asking it to postpone the licensing ordinance.

“This piece of legislation or ordinance will suppress — not help — the homeless people in this town,” Ralph Nobrega, vice president of the Gospel Rescue Mission’s board of trustees, told the Assembly on Tuesday at a town hall discussion on the ordinance.

Shelters would be required to be licensed by Jan. 1, 2023, as the ordinance is currently written. To get a license, shelters would have to have insurance, comply with a background check requirement and institute a “good neighbor policy,” outlining its plan to reduce impacts on surrounding areas, for example, among other requirements.

Some shelter providers say they are worried that adding more requirements through the licensing process could burden their already-strained resources with a new bureaucratic layer. They fear the requirements could discourage new, privately run shelters from opening.

But the city faces pushback from some residents and business owners worried about the impacts of new shelters on their neighborhoods. The Assembly is also considering a companion ordinance that would expand where shelters can be located in the city, allowing shelters to open in “B3″ zoned business districts through a conditional use permitting process.

Many on the Assembly say licensing shelters is a necessary step toward rebuilding public trust and improving the city’s approach to its worsening homelessness crisis.

Assembly members also say they are continuing to work on the proposed ordinance and incorporate feedback.

Assembly Vice Chair John Weddleton, a sponsor of the shelter licensing ordinance, has said that problems in recent years near the Brother Francis Shelter and Bean’s Cafe soup kitchen downtown “destroyed the neighborhood.” The city had little recourse to address neighborhood concerns through the shelter’s conditional use permit, he said.

“We had no tools. There was no speed limit,” Weddleton said at Tuesday’s town hall. “... So these shelter licenses are an attempt to find a way to give us a tool where we can stop problem shelters.”

The community debate is unfolding this week as the Assembly prepares to vote on the pair of ordinances next Tuesday, June 8. On Thursday at 6 p.m., it scheduled a town hall at the Dena’ina Center on the ordinances, in addition to one held Tuesday.

The city is in the midst of trying to stand down the Sullivan Arena emergency shelter by the end of the summer, where about 400 people sleep each night. Putting more restrictions and requirements on privately funded shelters at the same time is concerning, said Lisa Sauder, CEO of Bean’s Cafe.

Jasmine Boyle, executive director of the Anchorage Coalition to End Homelessness, said that the COVID-19 pandemic caused thousands more people to experience homelessness in Anchorage than during previous years.

Boyle said that the coalition has not taken a stance on the drafted ordinance because it is not yet in its final form, although Boyle said she is personally concerned about the timing.

“The shelter system has always been underfunded and under-resourced and the pressure that COVID put on the system was incredible — beyond expectation — and then to add shelter licensing on top of that in the middle of a crisis seems like challenging timing,” she said.

Still, shelter licensing can be a good thing in the right community, she said.

“Our partners in city government perceive that shelter licensing would allow a balance, would allow us a way to bring new shelters into new neighborhoods and reduce community impact,” she said.

When done right, licensing can increase the safety of the clinical services provided and improve the well-being of clients in the shelters and the surrounding neighborhoods, Boyle said.

“So I think, on paper, the theory, the philosophies, it can make that happen if done properly,” Boyle said.

At the Tuesday town hall, Weddleton said the ordinance is a “live document.”

Assembly member Chris Constant, another sponsor of the ordinance, said that he is willing to work “to get to the least restrictive means of achieving the goal,” he said.

“We need these tools. We need places for people to go, and we need to help them find a way to do their work,” he said.

Nobrega said that he is worried that requirements for background checks for volunteers could deter many families from helping the at the Anchorage Gospel Rescue Mission.

He also worries about language in the legislation that includes “barrier crimes” — a criminal offense that prohibits a provider or an applicant from being approved for a license. Many of the shelter’s employees have been convicted of barrier crimes but have been through the mission’s recovery program, he said.

Assembly member Meg Zaletel, another ordinance sponsor, said that as written, the city’s health department director would oversee licensing and could issue waivers for many of the requirements, especially if the shelter is already accredited, she said.

Generally, the state regulates care facilities, but homeless shelters are “the only unregulated care we have,” she said.

Weddleton said that currently, shelters are operating in the city largely without problems. The proposal is about moving the city forward and creating more resources for the homeless while keeping neighborhoods safe.

The Brother Francis Shelter, which is run by Catholic Social Services, is now operating with greatly reduced impact on the surrounding neighborhood, he said.

That is in part due to changes the shelter implemented during the COVID-19 pandemic, such as reducing its capacity from 240 to about 70, and remaining open during the daytime, keeping people off the streets, said Lisa Aquino, chief executive officer with Catholic Social Services.

The Sullivan Arena shelter has provided beds for homeless individuals, many whose only recourse previously would have been the Brother Francis Shelter.

Aquino said that a confluence of issues, including rising homelessness in the city with few available resources, drove people to the overburdened shelter and nearby soup kitchen. That culminated in the neighborhood issues, like people sleeping on the streets and camping nearby.

The ordinance would require shelters like the Brother Francis to have a “good neighbor policy” that details plans for community communication and minimizing neighborhood impacts, including policing of trash and loitering on or near the premises.

“The good neighbor policy that’s required is only holding the shelter operator, and no one else, accountable for the issues outside,” Aquino said. “Homelessness is a community-wide issue that the whole community has a role in addressing.”

Aquino said that she appreciates the city putting resources and effort toward reducing homelessness and that local government has a responsibility to do so.

Still, she said she worries that even with the legislation, the problems once seen outside of the Brother Francis Shelter could arise again without more homeless resources in the city and a community-wide effort to seek solutions.

As written now, Aquino said that she doesn’t believe the ordinance gets to the heart of the city’s issues and will not solve the problems in neighborhoods around shelters.

“We’ve learned a lot from the past and we want to assure in the future that we have safe, healthy neighborhoods and shelters for everyone who needs it in the city. And so we want to work together to find that solution,” she said.