Alaska faces a pilot shortage. Could the state become a proving ground for pilotless aircraft? 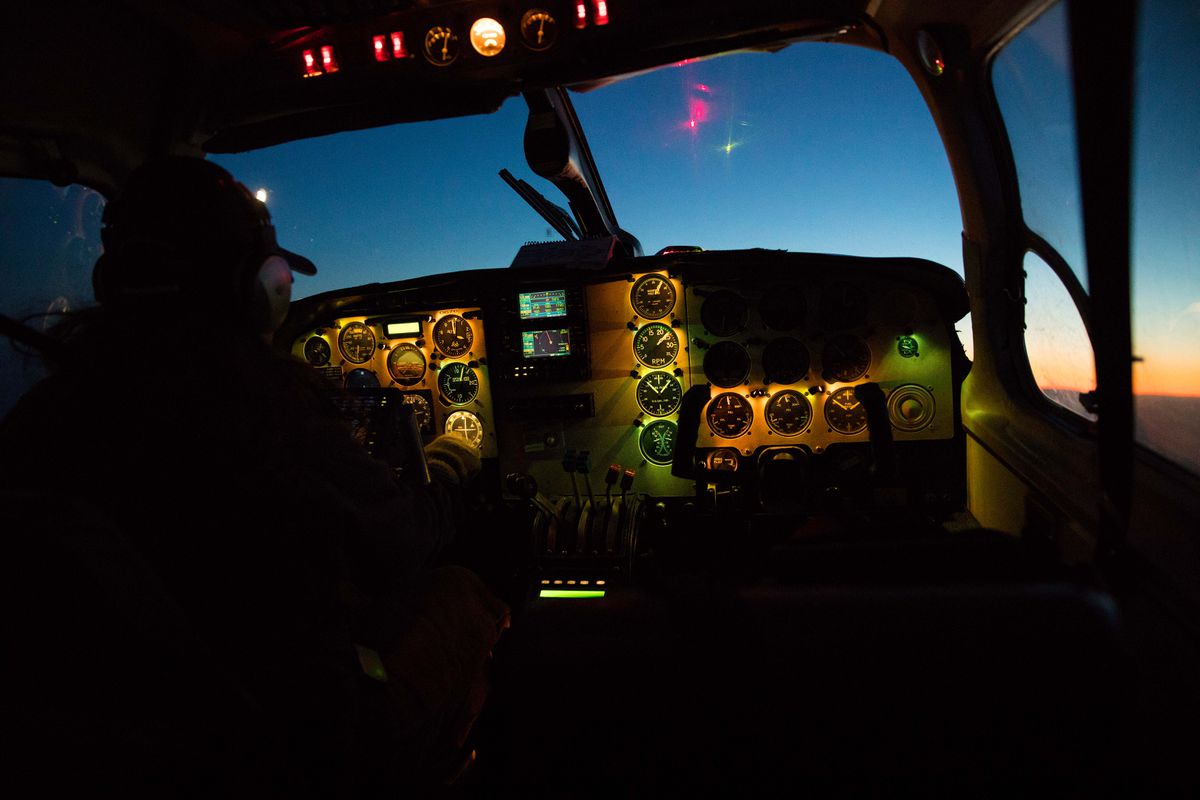 A pilot for Warbelows Air leaves Beaver en route to Fairbanks on Dec. 5. A wave of baby boomer retirements and the growth of aviation in Asia has led to a pilot shortage that is rippling across Alaska with gale force. (Ruth Fremson/The New York Times)

A pilot for Warbelows Air leaves Beaver en route to Fairbanks on Dec. 5. A wave of baby boomer retirements and the growth of aviation in Asia has led to a pilot shortage that is rippling across Alaska with gale force. (Ruth Fremson/The New York Times)

FAIRBANKS — Never climb into an airplane cockpit in winter without your best military-grade Arctic boots, rated to 60 below. Green, cocky pilots fresh from the Lower 48 tend to forget that rule — but just once.

Knowing when not to climb aboard the plane at all is harder and comes only with deeper experience.

"If my gut tells me this is not good, we don't go," said Matt Anderson, 55, who has spent more than 25 years flying small planes across Alaska's wild, vast and hazardous landscapes.

Generations of pilots like Anderson once came north for adventure, and to hone their skills in small planes, flying the Alaska Bush in the nation's most aviation-dependent state. Their derring-do, in turn, helped create the Alaska mystique.

But now a shortage of pilots — global in scope, fueled by the growth of aviation in Asia and a wave of baby boomer retirements — is rippling across Alaska. A state with six times as many pilots per capita as the rest of the nation, and the need for every one of them to connect its many far-flung dots on the map, is rewriting the equations of supply and demand.

[With a possible pilot shortage looming, some in Alaska are especially concerned]

Competition is pushing up salaries and luring pilots and mechanics to jobs in the Lower 48. Airlines are grooming pilots from within, bypassing the old system that made Alaska a proving ground where a pilot could log the thousands of hours of flight time needed to qualify for a major airline job.

International freight haulers have also hired away Alaska pilots as Anchorage, which has the fourth-busiest air-freight airport in the world in annual tonnage, has become a refueling and crew-change hub for aircraft flying between Asia and North America.

"The pilot shortage is affecting the whole commercial aviation industry from the beginning to the end, the small to the large, and I think Alaska is going to get hit hard," said Bill Thompson, 47, who left the state in 2015 for a job with a regional airline in Minneapolis.

From 2011 to 2015, Alaska lost about 12 percent of its commercial-pilot workforce, which was, in fact, slightly less severe than the 16 percent falloff rate for the nation as a whole, according to federal figures.

But flying is the lifeblood of commerce, government and society in a state twice the size of Texas with hundreds of communities beyond the road system. Gov. Bill Walker jokes he has three offices: in Juneau, the capital; in Anchorage, the biggest city; and on a plane getting back and forth.

Or consider, for example, the small passenger and freight airline called Warbelow's Air, based here in Fairbanks in Interior Alaska. The company needs about nine full-time pilots to meet its weekly schedule, serving tiny towns north of the Arctic Circle and beyond.

But nine pilots these days have become hard to come by. So this year, the company began recruiting Air National Guard pilots to work part-time on their days off, with six part-timers adding up to one full-time pilot.

"One pilot out of six, that's how we fix that problem," said Greg Probst, Warbelow's chief pilot.

Matt Gallagher, a Warbelow's pilot since 2014, is leaving next spring for a job in Colorado to be closer to his family and to seize the chance to move on to bigger and faster aircraft.

"I want to fly jets that go 40,000 feet in the air for two hours at a time," Gallagher said. "There are great opportunities for guys like me."

That flying small planes in Alaska is a very dangerous line of work is part of the shifting dynamic. From 1990 to 2009, more than a third of all commuter and air taxi crashes in the nation, and about a fifth of the fatal crashes, occurred in Alaska, according to federal figures.

With only about 730,000 people, Alaska has less than a quarter of 1 percent of the nation's population.

The state's plane crashes and flat-out disappearances are the stuff of legend. In 2012, a military transport plane missing since 1952 was found on a melting glacier. A plane that left Anchorage for Juneau in 1972 carrying two members of Congress, Reps. Hale Boggs of Louisiana — the House majority leader at the time — and Nick Begich of Alaska, has yet to be found.

Just this year there have been 91 aircraft accidents or incidents in the state, according to the National Transportation Safety Board, 13 with one or more fatalities. Alaska also has most of the nation's active volcanoes, which can spew corrosive ash into flight paths and engines; Bogoslof, in the Aleutian Islands, erupted in December.

Those hazards, on top of a worsening pilot shortage, are making some researchers and entrepreneurs see opportunity for pilotless drone aircraft to fill the gap, especially for work that pilots refer to as "the three D's": flying jobs that are dirty, dull or dangerous.

The University of Alaska Fairbanks' Geophysical Institute's Center for Unmanned Aircraft Systems Integration, one of six federal drone research centers, is testing aircraft in frigid conditions and flying unmanned craft hundreds of miles over Arctic waters. Oil companies are starting to deploy drones to patrol pipelines for leaks or other damage.

Researchers and pilots say they see a time — sooner or later, depending on when federal safety regulation might allow it — when mail, medicine or groceries might be delivered to remote villages by drone.

"Is it technologically feasible to do it right now? The answer is yes," said Nickolas D. Macchiarella, a professor of aeronautical science at Embry-Riddle Aeronautical University in Daytona Beach, Florida. "And one of the first places it could occur is Alaska."

Ben Kellie, 30, with his brother Nick, 27, founded a drone company, K2 Dronotics, in Anchorage last year. Their father, Mike Kellie, was a swashbuckling bush pilot of the old school, they said, who arrived in Alaska with a duffel bag and $500 to his name, wanting only to fly.

Drones, said Ben Kellie, the company's CEO and chief engineer, are the future and are less likely to produce injuries or harm if they crash.

"In Alaska, you can fly for hundreds of miles, and if you have issues you're going to hit tundra or a spruce tree," he said.

Carl France once considered the pilot's life, but decided that the future was pilotless.

"I decided I'd get bored, flying back and forth from the same place," said France, 30, CEO of a drone startup called Aquilo, based in Fairbanks and founded by UAF engineers.

Aquilo and K2 Dronotics are both focused, at least for now, on commercial data collection — Aquilo in scientific and industrial applications, K2 Dronotics in remote-area mapping.

Anderson and his wife, Loretta Fogg, 55, who is also a commercial pilot, said the idiosyncrasies of Alaska — the weather, the terrain, the difficulty in getting help if trouble arises — bred a mentality of improvisation and intuition about how to keep passengers and oneself safe.

In flying small planes, often with fewer than nine passengers — likely as not to repeat customers traveling to and from villages — the pilots get to know people and their lives. With pilots increasingly being drawn to greener — and warmer — pastures, some of that old hands-on intimacy and continuity could fade.

"I know families, and I know their kids," Anderson said. "Where else are you going to get that?"