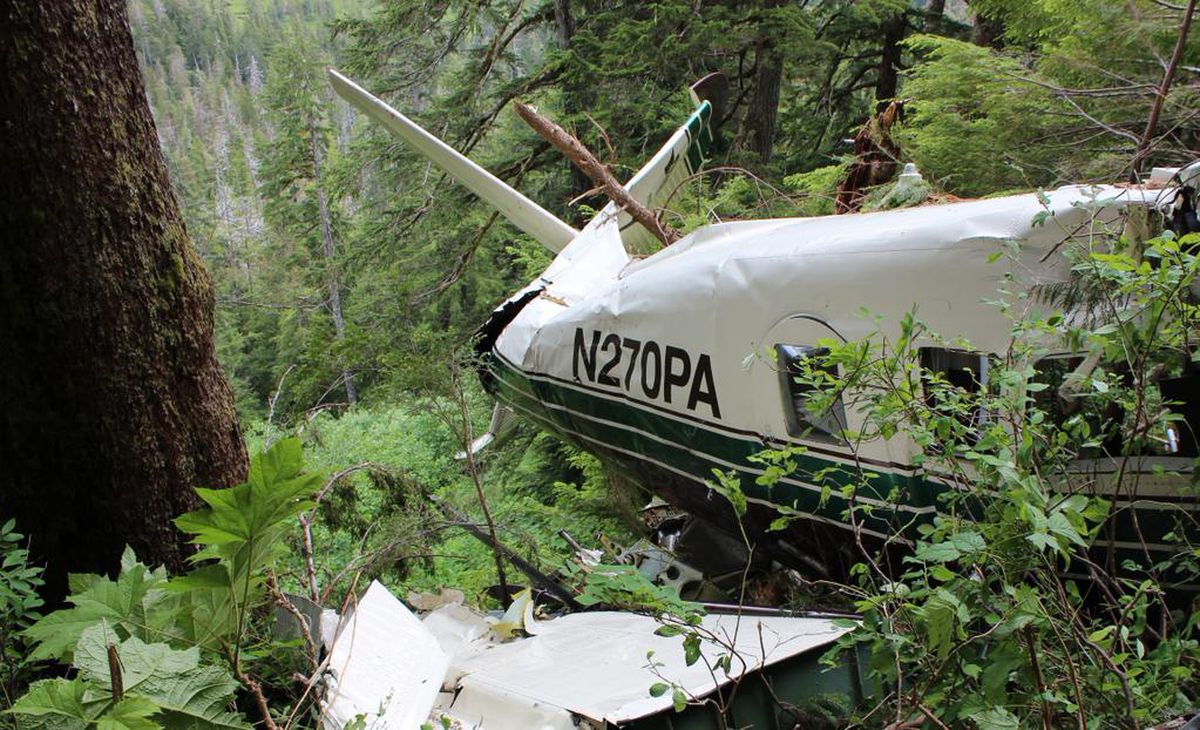 The wreckage of a flightseeing plane operated by Promech Air that crashed near Ketchikan on June 25, 2015. (NTSB photo)

The wreckage of a flightseeing plane operated by Promech Air that crashed near Ketchikan on June 25, 2015. (NTSB photo)

A floatplane pilot for a Ketchikan-based air tour operator and the company's safety "culture" were directly responsible for the 2015 crash that killed him and eight cruise-ship passengers, the National Transportation Safety Board found Tuesday.

Meeting in Washington, D.C., the board's four current members unanimously found the cause of the June 25, 2015, crash was Promech Air pilot Bryan Krill's "decision to continue visual flight into an area of instrument meteorological conditions that resulted in geographic disorientation and controlled flight into terrain."

The de Havilland Otter slammed into a mountainside near Ella Lake, roughly 20 miles northeast of Ketchikan, on its return from Misty Fjords National Monument in what an NTSB final report called "deteriorating weather conditions" and overcast skies.

It was carrying a group of passengers on a shore-excursion from Holland America Line's MS Westerdam.

The board also blamed the crash on a Promech company culture that "tacitly endorsed flying in hazardous weather and failed to manage the risk associated with the competitive pressures affecting Ketchikan-area air tour operators."

The company's lack of a formal safety program and its inadequate protocol for releasing flights for departure were also cited.

After about two hours of discussion during Tuesday's meeting, NTSB staff proposed citing Promech's approach to safety — in which some pilots reported being pressured to fly despite poor weather — as a contributing factor to the crash. Robert Sumwalt, the board's acting chair, asked those issues be upgraded to a causal factor of the crash, which members unanimously approved.

"Promech and at least one other operator that was willing to take more weather-related risks were both able to fly more revenue passengers than two other more conservative operators who cancelled flights that day," the NTSB said in a statement on the findings Tuesday.

Speaking by phone after the hearing, Sumwalt said Promech's actions resonated with board members, who didn't meet as a group to discuss the crash until Tuesday.

"My philosophy is that people don't make errors in a vacuum and there's oftentimes organizational issues, that they are part of a system — it's just too easy to say, 'The pilot screwed up,' and I want to understand these underlying issues," Sumwalt said.

During the hearing, investigator William Bramble described a series of incidents reported to NTSB by Promech pilots, including one in which the head of Promech expressed "frustration" when a plane returned to Ketchikan from Rudyerd Bay by a safer "long route" that took five minutes more than the "short route" on which Krill's plane crashed.

Pilots also said that Promech's assistant chief pilot told other pilots they would have to bend the rules because they were flying in Alaska.

"It suggests that, although some of the managers may have been talking the talk, they were not collectively walking the walk of setting good expectations for safety-oriented behaviors," Bramble said.

Promech's Alaska operations were purchased in 2016 by Taquan Air, a competing carrier in Ketchikan. Four Promech employees are now employed by Taquan, none in leadership positions, according to George Curtis, director of operations for Taquan.

He noted all new employees must go through training on Taquan's policies and procedures, "regardless of past experience."

Taquan offered its condolences Tuesday to friends and family of those killed in the crash.

"This is a heavy reminder that passenger safety is our No. 1 responsibility, as well as the importance of safety protocol during flight operations in Alaska's constantly changing weather landscape," Taquan officials said in a statement. "Taquan Air acknowledges the issues the NTSB has identified and will continue to conduct flight operations that propagate our company culture of safety."

Taquan had canceled all of its own tour flights due to weather on the day of the Promech crash, according to NTSB documents.

Members of the board questioned about a dozen NTSB staff members who were on hand to discuss various elements of the crash, including Alaska-based investigators Brice Banning and Shaun Williams.

During Tuesday's hearing, Banning was asked what it would take to prevent frequent "nuisance" alerts from planes' terrain avoidance and warning systems, which likely led to their being manually disengaged in the Promech crash as well as a fatal Wings of Alaska crash near Juneau weeks later.

"To be completely honest, I don't know," Banning said. "I know that we need to limit the nuisance alerts so that pilots will quit inhibiting this equipment that could very likely prevent an accident like this."

Board members also discussed competitive and time pressures among air tour operators in Ketchikan, including the fact Promech's flights were running too late on the day of the crash to return by the 12:30 p.m. "all-aboard" time for the Westerdam to leave Ketchikan.

Missing the deadline meant Promech would have to transport the passengers to their ship's next port of call at its own expense.

"Lives depended on the pilot's decision-making," Sumwalt said in the NTSB statement. "Pilot decisions are informed, for better or worse, by their company's culture. This company allowed competitive pressure to overwhelm the common-sense needs of passenger safety in its operations."

Curtis, director of operations at Taquan, said for his company, flights that might cut close to the all-aboard time are usually coordinated with cruise ship personnel.

"Generally the ship will wait. If the ship must leave on time and our estimated return time is expected to exceed the all aboard time the flight is cancelled," Curtis said in an email Tuesday.

Tuesday's findings also reiterated previous recommendations that carriers like Promech be required to implement formal safety management systems, as well as install cockpit voice and video recorders in aircraft, after the fatal Promech flight was only partially recorded on passengers' smartphones.

Sumwalt, a former airline pilot with 14,000 flight hours and 32 years of experience, said his call for Promech's culture to be considered a causal factor in the crash was personal.

"I had just met with family members who lost loved ones on this tragedy and as I was speaking I was looking directly at family members in the audience," Sumwalt said. "Our goal is to ensure that other people don't have to undergo the tragedy that these folks have undergone."

The board will convene an Alaska meeting this summer on a crash that killed all three people aboard on a flight near Togiak in October. The meeting is tentatively set for August in Anchorage.